Heidi and Michael Bender are eager to open the doors to Split Rock Books on Main Street in Cold Spring — the village’s first bookstore since Merritt Books left in 2008 — but last week were waiting on a crucial piece of equipment: Shelves. 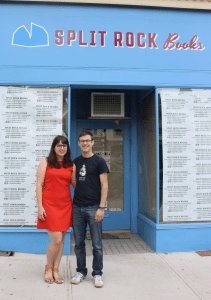 Heidi and Michael Bender in front of the future home of Split Rock Books at 97 Main St. (Photo by A. Rooney)

Besides the carpenter, they also had an appointment on Wednesday (May 30) with the sign painter.

“The hardest part [about the preparations] has been not being able to work in a bookstore every day,” says Heidi. “We can’t wait to open.”

They expect that to happen this month. The couple, who were married last year in Garrison before moving to Cold Spring from Brooklyn, have no illusions about the challenges of owning a bookstore in a small village, or anywhere. Both are experienced booksellers.

“Some people love books and have great intentions, but it’s a lot of hard work, navigating people and situations,” says Michael. People don’t imagine “the constant cleaning of the bathroom, the red wine spilled over books, the kid chewing on a book, the sweating from lifting things all day.”

Heidi adds, with a laugh: “After all that, if you still love it, and you love the customers, it’s working for you.” She says her “endorphin moments” are when she recommends a book that a customer loves.

The store, which will be located at 97 Main St., the former home of The Country Touch, is named for a trail in Nelsonville: the couple saw parallels between a split rock and an open book. They envision the store as “a place to explore and find things you didn’t know you wanted.”

The Split Rock stock will include fiction, nonfiction, history, politics, wellness and spirituality, poetry and graphic novels, as well as local interests such as farming and gardening. There will be books from independent presses and “books that get overshadowed and books you know you deserve more attention,” says Heidi.

We asked booksellers Heidi and Michael Bender to recommend a children’s title, a novel and a work of nonfiction.

“Beautifully illustrated, this picture book leads children through all the choices they can make in a day. It’s full of familiar objects and is a fun way for parents and caregivers to engage with their little ones.”

“Filled with the swampy, humid heat of her home state and peopled with stubborn women, snakes and raw natural life, each one of these stories leads you deep into the inner lives of its characters and leaves you wanting more.”

Rat F**ked: Why Your Vote Doesn’t Count, by David Daley

“A thorough, compelling look at gerrymandering. Daley convincingly shows how smaller elections like state legislatures and governors, combined with biased redistricting, can affect who ends up controlling Congress for a decade or more.”

Though thousands of books have already arrived, there will be plenty of fine-tuning after “we discover what people around here love,” says Michael. They plan to host storytimes for younger readers, book groups for adults and middle readers (8- to 12-year-olds), and readings.

Michael, who grew up near New Haven, Connecticut, and majored in history at Fordham, had his first taste of bookselling as a clerk at a Barnes & Noble. While earning a master’s in library science at Long Island University, he worked at Ursus, a rare book dealer in Manhattan, and Brooklyn’s Bergen Street Comics, which specialized in comics and graphic novels. He also was employed at the New York University library.

“I liked sharing the excitement over books in bookstores, but found the NYU job isolating,” he recalls.

He left the library and, after Bergen Street Books closed, found a job at Community Bookstore in Park Slope, which was founded in 1971. (The original owner still lives over the shop.)

“That cemented it,” he says. “I didn’t want to do anything else.”

Heidi, a native of Connecticut and western Massachusetts, earned a degree in English literature from Vassar. After spending time in Paris and Thailand, she took a job at Book Culture in Manhattan. She decamped to Auckland, New Zealand, where she obtained a master’s degree in poetry, while employed at Unity Books there. 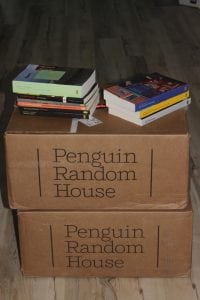 Early arrivals (Photo by A. Rooney)

Upon her return, she worked at the nonprofit Housing Works bookstore in Soho for nearly four years. “Everywhere I worked, I’ve learned something different,” she says.

The couple met through mutual friends at Housing Works, where each of them worked but not at the same time. On their first date, they discovered they both dreamed of opening their own bookstore.

They chose Cold Spring for their joint venture because, Heidi says, “after being in the bookstore business, you get a sense of the kind of stores which are complementary.” They liked the fact that the village has a thriving Main Street and is easily walkable, yet had no bookstore.

They hope their timing is right. “There was a time when cheapest and fastest was the motivator for everything,” says Heidi. “But it feels like there’s a growing sense that people want great spaces in their community and are willing to spend a few extra dollars” to support them. “We’ve had such a positive response.”

Even before it opens, Split Rock formed a partnership with the Sunset Reading Series, whose next event, a reading by Benjamin Taylor, author of The Hue and Cry at Our House, is scheduled for Sunday, June 24, at the Chapel Restoration. It will sell books at the readings and donate a portion of the proceeds to the series and the chapel.

5 thoughts on “Back to Basics”