The Empire State’s feud with the Trump Administration over federal tax law changes escalated last week after the IRS denounced state plans to mitigate the revisions’ effect on those who — like more than half of Putnam County taxpayers — itemize on their federal tax returns.

Promoted by President Donald Trump and passed by the Republican-controlled Congress in December, the new law caps, at $10,000, the amount taxpayers can deduct on their 1040s for paying state and local taxes.

Previously, no such ceiling existed. The changes take effect with 2019 tax returns. The average total of itemized deductions in New York state, $36,000, is the nation’s highest.

In response, New York State authorized an alternative: Instead of paying local taxes per se, taxpayers could donate the money to a charitable foundation established by a local government — including school districts and counties. In return, they would receive a credit for up to 95 percent of the donation, which they could claim as a charitable tax write-off on their federal return.

A local government would then transfer money from its charitable foundation to its general fund. Local governments or school districts who create foundations could limit how much of a taxpayer’s donation qualifies for a tax credit.

Other states are pursuing similar initiatives, but on May 23 the Internal Revenue Service dismissed the plans as “efforts to circumvent” federal law. 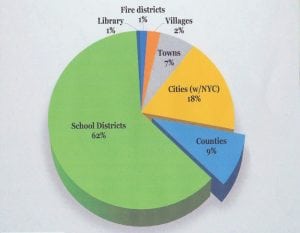 A New York State Association of Counties graph displays the breakdown of taxing in the state, by jurisdiction.

In a preliminary notice, the agency warned taxpayers that only the federal government can decide what constitutes a deductible charitable contribution. The IRS promised to soon release a comprehensive opinion.

Firing back the same day, New York Gov. Andrew Cuomo asserted that “the IRS should not be used as a political weapon” and pledged that state officials “will continue to fight against this economic missile with every fiber of our being.” A number of states are joining forces to challenge the tax law in court.

In a memo to municipalities this spring, Barbara Van Epps, deputy director of the New York Conference of Mayors, observed that the IRS definition of charitable activities includes “advancement of education or science; erection or maintenance of public buildings, monuments or works; lessening the burdens of government”; providing for “relief of the poor, the distressed or the underprivileged,” and “combating community deterioration.”

In a follow up with The Current on Friday (June 1), Van Epps explained that under the Internal Revenue Code, “municipalities are currently considered a qualified organization” for receiving charitable contributions, “assuming the municipality uses such contributions for a public purpose.”

The issue has drawn attention in Putnam County, as well. According to the IRS, more people itemize on their federal returns in Putnam than any other county in the state. About 51 percent of Putnam residents itemize, and 41 percent in Dutchess. The state average is 34 percent.

The three-member committee began to do that on May 14 but after a few minutes postponed deliberations.

“This is a really complex issue,” said Neal Sullivan, who chairs the committee. “The amount of work, on the county side, and the town side, required to put some of these ideas into place would be” significant. Nonetheless, he said, “if the IRS says we can do it, then we have to explore it.”

“We are advising districts that it would still be a good idea to proceed with caution,” said Julie Marlette, the association’s director of governmental relations. “We always anticipated that the IRS would weigh in on this. Ultimately, its interpretation will dictate whether a federal tax benefit materializes.”

Van Epps stated that NYCOM also is treading carefully in regard to municipal charitable foundations.

“At this point, we are not encouraging our members to do anything,” she said on June 1. “Rather we are simply trying to ensure that they know the option is available and to educate them on the process” by providing information on the steps required, “so that they can plan accordingly.”

NYCOM also is “strongly encouraging those that are planning to offer such an option to make sure their taxpayers understand that federal law governs” national income tax policy and that the IRS intends to propose new regulations on the programs like the one New York established, she said.

The New York State Association of Counties, of which Odell is president, noted that “downstate New York is disproportionately impacted by the significant curtailing of the deductibility of state and local taxes.” Its executive director, Stephen Acquario, in April called the new federal policy an unprecedented “intrusion into state and local taxation.”