Chester is player in an intriguing — and surprising — sport

That changed when she found an injured bird while jogging north of Cold Spring.

“When I saw it couldn’t fly, I decided to take it home,” the Philipstown resident said. She soon found herself being homeschooled in Pigeon Racing 101. 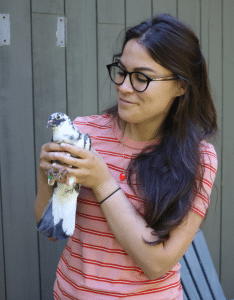 Amber Aponte-Kocela and the racing pigeon she rescued and named Chester (Photo by M. Turton)

After a few phone calls, she connected with Dan Morales, a Nelsonville resident who is a former “fancier,” or racing pigeon owner, who once had lofts in Garrison and Cold Spring.

Morales examined the bird, which was dehydrated, malnourished and underweight. He told Aponte-Kocela that her feathered friend was a 4-month-old, male racing pigeon. Based on a band attached to one of its legs, it originated in Kentucky. He prescribed a diet of millet, corn and other grains.

Aponte-Kocela said the pigeon, whom she named Chester, is doing well but is not ready to be released. “He may have some other health issues we have to take care of first.”

[Update: Chester was released on July 7.]

Morales said Chester’s pedigree is uncertain. “Within every strain of racing homers, you have different colorations; he may be a Speckled Jannsen or a Jan Aarden,” he said.

Pigeon racing evolved from the use of birds as messengers centuries ago. According to the Royal Pigeon Racing Association, based in the U.K., pigeons were used as early as 1200 B.C. to inform Egyptian officials of flooding along the Nile. Modern racing dates to mid-19th century Belgium, which still produces some of the world’s best breeds.

Morales refers to pigeon racing as the sport of kings for poor people. “Can’t afford a horse? You can afford a pigeon,” he said.

The sport’s popularity in the U.S. is dwindling. “Thirty years ago, there were pigeon lofts in many backyards in the Bronx, Long Island, New Jersey and even Manhattan,” Morales said. Still, there are at least 14,000 “one-loft” racing pigeons in the U.S., which refers to birds raised by numerous owners at a single facility.

The sport can be lucrative, if you have a good pigeon. Nineteen pigeon races in 2017 offered a total of $2.7 million in prize money. The Hoosier Classic in Indiana this year will be the first U.S. race to offer $1 million, including $250,000 to the winner. A race in South Africa pays 1 million euros to the winner.

With that kind of outlay, the fastest birds become valuable. “I had one pigeon in my loft whose grandfather was sold to someone in Japan for $40,000,” Morales said.

Racing, with a twist

In pigeon racing, all birds leave from the same starting point, but the finish line for each is its home loft. Each bird is timed electronically based on yards flown per minute. Some of the fastest birds top 80 mph.

Younger birds race between 100 to 400 miles while older pigeons race up 1,000 miles. Even at those distances, it can be a photo  finish. “One of my birds lost a 150-mile race by one second,” Morales recalled.

Smaller, club races usually include fewer than 10 birds. Large races can have thousands. Officials ensure that owners don’t stack the deck. “Pigeon droppings are tested to make sure that, like in horse racing, no stimulants are being used,” Morales said.

In training, a pigeon is taken along the route of a future race and released at incremental distances ranging from 5 to 100 miles. Morales said the birds’ ability to find their way home remains a mystery. In experiments, birds have managed to return even with their eyes covered.

During World War II, a member of the U.S. Army Pigeon Service named G.I. Joe saved the lives of residents of the Italian village of Calvi Vecchia.

The village was occupied by German troops, and the Allies had called in planes to bomb it. When British forces captured the village, G.I. Joe flew 20 miles in 20 minutes to deliver the critical message to stop the bombardment. 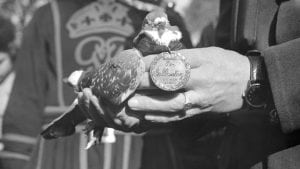 G.I. Joe with his medal

In 1946, at the Tower of London, G.I. Joe was presented with the Dickin Medal for Gallantry, making him the first non-British recipient of the medal honoring the service of animals during the war.

His tour of duty complete, he was transferred to the U.S. Army’s Churchill Loft at Fort Monmouth in New Jersey, along with 24 other avian veterans. G.I. Joe died in 1961 at the Detroit Zoo at age 18. His body was mounted and is displayed at Fort Monmouth.

When they make mistakes, the birds make adjustments. One of Morales’ birds overshot its home in each of its first three races, landing in another loft 150 miles away. “The owner kept calling me saying, ‘That bird keeps showing up here!’ ” he recalled. In the fourth race, the pigeon got it right, taking first place after flying 373 miles. “At some point they just get it, and once they get it, that’s it,” he said.

Pigeons face hazards, from severe storms and power lines to predation. People for the Ethical Treatment of Animals (PETA) has been critical of the sport for what it terms the “massive mortality rates” in some races.

Morales winces at the suggestion of cruelty. “The reason I trained my birds up to 100 miles out was to ensure they come home,” he said. In the Danbury and New City clubs he joined, owners treated their birds well, he said. “But there are always some guys who are not of the best character,” he conceded. “I did it for the love of seeing my birds come home.”

Aponte-Kocela is grateful for Morales’ help in nursing Chester back to health. “I’ve learned so much about pigeons and racing from Dan,” she said. “Nature keeps connecting me with good people.”

Morales doubts that Chester flew in from Kentucky, pointing out that the bird is too young to fly that far. “Owners sometimes send young [untrained] pigeons to other owners to see how they do under different conditions,” he said. Chester, he feels, was likely sent by an owner in Kentucky to a loft not far from Cold Spring.

“Maybe once he’s healthy and released, he’ll come back for a visit,” Aponte-Kocela said. “That would be really neat!”