The Beacon resident said it might have been about migrant children being kept in cages, the recording of children crying for their parents, the woman who had her infant taken away from her while breast-feeding, or just learning about the number of children separated from their parents after their families were caught crossing the border.

“We’ve hit a new level here in the wholesale abuse and demonizing of the most vulnerable people in our society,” says Aymar-Blair, who is co-founder of the nonprofit Article 20 Network, which aims to protect the right to peaceful assembly,

Elaine Ciaccio, another Beacon resident, agrees. “Once this becomes normal, what gets normalized next?” she says. “I’ve donated to organizations, but it’s beyond that now.” A few of the grannies from the Highlands who will be traveling to the border, along with grandfathers and support crew. (Photo by Cappy Hotchkiss)

Six weeks ago, Aymar-Blair, Ciaccio and about 20 other people met in a garage to talk about what seemed like an impossible idea: What if a busload of grandmothers drove from Beacon to the southern border of the U.S. to protest outside a detention center where migrant children were being held?

That once-theoretical busload of grannies, now known as Grannies Respond/Abuelas Responden, will leave Beacon next week for a six-day, 10-stop, 20-event, 2,000-mile road trip to McAllen, Texas. Thirty people — mostly grandmothers, with a few grandfathers and support crew along for the ride — will begin the journey in Beacon, with others  meeting them as they head south, including from Mexico City and Alaska.

The grannies will hold a kick-off party at Polhill Park on Saturday, July 28, from 3 to 5 p.m. “People are writing, saying ‘Thank you for giving us hope,’ ” says Aymar-Blair. “Just knowing that grandmothers are going to the border seems to mean something to a lot of people.”

When they reach McAllen, the women will be joined by Veteran Service Corps (VSC), an organization that famously showed up in droves to participate in the 2016 protests at the Standing Rock Indian Reservation against the Dakota Access Pipeline. Members of the Corps are already in McAllen to meet with interfaith leaders, activist groups and the police to ensure that the 24-hour protest and volunteer work at the border will go smoothly.

With more caravans across the country signing up each day, Aymar-Blair isn’t sure how many people will be joining them in Texas. He says he asked the VSC how it got so many protestors to Standing Rock and was told the Corps actually only put out the call for 100 veterans, and 8,000 showed up.

The Corps is putting out a similar call on behalf of the grandmothers. “We have to be prepared to be overwhelmed,” Aymar-Blair says. 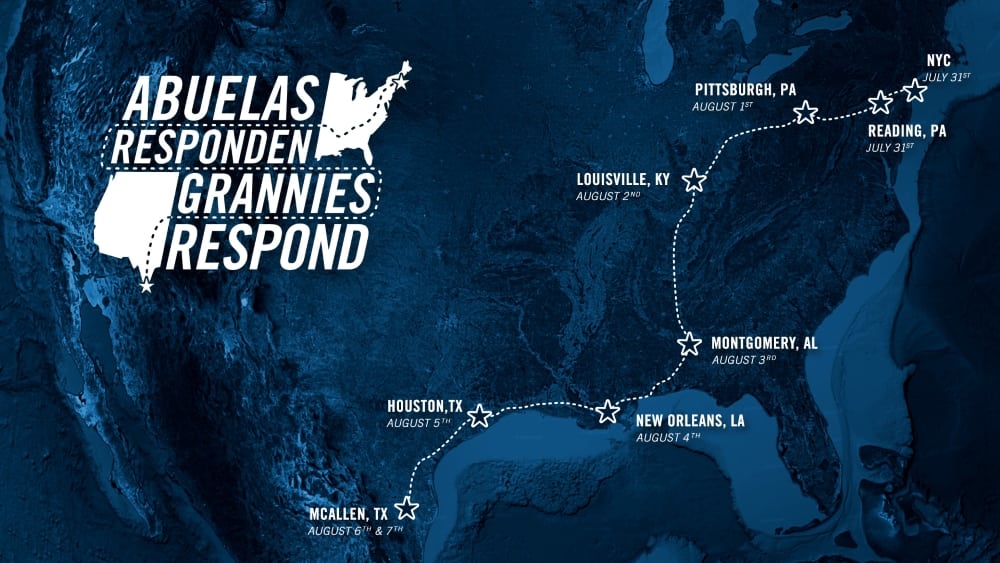 A map of the route the grannies plan to take, starting July 31 in New York City.

He says the inspiration for the caravan comes from the long history of journeys as a form of protest such as the Freedom Riders of 1961, Gandhi’s Salt March in 1930, and even the Book of Exodus.

“Who attends a protest tells the story,” he says. “Grandmothers are often seen as the moral compasses of their families. So, on a national level, what do our grandmothers think about all of this?”

Claire Nelson, a Beacon grandmother who plans to make the trip, remembers the stories her own grandmother told about fleeing Vienna during World War II to escape the Holocaust.

“That helped me respond and grow because of the fear of what’s going on now, it brings back memories of what’s happened in our history,” she says. “Our generation, we’re the baby boomers, we always spoke out. Why not continue?”

At each stop the group will protest outside immigration detention centers, meet with immigration activist groups, do volunteer work, or some combination.

“We don’t want to just drive in, be disruptive and then leave,” says Aymar-Blair. “That’s not helpful to the people on the ground.”

In New Orleans, a Methodist church will lead the grannies in a second-line parade based on the city’s jazz funerals. In this case, Aymar-Blair says, the mourners will be symbolically burying hatred toward refugees.

No one in Beacon can quite say how the planning for that parade came about. Every day brings new caravans signing up at granniesrespond.org, events being planned by other groups, and more attention. “I don’t know how any of this is happening anymore,” says Aymar-Blair, with a smile.

What’s also changing every day is the situation at the border, as the federal government rushes to meet a court-mandated deadline to reunite migrant children separated from their parents. It’s possible, by the time the grannies reach McAllen, that the families will have all been reunited, and the government will no longer be allowed to hold families indefinitely. Even if that’s the case, Aymar-Blair says, there will be work to be done.

“We still have an inhumane policy toward the treatment of refugees and asylum seekers being turned away at the border, and the conditions people are being kept in are awful,” said Aymar-Blair. “That’s not going to change by Aug. 6.”

10 thoughts on “Grannies Head to Border”