The inside scoop on the foundation of farming

To understand our soils, you have to imagine ice in every direction.

Fifteen thousand years ago, the Hudson Valley was covered by a sheet of solid ice filled with boulders and sediment. The land below it was scraped to the bedrock. As the glacier melted, the water carried the sediment away. When the water flowed faster, the boulders moved with it.

That movement created one of the most complex geological regions in the world, with deposits of shale, slate, schist and limestone.

“We have wide soil diversity,” explains Dave Llewellyn, director of farm stewardship at Glynwood, a nonprofit based in Philipstown whose mission is to ensure the Hudson Valley is a place where farming thrives. “The rich range of soil types across 12 counties contributes to the diversity in crops and livestock, which is also an enormous agricultural benefit, one which many regions don’t have.” 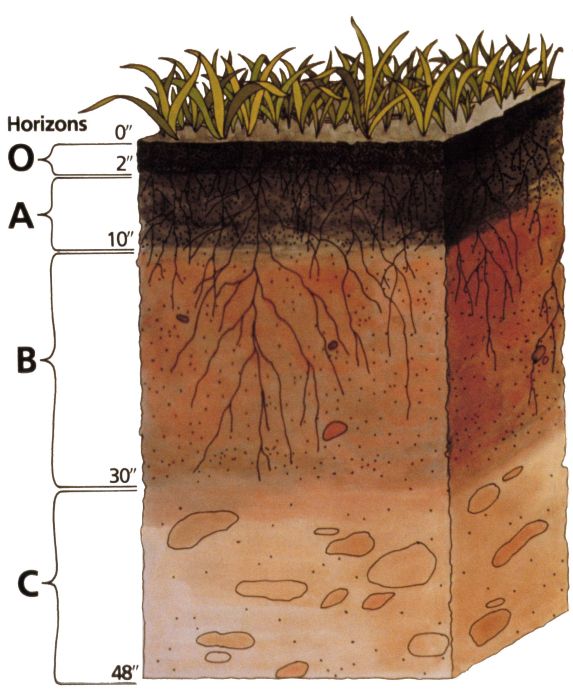 The goal is to make soil more resilient. “Adding organic matter makes it able to store more water, hold together and drain better,” Llewellyn says. “It also supports the microbiology in the soil, which supports our plants.”

Jeff Walker, a geologist who teaches at Vassar College and has written extensively on the soils of Dutchess County, explains that you can tell if soil is good for farming by the topography. Valley lowlands that were created by glacial streams have sandy, silty and loamy (mixed clay, silt and sand) soils. Crops grow well in these soils. Hills and slopes are covered by ablation till, the larger pieces that were left as the glacier melted. These soils are better for grazing and pastures.

The basic character of soil can’t be altered. You can add lime to make it less acidic, but it will always revert to its original composition. Adding organic matter like compost or using cover crops to add nutrients helps the soil retain nutrients and water and improve soil condition, but it doesn’t create soil.

Scientists study soil in layers called horizons. The top 2 inches or so is the “O” horizon, referring to organic matter. Here you find roots and decomposing leaves. The next 10 inches or so is the “A” horizon with nutrients such as nitrate, phosphorus and potassium that plants take up through their roots.

The “B” horizon, which goes down to about 30 inches, has minerals such as iron that leach down and aren’t used by plants. The “C” horizon, the next 4 feet, is the original sediment or rock layer that created the soil. Below that is bedrock.

Scientists map land with soil surveys that relate to the best uses for an area. There are 12 soil orders. Each is named to describe the soil’s texture and the first part is always local. For example, Walker explains, Hoosic-Wayland-Copake soil was formed by glacial outwash. Hoosic soils are only found in New York, Massachusetts, New Jersey and New Hampshire. 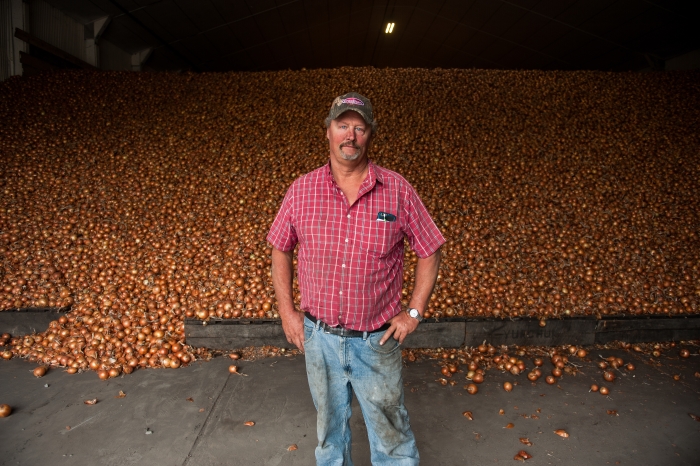 Rick Minkus is an onion farmer in New Hampton, Orange County. The high sulfur content of the dirt there makes them among the most pungent on the market. (Photo by Damon Jacoby)

Soils in the Hudson Valley were formed 12,000 years ago and it takes 500 years to create 1 inch of topsoil. Walker describes the process: “Whenever it rains, water percolates slowly into the soil and atom by atom it’s moving around.”

We’re losing soil much faster than it’s formed. A 2006 study by Cornell researchers found that erosion rates in the U.S. are 10 times faster than replenishment rates. In some places around the world, the rate is 30 to 40 times faster.

“Erosion is a slow and insidious process,” David Pimentel, a professor of ecology at Cornell, said at the time of the 2006 study. “Yet the problem is being ignored because, who gets excited by dirt? It is one of those problems that nickels and dimes you to death: One rainstorm can wash away 1 millimeter of dirt.” That doesn’t sound like a lot, but on a 2.5-acre farm, it amounts to 13 tons of topsoil.

In the Hudson Valley, where climate change has brought heavier downpours, soil loss is a real concern. In the heavy rains our region has recently experienced, inches of topsoil can be lost in a season which could take hundreds of years to replenish.

For farmers, one method to prevent erosion is keeping fields planted year-round and minimizing digging and other disturbances to the soil. This has the added benefit of keeping carbon from being released into the atmosphere, which contributes to global warming.