In a May 19 “town hall” forum at the Memorial Building in Beacon, the four-term Democrat, whose Congressional district includes the Highlands, also urged voters to read the report by special counsel Robert Mueller on Russian interference in the 2016 election and outlined ways, including impeachment, that Democrats can confront President Donald Trump.

Speaking as a resident of the mid-Hudson Valley, Maloney (who lives in Philipstown) urged state and other officials to “give me the airport, give me the bridges, give me the primary assets that are now managed, or mismanaged, or are just down the priorities list of things like the MTA or the Port Authority because nobody has got time to focus on our stuff; they’re focused on New York City. I’d rather have the controls, have the bonding authority, locally, so those assets are prioritized and so there’s a regional transportation plan.” 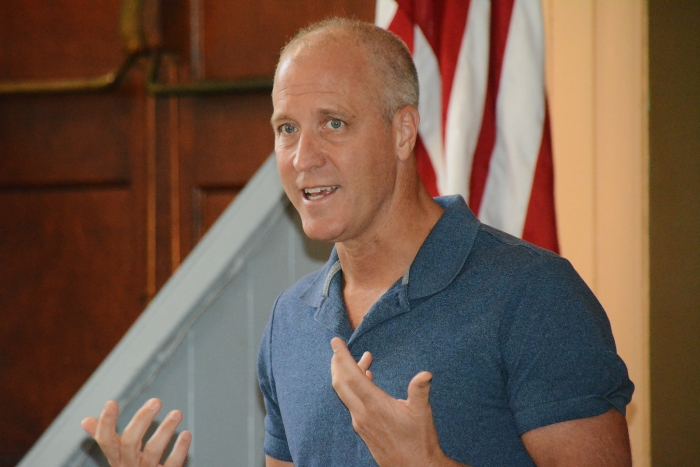 Rep. Sean Patrick Maloney speaks at a “town hall” forum in Beacon on May 19. (Photo by L.S. Armstrong)

That plan, he suggested, should include ongoing east-west transit between Beacon and Newburgh. “Let people get to work easier from Newburgh,” which he said is “is dying for some of the economic activity that’s going on here” on the east side of the river. If Newburgh-area residents “can get to that [Metro-North] express train to go to New York City, it would transform Newburgh.” In addition, a new transportation network could “get you to Stewart Airport so that the combination of commuting and airport traffic and economic activity and tourism across the river all can justify this capital expenditure,” he said.

He noted that the effort would require federal funding and policies “that reward regional transportation plans,” along with resources for other area needs, such as “the nuts and bolts, the bridges, sewers, roads.”

Neal Zuckerman, a Garrison resident who represents Putnam County on the MTA governing board, said the results of Maloney’s idea could vary, depending on how it is implemented.

If the HVTA contracted with Metro-North, residents would lose their presence on the MTA board, where their clout is already diminished, he said (Zuckerman and the Dutchess, Rockland and Orange representatives share a single board vote.)

“Unless the MTA spins off Metro-North, we would have taxation without representation,” he said. “That is what Connecticut has,” because the state pays the MTA for service but has no board representation.

Establishing an independent HVTA “is a bigger question,” he added. “It has, like so many things in life, pros and cons.”

Neither Port Authority or MTA executives responded to requests for comment on Maloney’s idea.

Maloney also discussed the battles by Democrats in Congress with Trump.

“Every American should read the Mueller report,” he said. “It’s a depressing and thorough litany of unethical, improper and unpatriotic conduct by the president and his campaign. We’re going to have an election [next year] and this ought to be a big issue.”

Maloney is on the House Intelligence Committee, one of the panels probing foreign interference in the 2016 election, Trump’s finances and allegations against him. The administration has refused to cooperate, forcing the House to issue subpoenas.

“It’s not OK” to flout Congress and “we need to enforce those subpoenas” in court, Maloney said, predicting victory. (This week federal judges in New York City and Washington ruled in favor of House committee requests for financial data Trump sought to keep secret.) He added that the House must continue its “aggressive oversight” and noted that while it could impeach the president, the Republican-controlled Senate would still have to remove him.

Maloney listed three routes forward for those who oppose the president: impeachment and removal; a demonstration of criminal liability; or voting him out of office in 2020 — the latter being “the biggest and best opportunity,” he said, although “we have to be working on all three. We will win, but I can’t make it happen as fast as you might want.”