Turkey a favorite with neighbors, passersby

Hamlet, Nelsonville’s celebrity turkey, seems headed for a much better fate than the character for whom he is named.

Slated to be the centerpiece of a Thanksgiving meal, the 2-year-old red bourbon is instead the pride and joy of a Nelsonville couple, Suzy Kee and Dave Mattson. 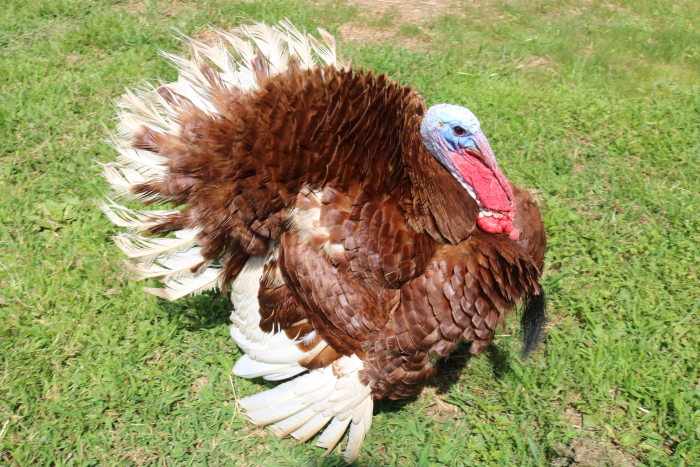 The king of Nelsonville (Photo by M. Turton)

The gobbler can be seen, almost daily, happily strolling along the shoulder of Main Street on the upper east side of the village.

A few years ago, Kee and Mattson purchased two red bourbons — a tom, or male, they named Tom, and a hen they called Henrietta. The pair produced two poults, Hamlet and an unnamed hen. Unfortunately, Hamlet’s parents and sister were lost to coyotes. 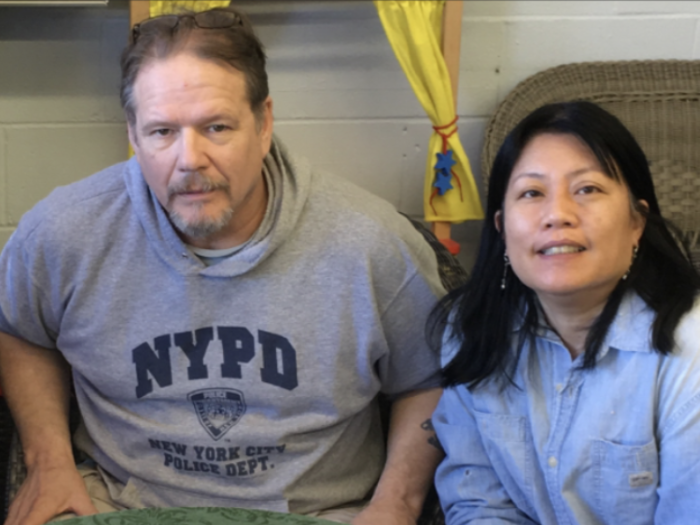 Kee says that, after seeing Hamlet, neighbors and passersby began stopping in to ask about him and the couple granted him a pardon from ending up as dinner. “We just couldn’t do it,” Kee said.

“He’s been roaming for about a year now,” she said. “We’ve spoken to our neighbors and they think he’s cool,” although he occasionally leaves a deposit on their porches.

She has asked neighbors not to feed Hamlet to ensure he sees their home as his sole source of food and water. His diet includes fruit such as grapes and cherries, vegetables and poultry feed. He also a taste for black soldier fly larvae and other bugs that he grubs in the yard.

This turkey is not lacking in personality.

Kee describes Hamlet as a peeping tom. “If he goes up onto your porch and the screen door is closed, he’ll stand there, peering in at you and your pets,” she said. “He’s a people turkey, he likes following people; he’s a social satellite” who mimics people when they laugh. 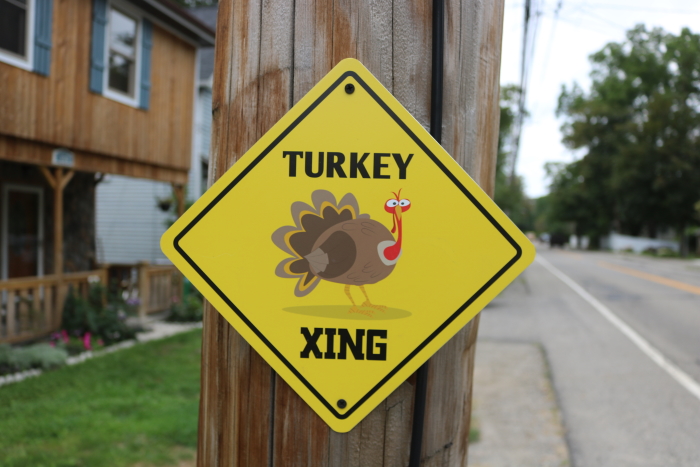 Hamlet has his moods. Kee explained that when the skin on his featherless head turns red, it signals anger. When it’s blue, he’s annoyed. When it’s white, he’s outraged.

Mattson said Hamlet sometimes resents being locked in his enclosure at night and clearly displays anger when he is released in the morning. “If you penned him up all day, he’d be miserable,” he said.

Like many pets, Hamlet knows his own name and comes when called. 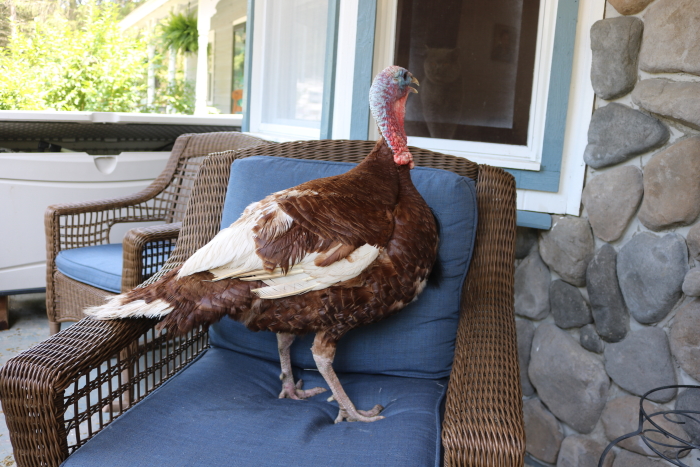 Hamlet the turkey takes a gander. (Photo by M. Turton)

Dropping in on the neighbors is part of Hamlet’s daily routine. He also often follows pedestrians who happen by on Main Street. On his own, he will wander several hundred yards, including down to the ice cream shop and bakery.

Each night, he sleeps in the same spot inside his enclosure next to the backyard chicken coop. The enclosure, Mattson said, prevents any nocturnal wanderings.

Mattson, who is retired, spends most of his days at home with Hamlet. “He follows me around all day,” he said, whether he’s working in the garden or sitting on the front porch.

Mattson and Kee are not overly concerned about traffic hazards. “We have two Turkey Crossing signs,” Kee noted, adding that people stop up to five times a day to have a closer look at their pet. Often, she said, cars will slow, with the occupants shouting a greeting as the turkey waddles down the road. “We just wish people wouldn’t drive 40 miles an hour.” 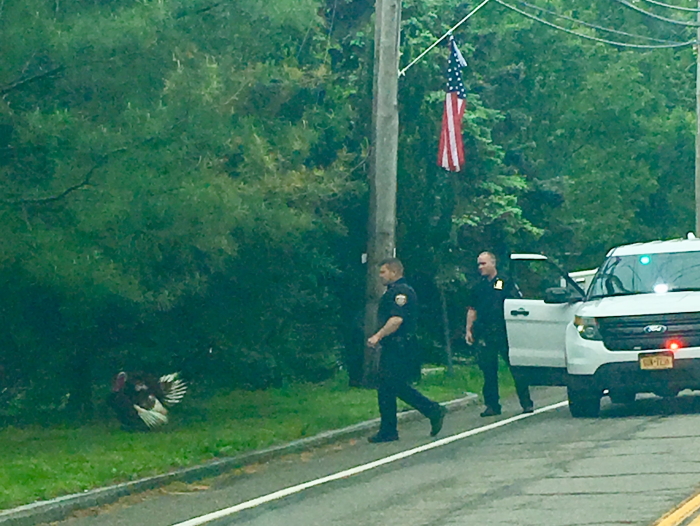 Two officers who appear to be from the MTA shoo Hamlet away from the road in Nelsonville in May. (Photo by Lara Voloto)

Mattson said Hamlet never darts onto the road. “He’s a slow walker.” He laughed recalling a resident who expressed concern about a photo posted on Facebook of Hamlet standing in the middle of the road.

“What they failed to see,” Mattson said, “was he had just helped an elderly woman across the road and was on his way home.”

The state Department of Environmental Conservation has issued a call for citizen scientists to help count wild turkeys.

The DEC has conducted the count since 1996 to track populations and estimate the number of poults. It noted that weather, predation and habitat conditions during breeding and rearing seasons can significantly impact nest success, hen survival and poult survival. The index allows the DEC to gauge reproductive success and predict the harvest numbers for turkey hunting season in the fall.

During the month of August, survey participants are asked to record the sex and age composition of flocks they see. Visit dec.ny.gov for more information.

Hamlet is fortunate to have ended up as a pet. Kee said red bourbons are considered “the epicurean epitome” of flavorful turkey. “Dressed, he would go for about $12 a pound,” she said. Red bourbon toms can weigh up to 33 pounds, and hens 18 pounds.

Hamlet’s fame may soon be even greater. Kee and Mattson have entered him in the poultry competition (red bourbon division) at the 174th annual Dutchess County Fair, which begins Aug. 20 in Rhinebeck.

One thought on “Nelsonville Gobblesmacked by Pet”