Also, Garden Street to be repaved

The Cold Spring Village Board has approved the request from the Magazzino Italian Art Foundation to organize a parade on Main Street on Saturday, Nov. 16.

Magazzino Director Vittorio Calabrese told trustees during their Sept. 10 meeting that the rain-or-shine event, which is being choreographed by Italian artist Marinella Senatore, will involve as many as 100 people, from opera singers and percussionists to string quartets and high school musicians, who will stop for brief performances along the route. 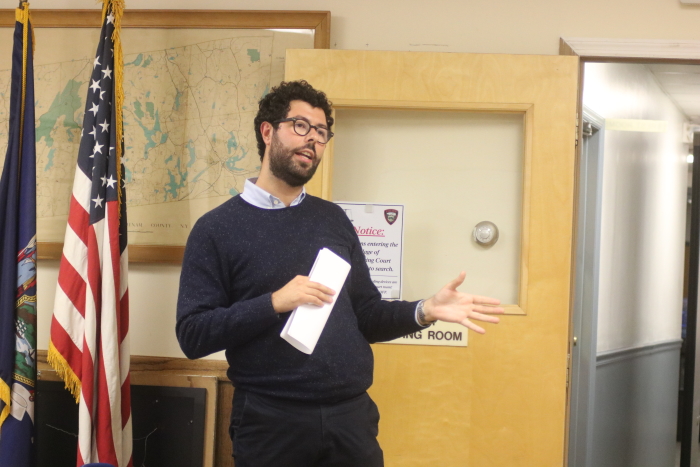 Magazzino Director Vittorio Calabrese spoke to the Village Board on Sept. 10. (Photo by M. Turton)

“I can make it work,” Burke said. “There may be only a minute or two of inconvenience.”

Calabrese said performances requiring the parade to pause can take place between intersections, minimizing conflicts with traffic exiting from side streets.

Much of the activity will take place at the bandstand after the parade, which is expected to take about 45 minutes.

Residents will have an opportunity to comment on proposed changes to some 30 chapters of the Village Code when the Code Update Committee holds its fifth public hearing on Oct. 2 at the firehouse. Written comments can be submitted for up to 30 days after the meeting. The proposed updates will be available on the village website the week of Sept. 15. The board is expected to approve the revised code by year-end.

Garden Street will be repaved in early October. The board awarded the $135,934 contract to Van Etten Paving, the only firm to submit a bid. The Cornwall-based company reduced its submission by $16,000 when asked to cut costs by the village engineer, and Merandy said further savings of up to $14,000 may be possible. The project is expected to take four days. Merandy said steps will be taken to ensure anyone living on the street who needs to leave during the day will be able to do so.

Philipstown will pay the cost of paving the grassy area along the shoulder of The Boulevard. The town will use the area for parking when it moves part of its office operations to the Old VFW Hall on Kemble Avenue during renovations to the Town Hall. Merandy said paving and bumper stops will make the area better suited for diagonal parking during the winter.

Cold Spring police officers responded to 80 calls for service in August, Burke said. He reported that 43 traffic tickets were issued, including 16 for speeding, some of which were a result of increased enforcement during the morning commute. Officers wrote 148 parking tickets, bringing the 2019 total to 972. They made arrests on charges of criminal mischief and unlicensed operation of a vehicle. He said a third arrest, for unauthorized use of a vehicle, occurred after a young woman allegedly took and kept her father’s car for three months, despite his requests to return it.

Village Accountant Michelle Ascolillo reported that 97 percent of village property taxes have been received, adding that Putnam County reimburses the village for delinquent taxes and will assume responsibility for collections.