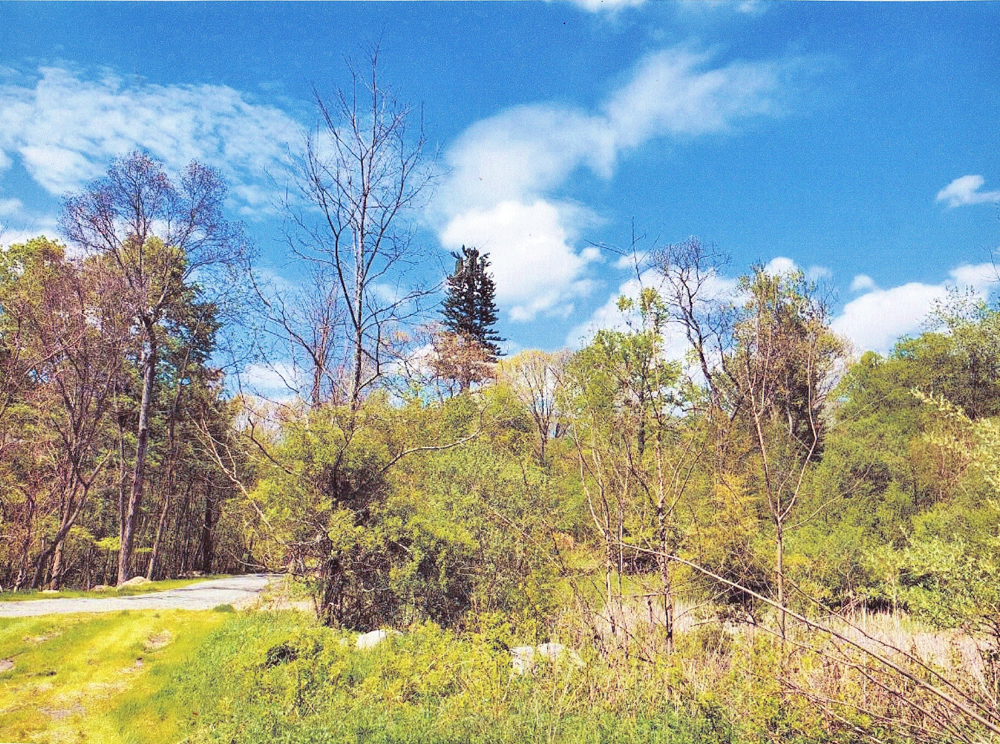 Homeland Towers says the Rockledge Road tower, disguised as a fir tree, will resemble the one, shown here at center, installed on Vineyard Road in Philipstown. (Photo by Homeland Towers)

Nelsonville on Monday (June 15) issued a permit for construction of a cell tower on Rockledge Road after village officials determined the disguised structure will look sufficiently tree-like and the fire department waived a ban on using a steep access road.

The Village Board, joined by William Bujarski, the building inspector, discussed the status of the tower project during a meeting held by teleconference.

Designed to resemble a fir tree, the 95-foot “monopine” will stand on a stony parcel off Rockledge and Moffatt roads, above the Cold Spring Cemetery. It will be about 1.3 miles from the 120-foot tower that Homeland and its partner Verizon recently installed on a hillside on Vineyard Road, in Philipstown.

Homeland Towers separately sued Philipstown and the Village of Nelsonville in 2018 in federal court over their respective rejections of the two tower projects. Both cases were settled without a trial.

According to an email that Vince Xavier, the Homeland Towers project manager, sent village officials on June 12, the Rockledge structure will resemble the one on Vineyard Road.

“All cell towers are ugly, but that one [on Vineyard] seems to be a better version than some of the other ones out there,” said Mayor Mike Bowman.

The access road to the tower side, which has a grade of 14.9 percent, has been rerouted since the initial plans were drafted to avoid a rocky outcropping, said Bujarski.

In a letter received by the village on June 12, Thomas Merrigan, chief of the Cold Spring Fire Co., said he could exempt the access road from gradient requirements because the risk of an emergency is lower for a cell tower than for residences and commercial businesses.

He said cell tower fires are typically caused by vandalism or error (such as a welding accident) and involve brush fires; that the fire department has small vehicles designed for use in such blazes; and that the access road has enough room for the department’s largest truck to turn around.

Merrigan said the CSFC sign-off on the road was a technical assessment, not a reflection of “political” considerations. The fire company, he wrote, expressed its “extreme displeasure with any party [such as opponents to the cell tower] that may choose to use us or view us as a pawn.”

Bujarski observed in the meeting that the federal court which oversaw the litigation settlement agreed that the access road could be relocated.

He also said that the permit, which Homeland Towers picked up at the Nelsonville Village Hall on Thursday (June 18), comes with stipulations. The firm must comply with state Department of Environmental Conservation requirements, which ban construction in the area from April 1 to Nov. 1 to protect a threatened bat species.

Also, Bujarski said, Homeland Towers needs to notify the building inspector before it begins removing trees. “I want to see that they comply with the plans as submitted,” he said.

Eisenbach also criticized the access road plans. “This is going to be a very dangerous road,” with switchbacks as well as a significant grade, he said. He reminded Village Board members that “all your names will be on this approval going forward.”

Bowman responded that the board has always known it must live with its decisions and that “everything has been done aboveboard.”

Richard Villella, a Rockledge resident, said on Tuesday that the latest tweaking of the access road design does not change Homeland Tower’s intention to have it start at a right-of-way on his property. He objects to that use of his land.