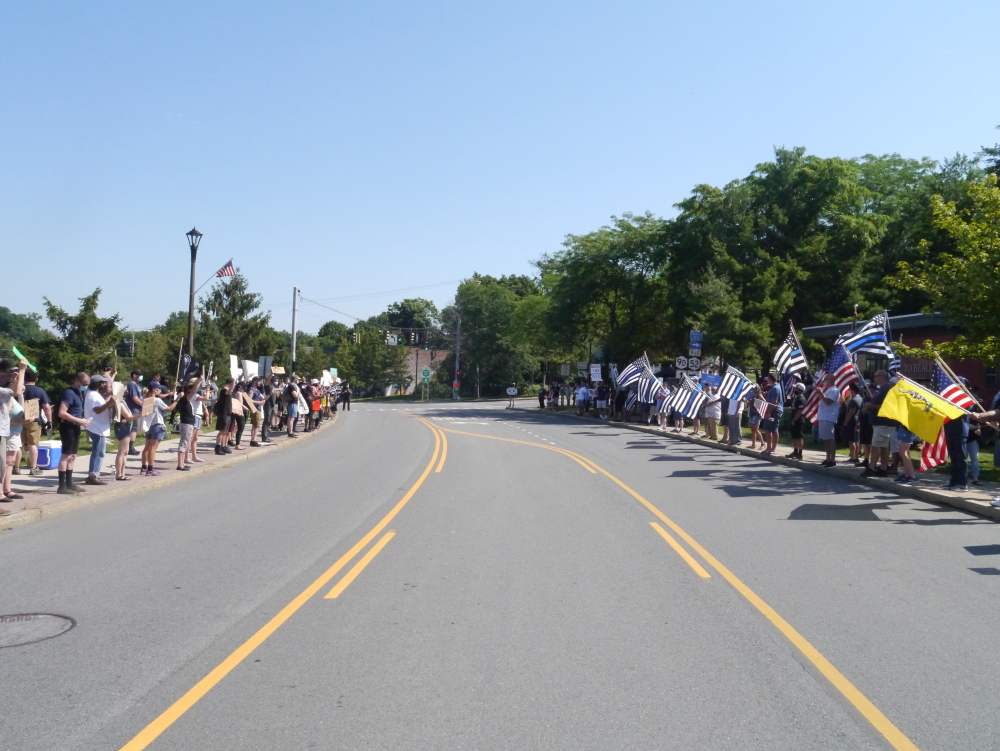 Dueling protests took place on Sunday (July 19) in Beacon, with one group waving Blue Lives Matter and U.S. flags and signs on the Bank Square side of Route 9D and Black Lives Matter supporters across the street, near City Hall.

There were a few tense moments, with some participants seemingly itching for a fight. Beacon police officers walked the street, which had not been closed to traffic, to contain any dust-ups.

That’s not to say the situation was peaceful.

In front of City Hall, Stefon Seward, a 2017 Beacon High School graduate, screamed into a megaphone: “No justice, no peace! No racist police!”

I had a long day of yard work ahead of me when a reader texted that morning that something was going down near City Hall, so I grabbed my camera and jumped on my bike. By 9:30 a.m. it was already brutally hot, which surely didn’t help ease the tensions.

The hostility from both sides was startling. Some police supporters called the Black Lives Matter people “communists” (which seems archaic) while the Black Lives side chanted “Fuck the police,” which may sound tough but has never been the start of a productive conversation.

Former Beacon Mayor Randy Casale stood with the Blue Lives Matter crowd, holding a sign declaring that City Council Member Dan Aymar-Blair “must go,” presumably because of Aymar-Blair’s public comments about reforming the Police Department. (I called Casale for an explanation but didn’t get a response.) 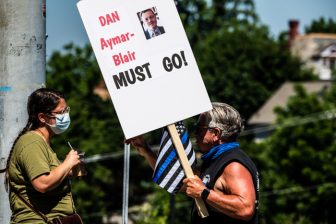 The Blue Lives side shouted that veterans back the police, while a woman on the other sidewalk yelled that she had served 20 years in the Air Force and couldn’t accept the U.S. flag being waved as a symbol of hate.

Standing in the middle of 9D, taking photos and listening, I wondered: Will people ever be able to step off these curbs without clenched fists?

For an article last year in The Atlantic, Charles Duhigg spoke with Marshall Ganz, who spent 16 years organizing produce workers in California alongside Cesar Chavez.

Ganz noted that stoking emotions against injustice is easy but, as Duhigg summarized, “for anger to be productive, at some point, it must stop. Victory often demands compromise.” Ganz told him: “You have to know how to arouse passions to fuel the fight, and then how to cool everyone down so they’ll accept the deal on the table.”

I can’t claim, as a white person, that I’ll ever understand what people of color have endured in this country, but it seems impossible not to recognize the anger and frustration our neighbors feel after a lifetime of slights and centuries of abhorrent treatment.

Conversely, most police officers are not racists or rogue and must feel unfairly criticized and taken for granted. The city’s police respond to hundreds of calls each month and, like law enforcement everywhere, can never be sure what to expect when they arrive.

I hated to see this confrontation in Beacon, namely because of how often I’ve heard folks say that we are a resilient and supportive people here.

That was never more evident than this spring, when the coronavirus brought all of our lives to a screeching halt, but Beacon residents banded together immediately to deliver food and medical supplies to vulnerable people who couldn’t leave their homes.

What about the fundraisers — created by schoolkids — that distributed more than $20,000 to small businesses in the region, or the volunteers who risked their safety to put free groceries in our trunks when many of us were stuck inside?

That was three months ago.

16 thoughts on “Reporter’s Notebook: Are We That Far Apart?”