One hundred and 50 years ago this month, on Aug. 11, 1870, Frederick Douglass visited the Mid-Hudson Valley while on a speaking tour to celebrate the ratification of the Fifteenth Amendment, which banned laws that prevented any man from voting based on his “race, color or previous condition of servitude.”

On Tuesday (Aug. 11), in Newburgh, Oliver King portrayed Douglass during the unveiling of a mural by Vernon Byron that honors the former slave and abolitionist. Douglass, then age 52, spoke in the city on Aug. 11, 1870, at its Opera House, which stood on what is now the site of the Newburgh Free Library and Board of Education complex on Grand Street. 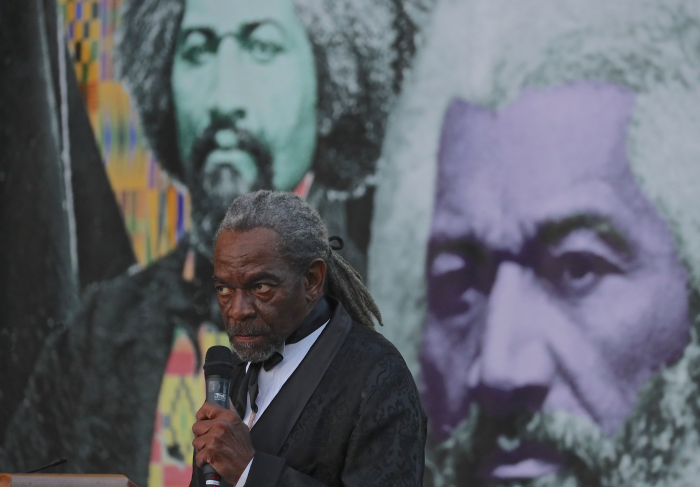 Much had happened in the previous five years. After the end of the Civil War in 1865, the Thirteenth Amendment was ratified to end slavery, and in 1868 the Fourteenth Amendment granted citizenship to anyone born or naturalized in the U.S., including former slaves. 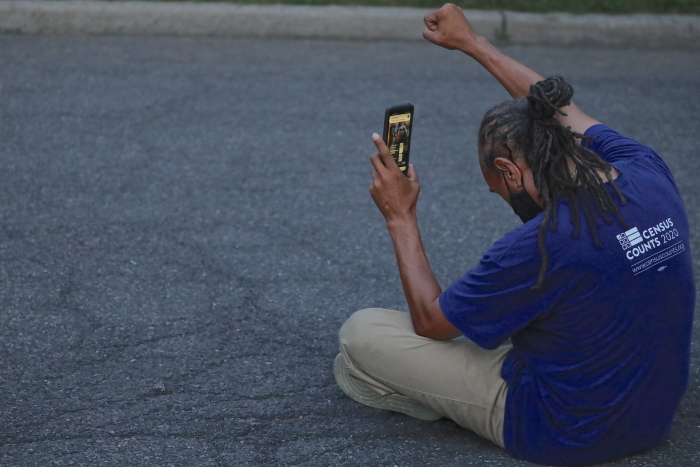 A spectator reacts to Douglass’ words (Photo by Ross Corsair)

During his visit to Newburgh, Douglass, who was an African Methodist Episcopal (AME) minister, visited the AME Zion Church and took part in a march on Washington Street. For more info, see bit.ly/douglass-newburgh.

Below is an account of the Opera House rally from the Newburgh Daily Journal, Aug. 12, 1870, in which the reporter summarizes the speakers’ remarks. Its language is preserved from the original.

The winding up of the Fifteenth Amendment celebration, at the Opera House last evening, was not very largely attended. [Editor’s Note: By one account, there were 4,000 people present.] The hall had been decorated for the occasion with the national colors, etc. On the stage were seated the young ladies who had represented the 29 states ratifying the amendment, a colored choir, members of the committee, orators and clergy.

First on the program came a grand overture by the Newburgh City Band. Their playing on this occasion would have done credit to any band. Then the choir sang a piece entitled, “Now the Glorious Day Has Come.” Prayer was then offered by the Rev. William F. Butler. [Editor’s Note: Butler, who lived in New York City, was the president of the Negro Republican Party.] After another musical selection, Frederick Douglass was introduced to the audience and received with enthusiastic applause. 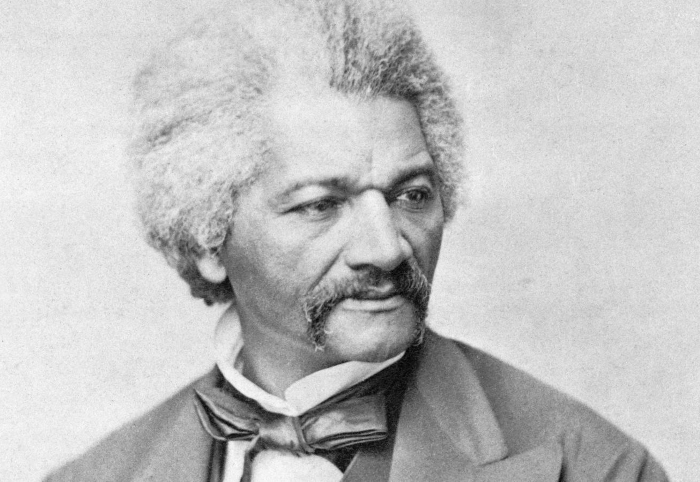 He said that he had often appeared before the American people as a fugitive slave, and until very recently as the advocate of slaves. But thanks to the “logic of events” and the magnanimity of the American people he was permitted to appear on this occasion with his brethren in the more dignified character of an American citizen. [Applause]

To be a citizen of the United States at the present time was one of the greatest privileges of which a human being could boast. This truth became more conspicuous as we looked at the tempest-tossed condition of Europe at the present time. A few crowned heads, looming above the dark sea of people, were able by their diplomacy and by their ambition to dash together as potter’s vessels. In this country, the government could not use the nation as an unthinking instrument.

The present did not seem an occasion for mere words. The event spoke for itself louder and more effectively any eloquence could do. Those who had celebrated the day had had music and the roar of artillery, they had processions and banners, they had waved the Stars and Stripes — the flag now happily cleansed from the foul blot of oppression and sacred to freedom and right.

The colored people now had equality at the three boxes — the jury box, the ballot box and the cartridge box. The lesson of the hour was to get the knowledge box. They were all surprised at the turn events had taken. Ten years ago they did not expect to see this day. Even here in Newburgh the procession today has been greeted and welcomed by all classes in the community.

The Fifteenth Amendment meant that hereafter the colored man was to be thrown up on his own resources. It meant fair play, and if he could live by that, he could live, if he could not, he must die. It meant that colored people could no longer charge their ignorance, their shortcomings to the white man and the unequal laws under which they lived. This was a moment for serious thought as to what should be their attitude 50 years hence in this country.

If they failed to make use of the opportunities now afforded them of educating their minds, accumulating wealth and taking their full share in the development of this country, it would be a terrible failure. The races that are now coming here were energetic and powerful and they would soon elbow the blacks out of existence unless the latter put forth all their powers in the strife. But the speaker had no fears for the future. A race like theirs was not to be trodden out.

The speaker gave at some length his reasons for believing that the colored people would not become extinct in this country, as has been predicted by their enemies. If it could have been possible to crush out the black race, that consummation would certainly have been brought about during the past two or three centuries, when they had been so oppressed and persecuted on this continent. He denounced this nation’s unjust treatment of the Indian races, which were so fast melting away before the white race.

Much had been done for the colored man but much remained to be done, in the way of obliterating the unnatural prejudice which characterized this nation. This prejudice was quite unknown in Europe, where a colored man could travel in public conveyances, go to theatres and mingle in the highest society, without encountering it.

The colored people in this country were sometimes charged with not being grateful enough for the liberty and privileges accorded to them. But on the other hand it could be said that the colored people had fairly won their rights. Besides, the American people had not of their own choice, and from a sense of right and justice, freed the colored man. It was done because the necessities of the nation demanded it. 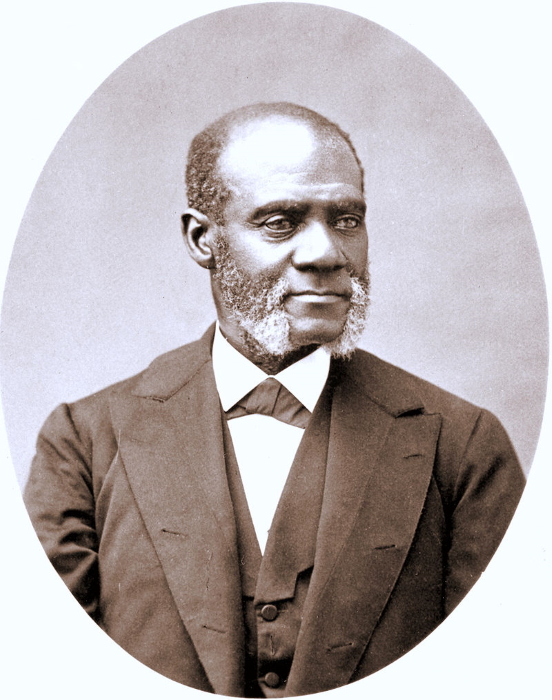 The next speaker was Rev. Henry Highland Garnett. [Editor’s Note: Born into slavery into Maryland, Garnett escaped with his family as a child and grew up in New York City. On Feb. 12, 1865, he delivered a sermon in the U.S. House and was said to be the first Black man to speak in the Capitol.] He referred to the generous treatment extended to the procession of yesterday in all parts of the city. He could hardly tell when he was in a Republican or Democratic part of the city; all seemed to welcome the colored people alike.

The reasons why the black people had not perished in this country were, first, because they are an imitative race. He who was the most imitative man was the most progressive man. Our civilization, the highest in the world, was nothing else than a series of imitations of other peoples and other ages. The colored people were imitating the whites and were fast coming up with them.

Second, the black man believes in the Christian religion. He loves his Bible, and he knows its principles. A people who worship the true God can never die out. The Indian in the midst of Christian civilization has clung to his heathenism and he is dying out. Instead of the colored people’s being washed out, said the speaker, they would wash other people out. [Laughter] There were nowadays very few clear-black men. [A voice: That’s so.] The colored people are doing all they could to increase their own race, and they had a good many to help them. [Laughter]

The speaker enlarged upon the subject of the colored man’s politics. He did not mean to say that every colored man should try to be an alderman, a policeman, a judge or member of state or national legislature, for he believed that the man who took up politics as a trade was an unfortunate man, and if he was not careful he was a doomed man and a lost and ruined man. Ten chances to one, if he did not learn to cheat on a large scale, he would live and die a poor man.

The speaker would rather be a good doctor, or engineer, or farmer owning a good farm, with a nice little wife and plenty of children around him, than a Senator of the United States. The colored men would be unworthy of their political rights if they did not use them.

It might be said that some of the black men would vote the Democratic ticket. Here is one black man, said the speaker, who will never vote the Democratic ticket as long as the grass grows and the water runs. [Applause and laughter] You Democrats, he continued, take no part in this jollification, and I am sorry for you. You might have taken a part in it, but you were against us.

I am not talking about the war Democrats, but about those copperhead Democrats who would not go to war themselves, and who did their best to discourage others from going to the defense of the nation against rebels, who made sport of the colored soldiers, who rejoiced at the rebel victories and mourned when the Union arms were triumphant.

There may be some black men who will vote the Democratic ticket. Why not? Do you expect all black men to be wise men? There must be some black fools as well as white fools. [Great laughter] If we never did a foolish thing we should be a great deal better than our white brethren, and we can hardly expect that.

The speaker went on to show what Democracy had done to oppress the colored people. He exhorted the latter to go to work and make money; to live soberly, honestly and righteously; and by their good conduct, to break down the prejudice against which they had to contend. He advised the young men to strike out into the new country of the great West and take the benefit of the Homestead Act. His remarks were spiced with wit and humor, and were listened to with the closest attention.

He was followed with a few remarks by Rev. Mr. Butler, after which the exercises were brought to a close.