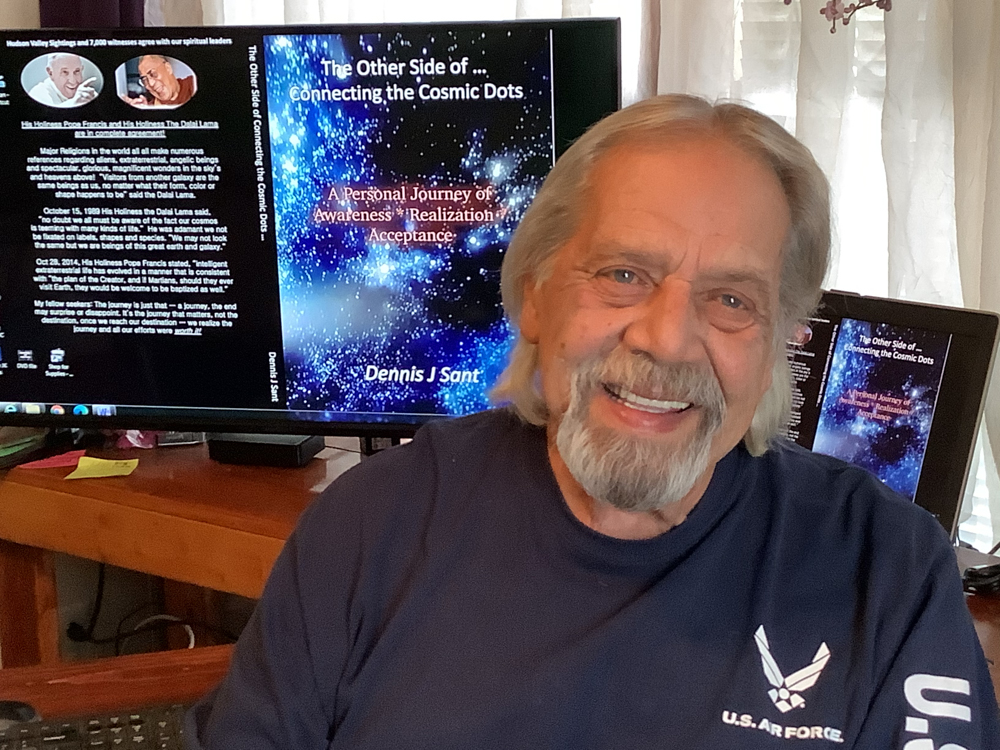 Dennis Sant, who was the Putnam County clerk until his retirement in 2014, is the author of The Other Side of … Connecting the Cosmic Dots: A Personal Journey of Awareness, Realization and Acceptance, which draws on his accounts of encountering UFOs and aliens.

What is the most compelling evidence that aliens have visited us?

The universe is teeming with life — different life. The evidence is overwhelming that very intelligent beings have visited this planet for thousands of years. At age 9, I had a visitation by such a being in my home. He was short, thin, with large, dark eyes. His head was large and oval-shaped and his skin was bluish-gray, like cigarette smoke.

I don’t remember any hair. He spoke to my mind, saying, “Don’t be afraid, please let me speak to you, we are like cousins, we are related.” My grandmother and grandfather had similar stories.

We saw a “city of lights” hovering over our town. I watched 60 or 70 people get out of their cars on I-84, pointing at the sky. The next morning, I called the Putnam County sheriff, who called the Stewart Air National Guard base to see what radar might have picked up. They never got back to him. I called the Federal Aviation Administration; they never got back to me. I never believed the “solution” officials came up with: That it was six ultralight planes flying wing tip to wing tip, with extra lights. Thousands of witnesses said they were not ultralight planes. The object was caught on video by my neighbor, and the sighting is in the museum at Area 51 [in Nevada], along with my testimony. It was sighted from Lower Westchester County to Albany.

Do you think Putnam’s stone chambers are connected to visitors?

Initially I thought they were early root cellars, but then I saw writings in archives indicating that settlers said the chambers were already here. We investigated about 40 chambers from Ridgefield, Connecticut, to near Cold Spring. The thought is they are portals. The doors are aligned to highlight the seasons.

Why do you quote Pope Francis and the Dalai Lama in your book?

The writings of nearly every religion in the world, including Christianity, include a great deal of commentary on spectacular events in the sky. Pope Francis has said extraterrestrials exist and that they can be baptized. In 1989, I spent two hours with the Dalai Lama at the dedication of the Buddhist monastery in Kent. A 20-minute meet-and-greet turned into two hours, and most of our conversation was about extraterrestrials. I could have used comments from just about every religious leader in the world.

As Putnam clerk, you appeared in 2013 on a number of Fox shows, including Sean Hannity and Fox and Friends, because you refused to release information from gun permits issued by the county, despite it being required by state law. Any regrets about that decision?

None. I’d do the same thing now. It wasn’t just about gun owners but also people who didn’t have weapons. Under state law, if I felt the information could be harmful to residents, I had the prerogative to not release it. I felt the information The Journal News wanted was unnecessary; it could put people in jeopardy. If I were a burglar looking for a place to break into, I’d go to a house that has no guns.