■ Dutchess County totaled 374 new COVID-19 cases for the week ending Wednesday (April 28), the third straight week cases have declined for the month. The county had 802 total cases for the first seven days of the month, 688 during the second week and 493 for the third week of April.

■ Each of New York’s state-run vaccination sites will begin taking walk-in appointments for first doses for anyone who is eligible starting Thursday (April 29), Gov. Andrew Cuomo said on Tuesday (April 27). The state-run sites include ones at the Westchester County Center in White Plains, SUNY Orange in Middletown and the Ulster County Fairgrounds in New Paltz.

■ People who are fully vaccinated (two weeks have passed since their final shot) do not have to wear mask outdoors, except when in crowds, and do not need to be restricted from work if asymptomatic after being exposed to someone positive for COVID-19, the Centers for Disease Control and Prevention said on Tuesday (April 27). The CDC also said that fully vaccinated residents of non-health care congregate facilities do not have to quarantine if exposed to someone positive and that people who have completed their shots can be exempted from routine screening for COVID-19.

■ Dutchess and Putnam counties both announced that they will resume use of the single-shot Johnson & Johnson vaccine after the federal government lifted a “pause” put in place over concerns about rare clotting in some recipients. Dutchess Health Commissioner Dr. Anil Vaidian said on Monday (April 26) the county would begin using the vaccine again this week, calling it “an important option in our efforts to vaccinate and protect our community against COVID-19.” Putnam said it would be using the vaccine during clinics scheduled for Tuesday (April 27) at the Philipstown Recreation Center in Garrison and Thursday (April 29) at Lakeview Plaza in Brewster.

■ New York State announced on Saturday (April 24) that it would follow the federal government’s recommendation and resume administering the one-shot Johnson & Johnson vaccine after an 11-day “pause” spurred by concerns over a rare clotting issue. The state’s resumption becomes “effective immediately,” Gov. Andrew Cuomo said. Both the Food and Drug Administration and the Centers for Disease Control and Prevention said on Friday (April 23) that they “have confidence that this vaccine is safe and effective in preventing COVID-19.”

■ Counties and the state are starting to vaccinate people who show up at their clinics without an appointment. Dutchess County was accepting walk-ins for its vaccination clinic on Thursday (April 22) at the former JCPenney at Poughkeepsie Galleria and Putnam was doing the same for its Thursday clinic at the Philipstown Rec in Garrison. On Wednesday (April 21), Gov. Andrew Cuomo said that, beginning Friday (April 23), 16 of the state-run mass vaccination sites would begin accepting walk-ins from people 60 years old and up.

■ Putnam County said on Monday (April 19) that it would be administering first doses of the two-shot Moderna vaccine to anyone who lives, works or attends school in New York, and is at least 18 years old, from 9 to 11 a.m. on Thursday (April 22) at the Philipstown Recreation Center in Garrison. Anyone who registers must be available for a second dose on May 20.

■ Vassar President Elizabeth Bradley announced on Thursday (April 16) that the college will return to full in-person learning and require all students to be vaccinated for the fall semester, which will begin on Aug. 30. The school will allow medical and religious exceptions to the vaccination requirement. The full plan can be found here.

■ St. Christopher’s Inn, the residential treatment program run by the Franciscan Friars of the Atonement at Graymoor in Garrison has also been affected by New York’s decision on Tuesday (April 13) to “pause” the use of the one-shot Johnson & Johnson vaccine while the federal government investigates blood clots in six woman receiving the drug. The program vaccinated program participants using Johnson & Johnson. “A single-shot is advantageous for the Inn because some of the men in recovery may not remain on site or in treatment long enough to complete the two-shot regimens,” said Jonathan Holz, communications director for Graymoor, on Wednesday (April 14).

■ Putnam canceled a clinic at the Philipstown Recreation Center on Tuesday (April 13) as New York joined other states in halting the use of the Johnson & Johnson vaccine while the federal government investigates the cases of six women in the U.S. who experienced severe blood clots after receiving the company’s drug. One woman died and another is in critical condition. Drug World in Cold Spring also announced that it was canceling appointments for people scheduled to receive the company’s vaccine.

■ New York is partnering with local health departments and federally qualified health centers to vaccinate farm and food production workers using mobile clinics, said Gov. Andrew Cuomo on Tuesday (April 13). Cuomo announced the program at Angry Orchards in Walden, which will receive an allocation of 500 vaccines for its workers.

■ As of Monday (April 12), the Putnam County Health Department still has appointments available for a clinic on Tuesday (April 13) at the Philipstown Recreation Center in Garrison. The county will be administering first doses of the two-shot Moderna vaccine to anyone who lives, works or attends school in the state. Visit the appointment site to register.

■ Indoor and outdoor graduation and commencement ceremonies will be allowed, with limited capacity, effective May 1, said Gov. Andrew Cuomo on Monday (April 12). Capacity will be determined by the size of the venue, whether the ceremony is indoors or outdoors, and the number of attendees, with limits ranging from 10 percent to 50 percent. Organizers and venues hosting ceremonies must follow health and safety protocols, including requiring face masks and social distancing. Detailed guidance can be found

■ New York State is allocating 35,000 vaccines to SUNY schools and private colleges to vaccinate residential and non-commuter students before they break for the summer, said Gov. Andrew Cuomo on Monday (April 12). Schools that are part of the SUNY system will receive 21,000 of the doses. “The 18 to 24 population is growing in positivity, and many of them are in colleges and universities,” said Cuomo.

■ Putnam’s Department of Health said on Friday (April 9) that it has been told by the state that the county will not be receiving any allocations of the Johnson & Johnson vaccine “in the near future” due to shortage linked to production problems.

■ As of Friday (April 9), dozens of appointments were still available for a vaccination clinic being held by Putnam County on Tuesday (April 13) at the Philipstown Recreation Center in Garrison. The county will be administering the one-shot Johnson & Johnson vaccine to people 18 years old and up who live or work in Putnam. Visit here make an appointment.

■ Beginning Saturday (April 10), Dutchess is offering free rides on its public transit buses to residents with vaccination appointments at the two county-run sites: the former JCPenny in Poughkeepsie Galleria and the former CVS in Dover.  Residents need only show drivers proof of their appointment, said County Executive Marc Molinaro on Friday (April 9). Residents can also ride for free to pop-up vaccination clinics as they are scheduled. Anyone who cannot use the regular fixed-route service and needs transportation can call 845-473-8424 to schedule a ride. Visit dutchessny.gov for more information.

■ New York’s allocation of Johnson & Johnson vaccines will decrease 88 percent, to 34,900 doses, because of production problems, Gov. Andrew Cuomo said on Friday (April 9). Cuomo also said the shortage should not result in the cancellation of any appointments.

■ New York Attorney General Letitia James is reminding residents that vaccinations are free and to report anyone charging them a fee for shots by filing a complaint online or calling 1-800-771-7755.

■ The Centers for Disease Control and Prevention is estimating that nearly 80 percent of Pre-K-12 teachers, school staff, and childcare workers had received at least their first shot of COVID-19 vaccine by the end of March. The estimate is based on a survey responses from nearly 13,000 school staff and almost 40,000 childcare workers, the CDC said on Tuesday (April 6).

■ A volunteer group called the Vaccine Appointment Assistance Team, an official unit of the Dutchess County Medical Reserve Corps, said on Tuesday (April 6) that it is available to help people, especially elderly and Spanish-speaking residents, book vaccine appointments. The group said it has booked thousands of appointments for people at state-operated and county-run clinics, and at pharmacies. To request an appointment, call 845-605-2562, email [email protected] or fill out the group’s online form.

■ More than 100 homebound seniors have been vaccinated in their homes under a partnership with CareMount Medical, Dutchess County said on Tuesday (April 6). The county’s public health nurses have vaccinated an additional 35 seniors in their homes, said the county. Seniors needing vaccination can call the Dutchess County Office for the Aging at 845-486-2555.

■ Gov. Andrew M. Cuomo announced on Monday (April 5) the launch of “Roll Up Your Sleeve,” a television and online advertising campaign to encourage people to get vaccinated. The campaign, which starts Wednesday (April 7), especially targets people in neighborhoods where COVID-19 cases have been high, said Cuomo. The ads were directed by Scott Burns, screenwriter for the global-pandemic movie Contagion, and shot at Columbia University’s Mailman School of Public Health.

■ People who are fully vaccinated (two weeks have passed since their final vaccine shot) can travel “at low risk to themselves” within the United States as long as they continue to wear mask, social-distance and take other precautions, according to updated guidance released on Friday (April 2) by the Centers for Disease Control and Prevention. Domestic travel does not require COVID-19 testing or post-travel quarantine, said the CDC. For international travel, fully vaccinated people do not need to get tested before leaving unless it is required by their destination, or quarantine after returning to the U.S. unless required by their state, but they need to have a negative test before returning to the U.S. and get tested again 3 to 5 days after arriving, the CDC says. 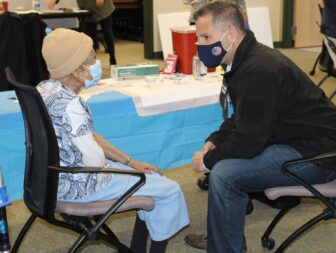 Dutchess County Executive Marc Molinaro talks with one of the 100 seniors receiving vaccines at a clinic in Poughkeepsie on Friday (April 2).

■ The state Department of Corrections and Community Supervision resumed inmate visitations at maximum security facilities on April 28 and its remaining prisons on May 1, citing declining COVID-19 cases and vaccinations of staff and inmates who are either 65 years old and up or have underlying health conditions.

■ Putnam County’s Department of Health is asking people who have not been vaccinated to share their reasons for not getting the shots in an anonymous survey. The survey is being administered in an English version and a Spanish version. The results will help “guide our department into better focusing on, and addressing, the needs of our unvaccinated citizens,” said county Health Commissioner Michael Nesheiwat.