As COVID-19 surged in Putnam County, so did municipal income from the mortgage tax on home sales, according to data reviewed by the Putnam County Legislature on Tuesday (May 4).

Convening by audio connection, the legislators unanimously approved disbursement, countywide, of the $3.2 million in revenue generated between Oct. 1 and March 31. Philipstown, Cold Spring and Nelsonville will receive nearly double what they got for the same period in 2019-20. 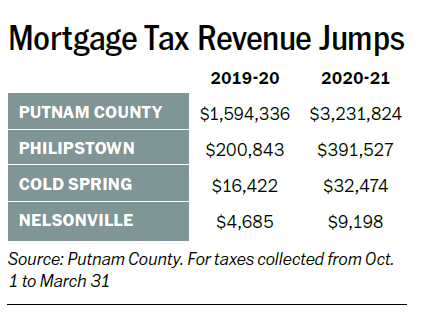 In Putnam County, the county and state tax on mortgages totals $1.05 per $100 of debt secured; the revenue reflects a growing number of homes and commercial buildings changing hands and/or larger mortgages.

The county total “is a significant amount of money for a six-month period,” noted Legislator Joseph Castellano of Brewster, who chairs the Audit and Administration Committee. “It shows we’re doing the right thing in Putnam. People are trying to move up to this county.”

The legislators also voted 8 to 0 (one lawmaker was absent) to approve $13,000 in grants for 12 arts/cultural organizations, including three in Philipstown.

Recommended by the Putnam Arts Council, the recipients included the Butterfield Library in Cold Spring, which received $800 for a yearlong series of events such as Writers Reading at the Library; $1,500 to the Hudson Valley Shakespeare Festival for its community playwriting program; and $1,200 to Manitoga in Garrison for an installation and acoustic performances.

In addition, the Doansburg Chamber Ensemble of Mahopac, which performs at St. Mary’s Episcopal Church in Cold Spring, was awarded $1,300; the Tompkins Corners Cultural Center in Putnam Valley received $1,000 for a theater production; and Collaborative Concepts, which held its outdoor sculpture exhibition in Garrison before moving it to the county’s Tilly Foster Farm near Brewster last fall, will get $1,000.

“It’s nice to see the investment in the arts, even if it’s a small” amount per group, said Legislator Nancy Montgomery, who represents Philipstown and part of Putnam Valley. “In Putnam County alone, arts and cultural organizations inject over $6 million into the economy annually.” In fact, the arts account for “way more than they’re given credit for,” Montgomery said. “It’s a huge industry in our region, some would say the only industry we have in Putnam County, certainly in my district.”

The legislators also unanimously approved the Sheriff’s Department plans to spend $43,010 to replace patrol car cameras and to use income from the inmates’ commissary to buy oxygen tanks ($885) and upgraded trauma-first aid kits ($2,712) for the jail and vehicles; computer accessories ($784) for the inmates’ law library; and 15 televisions ($485 each) for inmate viewing (the sheriff had wanted 30).

Montgomery and her colleagues parted ways when it came to issuing $500,000 in bonds to cover most of a $668,500 price tag for a Highway Department brine tank and vehicles. Putnam expects New York State to contribute the remaining $168,500. The equipment is part of a program to upgrade such county roads as Snake Hill and the short stretch of Cold Spring’s Fair Street that extends beyond the village border.

“I’m really in support of infrastructure projects and improvement,” Montgomery said. Yet, “I don’t know why we have to bond for them. If we were better fiscal managers, we wouldn’t have to bond,” or borrow the money.

“It’s going to be a savings in the long run,” Castellano replied.

“It seems a little excessive,” Montgomery said, before casting the lone “no” vote. “That money could well be put to use elsewhere.”