Will report to Quantico in the fall for training 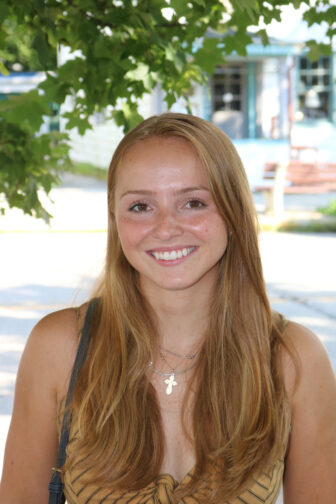 In December, The Current profiled Tanya Needham, 21, a Cold Spring resident and recent graduate of Officer Candidate School who had to decide whether to accept a commission in the U.S. Marine Corps or to pursue a career in kinesiology.

She decided to complete her bachelor’s degree at the University of Massachusetts before making a decision. Then, earlier this year, she chose the Marines.

“The more I thought about it, the more excited I got,” she said. “There wasn’t a doubt in my mind.”

On Oct. 4, Needham — who is 5 feet, 2 inches tall and weighs 125 pounds — will join the Marines as a second lieutenant and report for six months of training at the Marine Corps Base Quantico in Virginia. She expects it will be less grueling than the 10 weeks she spent in Officer Candidate School, which also took place at Quantico.

“Being a second lieutenant will be a little easier than being just a candidate and treated like a nobody,” she said. “Physically, it won’t be as strenuous; it’ll be more spread out, with a lot more academic and leadership training.”

Nevertheless, she has been running and hiking with rocks and weights to prepare. The four ligaments she tore at Officer Candidate School have healed. There should be familiar faces among the 200 or so officers at the training: classmates from candidate school.

As the six months wind down, Lt. Needham will be asked to rank her areas of interest within the Marine Corps, which are ground or air intelligence or logistics, she said. “I’m fluent in Russian,” she noted. “Hopefully they will take that into account.”

She also will be asked to rank her preferred destinations. “There are three bases in California and three or four in Hawaii,” she said. “Everyone wants to go there!”

Needham will be making a four-year commitment, and perhaps a three-year extension, but said she doesn’t plan to make the Marines a career. She’d still like to get a master’s degree in kinesiology, “then see where it goes from there.”