The group run hadn’t even started yet and I was exhausted.

Today’s plan was a 6.5-mile loop up into the Highlands and back, with about 1,000 feet of climbing. But I had run 20 miles the day before in blistering summer heat, and was still feeling the effects. I told one of the group leaders that he should not wait for me, that I knew the way, but after yesterday’s effort I simply didn’t know how long — or if — I’d be able to keep up.

He told me not to worry. “You’re out here. That’s what matters.”

Over the six weeks of these group runs organized by the pop-up Tracksmith shop in Beacon, I’d been thinking a lot about the name of this column. It’s true that many of the people I’ve written about — those trying to set Fastest Known Time records; run from Albany to Beacon; climb all the High Peaks in the Catskills; or carry frogs across a busy road in the middle of the night — are all a bit out there, by which I mean crazy. But they’re also willing to go out there to tough places and do hard things because nothing changes if you stay home. 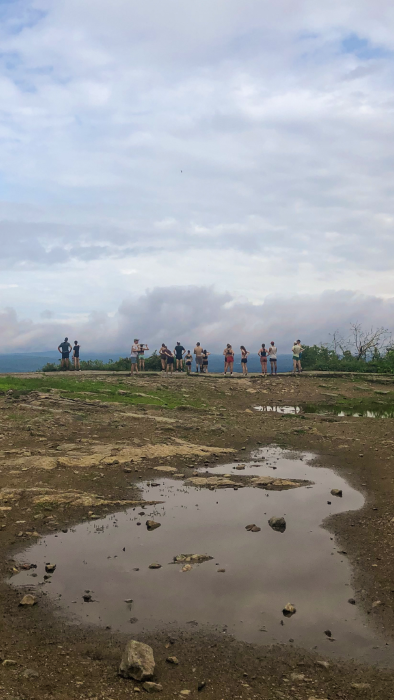 Catching up with the others (Photo by B. Cronin)

It’s certainly easier than spending the last six weeks trying to keep up in the Tracksmith runs with elites and sub-elites, Olympic hopefuls and Olympic veterans, and amateur runners who were a lot like me except much faster. To make matters worse, the runs usually started by covering the length of Main Street, so that everyone in town could watch me immediately fall behind.

“You gotta keep up!” yelled a man in a white pickup truck, laughing. I tried to play it cool, but a few minutes later, I checked my watch and noticed my pace, going uphill, had increased from an 8-minute to  7-minute mile fueled by anger. And still, the other runners continued to disappear into the distance, leaving me alone. Again.

Why was I out here? Couldn’t I find a less consistently humiliating way to spend my weekend mornings? But I suppose that’s the point of training: to improve. My goal wasn’t to catch the runners ahead of me. I just hoped to beat the runner I was the week or month or years before, who never would have imagined running a 100-mile race.

Which is to say: Today (Aug. 13), I’m on my way to run the Eastern States 100 in central Pennsylvania: 103 miles over 20,000 feet of elevation gain, filled with rocks and rattlesnakes and devoid of cellphone service. The 36-hour time limit may seem generous until you learn that for many years, only about one of every three entrants finished. The rate has been inching upward recently, which means the race has attracted a hardier breed and/or frightened off newbies who have more sense than I do.

I’m not sure what horrors or delights await me. Will I vomit? Hallucinate? Chafe in places I’ve never chafed? It will probably involve periods in which I’ll experience the too-familiar feeling of inadequacy as other runners disappear ahead of me.

Clearly, the smart thing to do would be to stick to what I’ve already done. But you don’t know your limits unless you don’t test them, right? Sometimes I’ve surprised myself, such as finishing ultramarathons in times faster than I thought possible. When that happens, your worldview changes. What else, I wonder, am I unfairly telling myself I can’t do?

In this weekend’s race, the odds are against me. But when the gun goes off in the darkness at 5 a.m. on Saturday, I’ll remind myself that the hard part was making it to the starting line. The finish line? We’ll see.