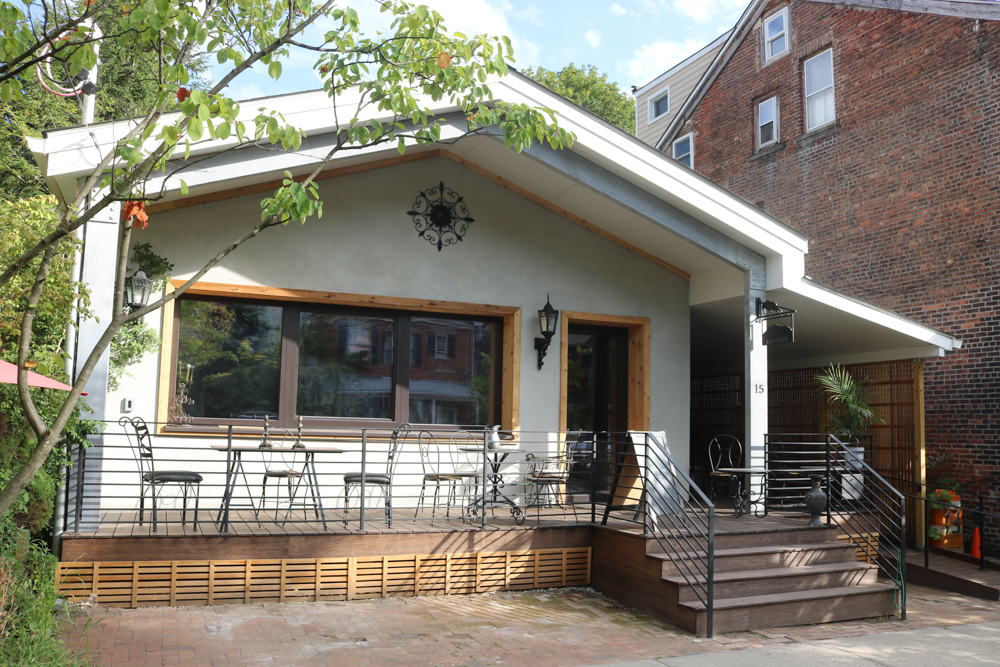 he building at 15 Main St. in Cold Spring is being renovated to house a cafe and wine bar called Cro’ Nest. (Photo by M. Turton)

At the Tuesday (Aug. 17) meeting of the Village Board, Merandy said he hoped to soon ask Royal Carting and AAA Cartage to bid on collecting Cold Spring trash and recyclables. If either bid is low enough, the winning firm would take over collections for the Highway Department, which is short-staffed.

Merandy said that picking up trash and recyclables consumes nearly half of department employees’ time.

In the past, Merandy said the cost of paying a firm such as Royal Carting would require a tax increase. Last month, Merandy said collection by village employees costs about $158,000 a year, and he estimated that hiring an outside firm would cost approximately $212,000.

In recent discussions with Royal Carting, however, the firm suggested it might be able to deliver the service for less, Merandy said. If collection is privatized, the village also would no longer need to purchase a new garbage truck at a cost of $115,000 to $120,000.

Merandy said a plan recently presented to the Village Board by its Parking Committee can’t immediately be implemented.

“There’s a lot going on,” he said, citing the worker shortage at the Highway Department, which would be responsible for installing signs. A full-time employee recently resigned and a summer employee returned to college. Merandy said “help wanted” ads have produced no results.

“We can’t [further] burden the crew,” he said, noting that if trash collection is contracted out, “we can get away with a three-man crew.”

The mayor also said an assistant is needed to help the village clerk handle the regulation of short-term rentals under a recently passed law. Applications for permits can be submitted starting next month. The clerk also would distribute residential parking permits.

Trustee Marie Early, who served on the Parking Committee with the mayor, said plans for paid parking at the municipal lot on Fair Street and at Mayor’s Park using a smartphone app can go ahead.

Merandy asked the Parking Committee to look into the cost of contracting out installation of signage in the 11-street residential permit area.

A request by Juhee Lee-Hartford of River Architects for a temporary certificate of occupancy for a cafe and wine bar called Cro’ Nest at 15 Main St. was put on hold.

Trustees outlined a number of aspects of the project that don’t conform to the plans approved by the Planning Board, including a front deck and an access ramp that encroaches 6 feet onto village property.

Merandy also said space at the rear of the building, approved as a tourist home, is now advertised as a one-bedroom apartment, a change that also requires Planning Board approval.

The mayor said he will discuss the project with Planning Board Chair Matt Francisco and the building inspector. Lee-Hartford will appear before the Village Board again next week.