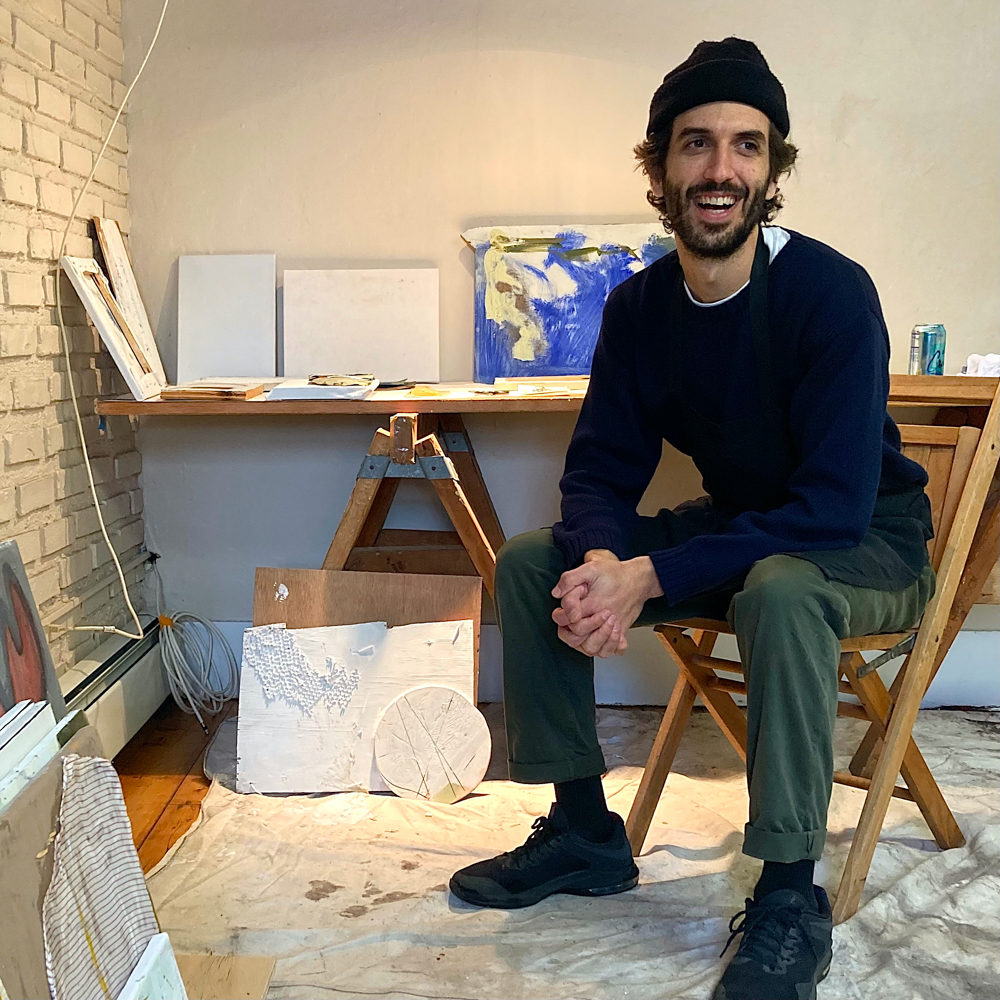 Despite, or perhaps owing in part to the pandemic, Cold Spring painter Daniel Graham Loxton is having a moment — a few moments, in fact.

On Sept. 18, a solo exhibition of his work, The Patron Saint of Turning, will open at Projektraum London. It’s his first show in the U.K.

Last year, Loxton had a solo show in Copenhagen but could not attend because of the COVID-19 shutdown. This year, he hopes to soon follow his artwork, which has already been shipped. In the meantime, he’s at work in his village studio.

The painter came to Cold Spring from Manhattan, where he graduated from the School of Visual Arts and lived for many years. He says he chose the Highlands because of the less expensive studio space, but he’s been pleasantly surprised by other benefits, such as the easy access to the outdoors.

Asked to describe his art, Loxton says he “employs Renaissance painting techniques alongside philosophies of contemporary abstraction.” He uses antiquated painting materials such as wax and pigment powder, combined with collage elements. “The paintings reveal themselves slowly as different materials, attitudes and elements become embedded within the layers,” he says.

“Someone called me a ‘post-urban painter,’ which is applicable because I have all this urban training and take this with me to a place where I’m most often looking at Hudson Valley landscapes,” he says. “But I wasn’t quite as urban as I thought, which has been surprising. For me it’s not about the scene, it’s about the quiet contemplation, and it makes for a nice divide psychologically.”

Loxton spent his first two years at the School of Visual Arts studying film and video and found himself making experimental films that felt closer to painting. He spent his two remaining years studying fine arts.

“The moving images became static,” he explains. “Painting seemed organic, and I became more interested in seeing galleries and paintings than in seeing films, even avant-garde ones.”

Loxton’s first paintings were figurative. Describing his evolution, he says, “I’m a painter whose origins are in the Old Masters. I learned many of their material techniques, for instance, such as how to mix oil with the dry pigment. The components of a painting are often what the painting is about.” He adds: “I’m inspired by abstract painters who have their roots in figuration.”

He doesn’t start with an idea, which he then depicts on canvas. Instead, as he says, “the thought process is happening at the same time as the hand — head to hand. The best moves on a canvas often don’t feel like I did them. Each move tends to lead to a subsequent move until I decide to stop the process. It’s about being at the edge of understanding, and being ready for the moments when the understanding happens.”

Recently, there’s been a decided upswing in Loxton’s visibility in the global art world. His Copenhagen show, Pillow for Dürer, at Jir Sandel, came about after a yearslong online friendship with a group of artists in Denmark.

Though limitations on capacity meant that few people in Copenhagen saw his work in person, “there was great press, more in-depth than usual,” he recalls. “That was a catalyst; I was on this small but important world stage.”

That stage now includes Projektraum London, an exhibition space on the lower level of the Claas Reiss gallery in central London. Loxton was pleased to learn that he’s the first American artist whose work will be shown there.

He said Reiss visited with him three or four times remotely over the course of a year. The lockdown “gave him time, in his big empty gallery with no visitors, to commune with artists over Zoom,” Loxton said.

This is a heady period for the artist, who will also be half of a two-person show in February at the Abattoir Gallery in Cleveland, and soon publish a book of drawings with a forward by Chris Sharp, a Los Angeles-based curator.

“It feels like an overnight success,” Loxton says. “I’m unwrapping my mind to tell myself, ‘This is your year.’ ”

Projektraum London, located at 96 Robert St. in London, is open from 10 a.m. to 6 p.m. Wednesday to Friday and noon to 6 p.m. Saturday. For details, see claasreiss.com/projektraum-london.

One thought on “Old World Meets the New”