The folk-music singer and activist Pete Seeger, a longtime resident of Beacon, had agreed to perform in 1975 at a ceremony for the Balmville Tree, a 17th-century eastern cottonwood named for the Town of Newburgh community where it stood.

In a letter to the Town Board, Klotz called Seeger a “left-wing extremist” who was “not the kind of ‘dignitary’ we want our students to look up to.”

“Mr. Seeger may be known for his advocacy of a cleaner Hudson River and other ecological projects, but he is also a veteran supporter of causes that are hardly exemplary for the young people of our community,” Klotz wrote.

Considered an icon for marrying his music to causes like civil and workers’ rights, anti-war efforts and environmentalism, Seeger (who died in 2014 at age 94) was hated by others for the same reason and once sentenced to a year in prison for refusing to answer questions before the House Un-American Activities Committee. (The sentence was thrown out on appeal.)

Now, he is now receiving one of the most-American of honors.

The U.S. Postal Service announced on Nov. 1 that Seeger’s image will grace a first-class stamp to be issued next year. It will be the tenth imprint of a Music Icons series that has included Johnny Cash, Ray Charles, Marvin Gaye and John Lennon.

In addition to Pete Seeger, the USPS announced stamps honoring:

Katherine Graham (1917-2001), the former owner and president of The Washington Post Co., and publisher of its flagship newspaper;

Eugenie Clark (1922-2015), a marine biologist who advocated the protection of sharks and marine environments; 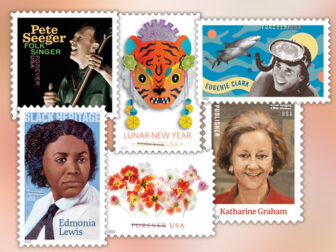 The stamp is based on a photograph taken in the 1960s by his son, Dan Seeger.

In retrospectives published in The Current four days after Seeger’s death and to mark what would have been his 100th birthday, Highlands residents shared anecdotes of him serving strawberry shortcake at a riverfront festival, singing Christmas carols on Main Street, playing his banjo at local restaurants like BJs and founding the city’s Martin Luther King Jr. parade and a music group for local children.

Manna Jo Greene, an Ulster County legislator and environmental director for Hudson River Sloop Clearwater, the Beacon-based environmental organization Seeger founded in 1966 with his late wife, Toshi, said the singer and Martin Luther King Jr. were the “greatest influences” on her life.

She recalled once running into Seeger at Grand Central Station, where they both waited for a train to the Hudson Valley. She watched as he introduced himself to a young man carrying a guitar and they continued talking on the ride north.

“I just thought, as world famous and renowned as he is, he’s so humble and approachable,” she said. “The fact that the Postal Service is celebrating Pete Seeger’s life is such a vindication — that the truth will out. He stood for so many just causes, and was persistent throughout his life and consistent, and he ended up, in this case, triumphing.”

Seeger’s accomplishments include iconic songs such as “Where Have All the Flowers Gone” and “If I Had a Hammer”; three Grammy Awards; and a book, Hard Hitting Songs for Hard-Hit People, written with Woody Guthrie about folk songs from the Depression and labor movements of the 1930s. Seeger was inducted into the Rock & Roll Hall of Fame in 1996.

Thirty years earlier, Pete and Toshi, who died in 2013, had founded Clearwater to fight for a cleanup of the estuary, a “foul sewer of a waterway” that was a dumping ground for industrial and municipal waste, Greene said.

The Seegers and the organization, which built a sloop named Clearwater in 1969, were at the forefront of a movement that led to the passage, in 1972, of the Clean Water Act.