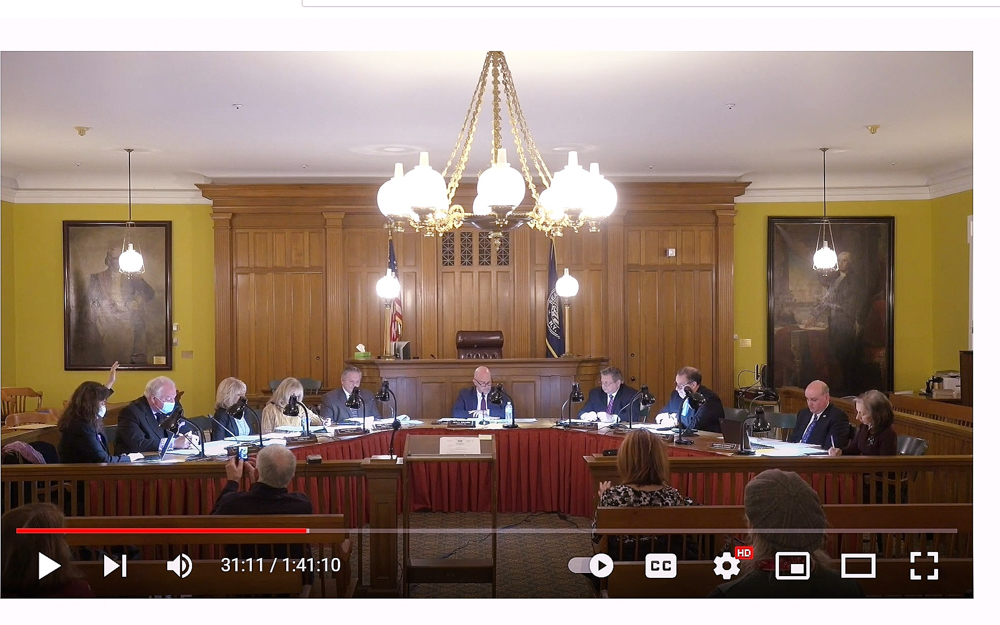 In a screenshot from the Putnam County Legislature's Tuesday (Feb. 1) meeting in Carmel, Legislator Nancy Montgomery, far left, raises her hand in a request to be allowed to comment.

The Putnam County Legislature voted 6-2 on Tuesday (Feb. 1) to spend $400,000 in federal COVID-19 funds on asbestos removal and other upgrades at the Putnam County Golf Course, disregarding objections from two legislators and prompting an outcry from residents, who were barred from speaking until after the vote.

Legislators Nancy Montgomery, who represents Philipstown and part of Putnam Valley, and William Gouldman, who represents most of Putnam Valley, cast the two “no” votes at the 1 hour, 41 minute session in Putnam’s Old Courthouse in Carmel. Montgomery and Gouldman also were the only legislators Tuesday to wear masks. She is the Legislature’s sole Democrat; he is a Republican, like their seven colleagues.

Sparking more friction, Legislator Neal Sullivan of Carmel-Mahopac, who chairs the Legislature, announced a rule restricting members to one comment each per agenda item.

Controversy also arose when Montgomery requested that Putnam help pay for such necessities as the pickup of tourism-related trash and upkeep of two public washrooms in Cold Spring, which draws large crowds of visitors.

The assignment of $400,000 in American Rescue Plan Act money to the golf course was approved last week by the legislative Audit Committee, which sent the measure to the full Legislature for ratification.

As she had during the Audit Committee review, Montgomery questioned why Putnam is using ARPA money for the golf course, which made a profit in 2021 and also can tap a special account into which the county puts $250,000 yearly and whose balance remains obscure, though one county official estimated it at $1 million. “We are ignoring that fund” and instead taking money meant for rescuing an economic sector hit hard by COVID-19, she said. “So, we’re rescuing a golf course that’s already flush with money.”

Montgomery also noted that about three dozen residents wrote to legislators expressing concerns about the use of the $400,000.

“We’re not rescuing the golf course. We’re improving and fixing it,” Sullivan replied.

Gouldman argued that ARPA money could better go toward such projects as fixing three malfunctioning traffic lights in Putnam Valley and renovating the former Sheriff’s Department substation there so it can house other county services.

But Legislator Carl Albano of Carmel said the golf course work “is good use of the money. We want to keep the facility healthy.”

“The golf course serves our community. It is not an elite course. It is the people’s golf course,” said Legislator Ginny Nacerino of Patterson. She and Legislator Paul Jonke of Southeast attributed much of the opposition from residents to allegations that Putnam is misapplying the $400,000. “There was a campaign to spin it that way,” said Nacerino, who described many letters as copied and pasted.

Stacy Dumont, who wrote a letter, contradicted Nacerino (who defeated her in the race in November to represent Patterson on the Legislature). “My letter was not copied and pasted,” Dumont said. “I don’t think it’s the right place to spend the money.”

Other residents (none from Philipstown) also blasted use of the $400,000 for the golf course.

“The optics are terrible,” said Judy Allen, of Putnam Valley.

“There are a lot of people in this county living very marginally,” said a Putnam Valley man, proposing that Putnam use ARPA funds “to help people in need.”

A Kent woman suggested the county “take a loan from people who use the golf course.” By using ARPA money, “you’re putting the needs of the few before those of the many. And that’s what hurts.”

Albano said allocation of the ARPA dollars would be discussed publicly. “And we’ll spend it wisely.”

In a Jan. 28 letter to Mayor Kathleen Foley of Cold Spring, County Executive MaryEllen Odell asked for “feedback regarding the possibility of partnering in ARPA-related projects … to aid the people of Putnam County in the pandemic recovery.” Nelsonville received a similar letter, although Supervisor John Van Tassel said on Monday (Jan. 31) that Philipstown’s version had not yet arrived. Odell instructed towns and villages to provide input by Feb. 28.

Montgomery said that although Odell’s letter did not go out to some communities until Monday, the county has known about its ARPA share since March 2021.

The issue of restoring the aid that Putnam once provided Cold Spring to help with trash pickup in busy tourism periods surfaced when the Legislature voted 7-1, with Montgomery the dissenting “no,” to transfer $7,103 for the county tourism bureau to fund a “Film Putnam” initiative and similar activities.

Promotion of Putnam as a filming location is already supported by other programs, she said, while tourism-related issues have been ignored, including those that involve health and safety, such as collecting trash generated by heavy tourism and helping maintain of the public restrooms in Cold Spring.

“We generate the most tourism and the most sales tax from tourism,” she said.

Unlike most counties in New York, Putnam does not return a portion of sales tax to the municipalities in which it originates.

“I’m not aware of the county taking care of bathrooms, anywhere, or garbage removal,” Albano added.

In other business, Sullivan revealed a new legislative meeting policy. “Everybody is going to get one chance to speak on these issues” coming before the Legislature. “Then we’re going to move on to the next item” on the agenda. “We’re only going to have one comment each.”

“We can’t follow up on a false claim that another legislator made?” Montgomery asked.

“How is that democracy?” Montgomery questioned.

“There will be no crosstalk or commenting on other legislators’ comments,” Sullivan emphasized. “That has nothing to do with democracy.”

“We’re not here to debate the issues,” which should occur in committee sessions, Nacerino stated.

Albano agreed. “It’s amazing that when we’re in front of a camera, these questions come up,” he said, referring to the device that, with the legislators again convening in person, records formal monthly meetings (but not committee sessions). That monthly meeting “is the time to vote and make a simple comment” only — not to debate, he said.

The eight Republican legislators also gather before many meetings in a secret session as a caucus, where no publicly available minutes are kept and state law allows any topic to be discussed.