The Cold Spring Village Board, at its Wednesday (May 18) workshop, began discussions that will almost certainly result in significant changes to the regulation of short-term rentals, such as those booked at Airbnb.

The existing law was adopted, 3-2, by the previous administration in July.

“Why are we undertaking a review of the law so soon?” asked Mayor Kathleen Foley, who as a trustee before the November election voted against the law. “Simple answer is, it’s not working.”

Foley said there have been only four applications for the permits required under the law. It is estimated about 35 STRs operate in the village.

“It’s clear that there has been something of an organized civil disobedience,” Foley said. “Multiple owners and operators have refused to apply for permits, and that alone should tell us the law doesn’t work.”

She said the STRs operating without inspections deprive the village of revenue from application and permit fees while “contributing nothing to the municipal costs associated with tourism,” including wear and tear on infrastructure.

The village has received 20 complaints about STRs since the law was enacted, although 18 were made by one person against 18 STRs, two of which were operating with permits. None were “nuisance” complaints over issues such as noise.

The village issued notices to the STR owners operating without permits, “and they will be issued again if operations do not cease,” Foley said. 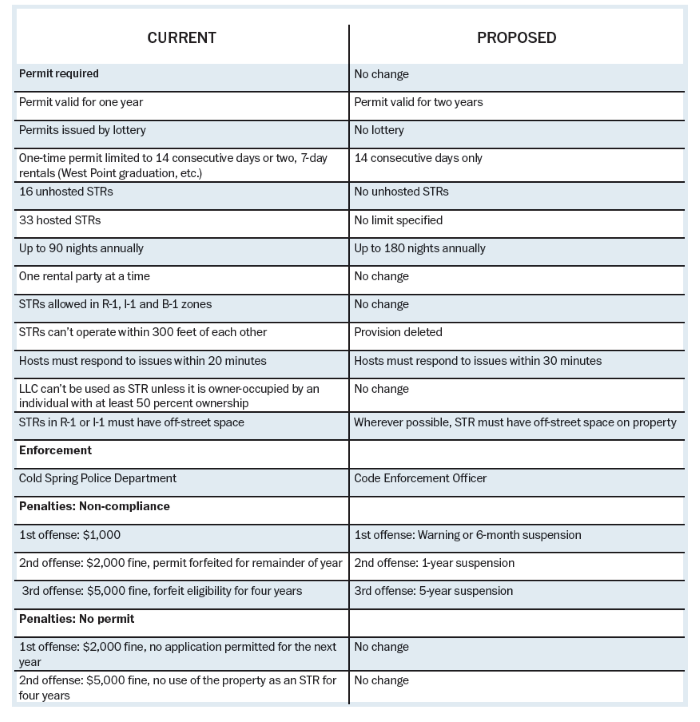 One shortcoming of the existing law, Foley said, is that after an initial inspection the burden for enforcement falls on the Cold Spring Police Department, even though violations are civil, not criminal, in nature. The draft revisions include shifting enforcement to the building inspector/code enforcement officer.

Several of the revisions being considered will simplify the law, which, when it was being drafted last year, was described as too complex by a number of STR operators, some of whom hinted at legal action against the village.

Major revisions being discussed include abolishing use of a lottery system for issuing permits; deleting the stipulation that STRs cannot operate within 300 feet of each other; increasing the permit period from one to two years; banning STRs where the owner does not live on-site; providing no limits on the number of permits for hosted STRs; and increasing the number of operating days from 90 to 180 per year.

The proposed revisions were drafted by Trustee Eliza Starbuck and are available at coldspringny.gov.

“We’re at the very beginning of this discussion,” Foley said. “There will be a lot of pieces that shift; there will be elements that some will be unhappy with, no matter what we do.”

The board has called for volunteers to serve on an ad hoc committee to provide feedback on the proposed changes. The deadline for applications is Wednesday (May 25). A public hearing is required before any changes are made.