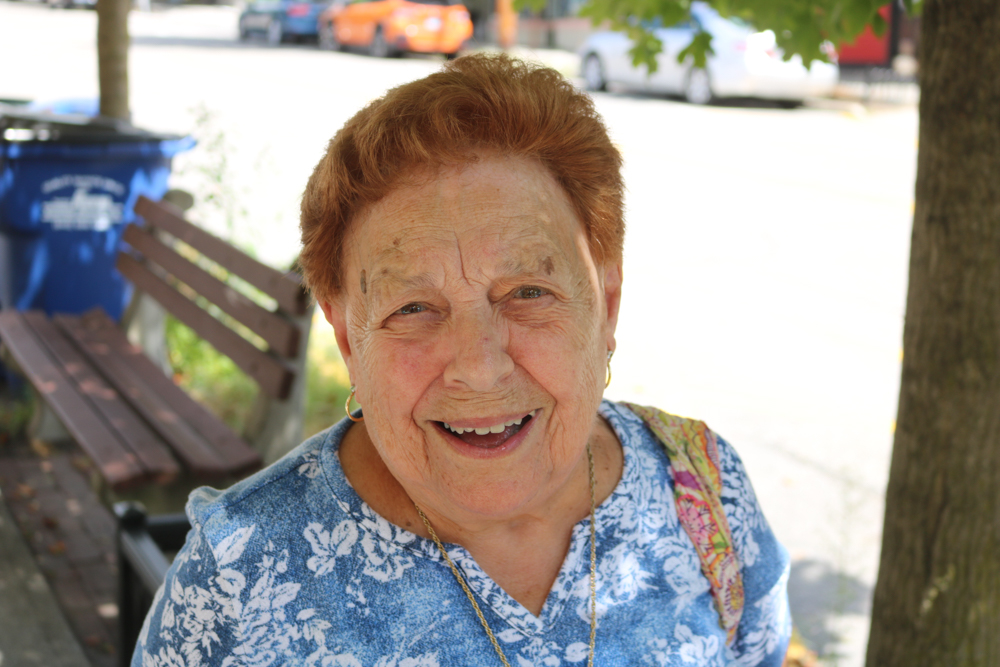 Josephine “Chickie” (La Martina) Pidala, 95, was born in Baltimore and grew up in Queens. She has lived in Cold Spring for 64 years.

How did you get the name “Chickie”?

Well, you know Italians … When I was born, I was supposed to take my father’s mother’s name. But there were already four or five Josephines in the family. So, my father said, “I don’t want to name her that.” There was an argument and my mother got upset. So, my father said, “OK, name her Josephine, but I will never call her that.” Somehow, he started calling me Chickie, and it stuck, even in school. When I grew up, the fella I dated and later married, Frank Pidala, had two brothers. They both married girls named Josephine and also moved to Cold Spring. So, we had three Josephine Pidalas here in the village. I had to start using my middle name, Rosina. But everybody called me Chickie, even the kids.

It was a quiet neighborhood. It was diverse and I’m glad. The people were good. There was no money, so we were always tenants. I wasn’t brought up like the other Italian girls. They stayed home and did the housework. I did my share, but my father never treated us that way. You got to experience more, get out there and do things. When I was 5, I had a baseball uniform, bat, glove and ball. My father would take me out on the street and play with me. Then I’d end up playing stickball with the boys. We had races on the street. I was more of a tomboy than I was a girl. I went to PS 73 in Maspeth and Grover Cleveland High School on the border of Queens and Brooklyn. Frank and I went to the same schools; we started dating when I was 15.

They say everyone has a claim to fame; what’s yours?

When my grandmother died, leaving seven children, my father was 7. My grandfather liked to gallivant around, so he took the children to his mother’s. She couldn’t take care of seven kids, so she kept the two girls and sent the boys to live with the Jesuits in Baltimore. Babe Ruth’s father owned a corner bar there. Babe’s mother died when he was young, and he’d sometimes wander out in the street by the bar. His father put him in the Jesuit boys’ home, with my father and his brothers. So, my father grew up with Babe Ruth. That’s my claim to fame. There’s a picture in the Orioles’ Hall of Fame of Babe, standing by a bunk bed with my uncle. I’ve seen it.

How did you end up in Cold Spring?

I was 18. It was after the war and Frank came up to Cold Spring to visit his grandparents.  Haldane was having its prom, but they only had 15 grads, so they opened it up to others. Frank called me and said, “Get a gown and come up.” I got off the train, looked up Main Street and fell in love with it. I loved the mountains, the water, the country atmosphere. I guess it was my Sicilian background. We moved here in 1958. The village was very family oriented; we took care of each other. If someone passed away, you cooked for the family. My husband was disabled; he was injured three times flying in B-17s. The butcher knew that, so he’d call me and say, “What do you need today, Chickie?” And he’d deliver it. Frank and I would go to the Italian American Club, above Stone Street, for dinner every once in a while, or to George and Dee’s on Main Street to have a beer. We’d scoop the loop. We’d take the kids down to the river to swim. If you needed something that wasn’t available in the stores here, you’d go to Beacon. Once in a blue moon, you made the trip all the way up to Poughkeepsie.

What are your thoughts now, on life and the future?

When I think back, the upbringing I got helped me to get through what I had to get through as an adult. I just have the faith; it’s gotten me through a lot of bad times. Everyone finds their own way, how to get through things. I go to church, but I can’t get my family to go. I let them all find their own way. Because the more you fight or interfere or preach, you drive them away altogether. So, I just let everybody be who they are and what they want to be. My attitude is, if you don’t laugh, you’ll pass on. You can always find someone in a worse situation.