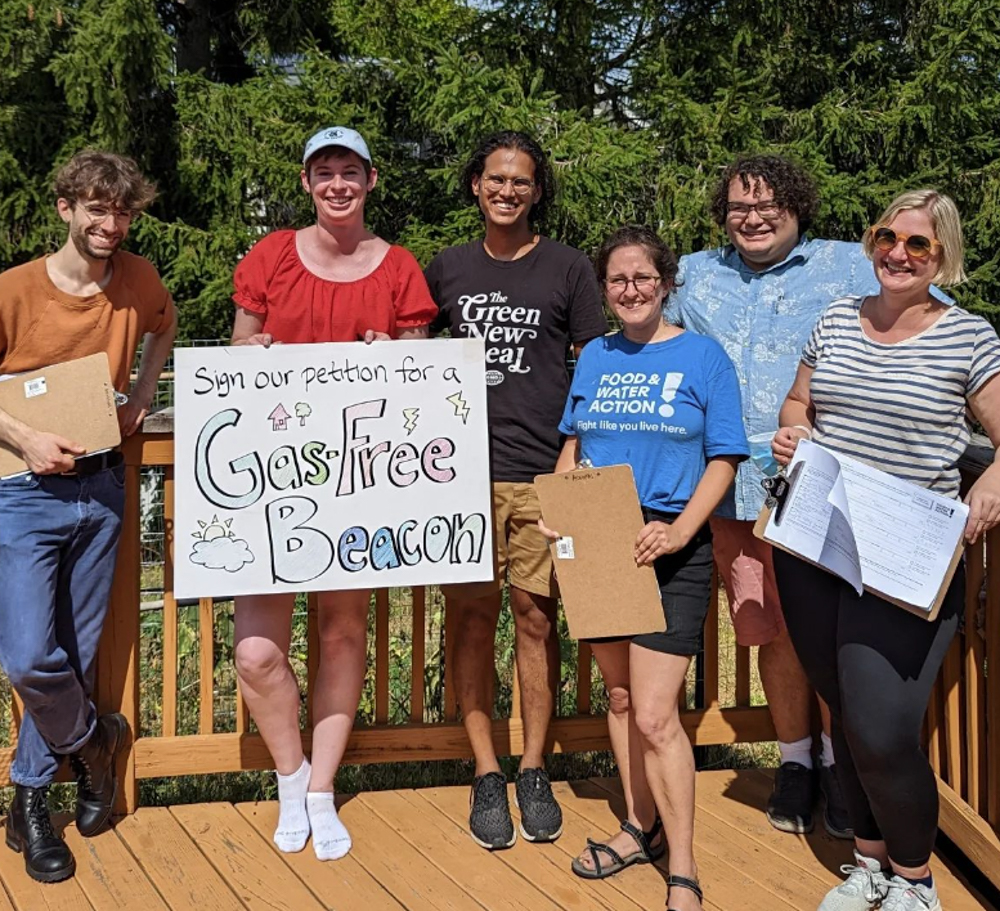 Members of Beacon Climate Action Now canvassed with a petition calling for a ban on gas and oil in new construction in the city. (Photo provided)

Last month, the World Wildlife Fund released its annual Living Planet Report, and it’s devastating. There has been an average 69 percent decline in the populations of nearly 32,000 monitored species of mammals, birds, fish, reptiles and amphibians since 1970, just 52 years ago. We are living through crises because of the unsustainable use of our planet’s resources.

More and more people are alarmed, if not frightened, by these increasing threats but often don’t know how to channel that into action that will result in the large-scale changes that are needed.

And yet millions of environmentalists sit out the elections. The Environmental Voter Project estimates that more than 8 million people who consider themselves environmentalists did not vote in the 2020 presidential election and more than 12 million skipped the 2018 midterms. If you want political leaders at every level, from local governments to state and federal, to pass climate or environmental legislation, voting is the starting point.

Local organizations can drive the vote. A few months ago, Beacon Climate Action Now was created by residents who wanted to get involved locally, influence policy and magnify their impact as individuals.

Veekas Ashoka, one of its founding members, says the group is concerned about a wide scope of issues, including affordable housing, labor and health. He says its members have two goals: to enact climate-change policy and to take care of each other.

The climate crisis, he says, “is going to get a lot worse, before it gets better. People join because they feel hopeless. To have hope, you need to practice hope.”

Beacon Climate Action Now decided to focus on short, “winnable” campaigns. The first is to get the City of Beacon to pass legislation that would ban the use of oil or gas in new construction, modeled after a gas ban in New York City.

As part of the campaign, members have gone door-to-door to ask residents to sign petitions in support of the proposal. It’s an opportunity to share with people how getting off gas means lower utility bills and better air quality, and that the cost of installing gas versus electric equipment is comparable.

In a short time since its founding, Beacon Climate Action Now has grown to 50 members, including some from Philipstown and Fishkill. (See linktr.ee/beaconcan.)

Tara Vamos, who lives in Cold Spring, says she has been inspired by the group. “It’s been nice to get together in the community and work toward a common goal,” she says. “People are so engaged.”

On Oct. 15, the group hosted the Taproots Fall Festival and collected around $300 worth of food for the community pantry. The event had live music, activities for children and a trivia game to encourage people to visit tables set up by organizations such as Beacon Prison Rides, Beacon Mutual Aid and others devoted to issues such as housing and decarbonization in the home, as well as state issues. Ashoka said 12 people signed up on the spot to lobby elected officials.

Part of what makes Beacon Climate Action Now appealing is that its members are trying to work together in the community, building ties that will get them through the tough times, an important and often overlooked piece of climate action.

Donna Minkowitz, a Beacon resident, says she was inspired to get more involved in fighting climate change by the satirical film Don’t Look Up. She had never been involved with a climate change group, she says, although back in the day she protested against nuclear power plants and fracking.

“I’m happy that, as I grow older in Beacon, there will be a group with whom I can work on keeping people safe,” she says.