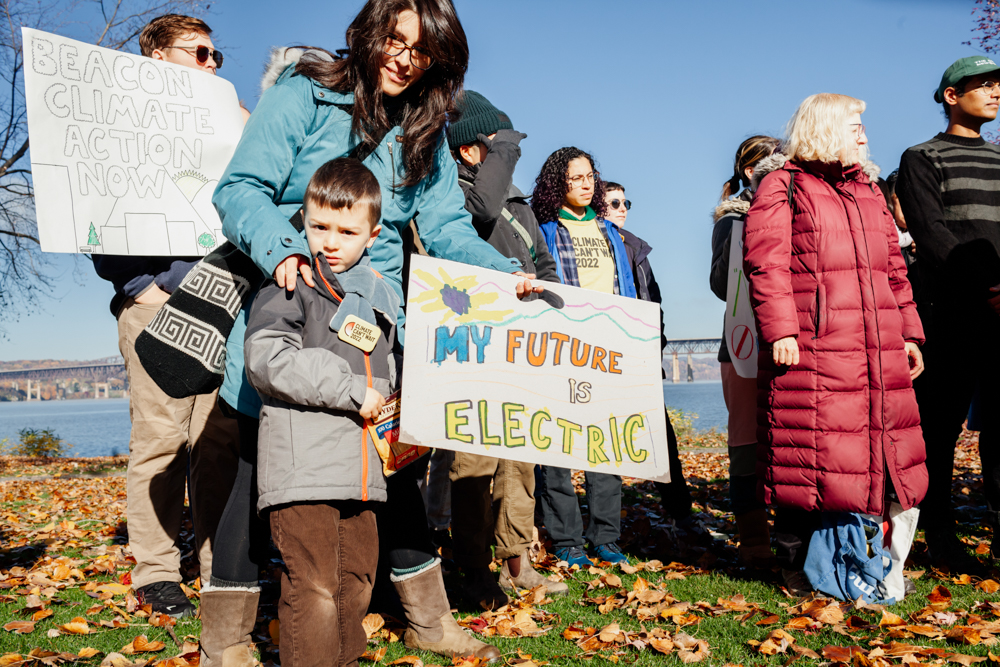 Climate activists gathered at the Beacon waterfront on Oct. 29 to encourage a transition away from fossil fuel-derived energy. The Beacon City Council could consider such a proposal this month. (Photo by Valerie Shively)

Members of the Beacon City Council plan on Monday (Nov. 7) to introduce a proposal that would effectively ban natural gas hookups in new homes and commercial buildings, as well as major renovations.

The proposal, modeled after legislation passed last year in New York City and Ithaca, was announced at a rally on Oct. 29 at the Beacon waterfront, where climate activists celebrated the state’s denial a year ago of a request by Danskammer Energy to build a natural gas-fired power plant on the Hudson River in Newburgh.

While state law does not authorize municipalities to ban natural gas hookups, Council Member Dan Aymar-Blair said he plans to propose adding emissions limits to the building code that gas appliances cannot meet. In doing so, Aymar-Blair said he hopes Beacon will “light a spark in the Hudson Valley in taking bold action to fight climate change.”

The shift could save homeowners money. According to Win Climate, a collective of data scientists, financial analysts and policy researchers, new single-family homes in New York state could save $904 per year if built with an electric-powered, air-source heat pump, instead of a furnace or boiler that uses natural gas or oil. The average annual savings would be about $260 higher if builders opt for ground-source, or geothermal, heat pumps.

Win Climate published its analysis of heating costs in New York’s climate zones in October to illustrate the potential benefits of the All-Electric Building Act, which the state Legislature is expected to consider next year. Gov. Kathy Hochul’s fiscal 2023 budget proposes ending the use of fossil fuels in new construction statewide by 2027.

A study published earlier this year in the journal Environmental Science & Technology found that gas stoves emit methane and carbon dioxide — the two most abundant greenhouse gases — and nitrogen oxide, which it said increases the risks of cardiovascular problems and respiratory disease. The stoves emit methane even when turned off, researchers found.

“It would be very wise to get these appliances out of homes for public health reasons,” Aymar-Blair said in an interview this week.

New York City’s legislation limits the emissions allowed in newly constructed buildings, with exceptions for hospitals, laundromats and crematoriums. Ithaca’s measure, approved a year ago, goes further and will require new and existing buildings in the city to be electrified by 2030, the same year the city has pledged to become carbon-neutral. Dozens of cities in California have enacted similar laws.

In Beacon, the renovated Tompkins Hose firehouse, which could open in 2024, will be all electric. The city currently draws about 70 percent of the power used in municipal buildings from a solar panel farm near Dennings Point. Additional solar installations are also planned for the city Highway Garage.

Yvette Valdés Smith, one of two Dutchess County legislators who represent Beacon, attended the waterfront rally and said this week that she could introduce a countywide plan if the proposal to electrify passes the City Council.

“Once we see this strong example and see it working in Beacon, I will have data to stand on” to make the pitch at the county level, Valdés Smith said.