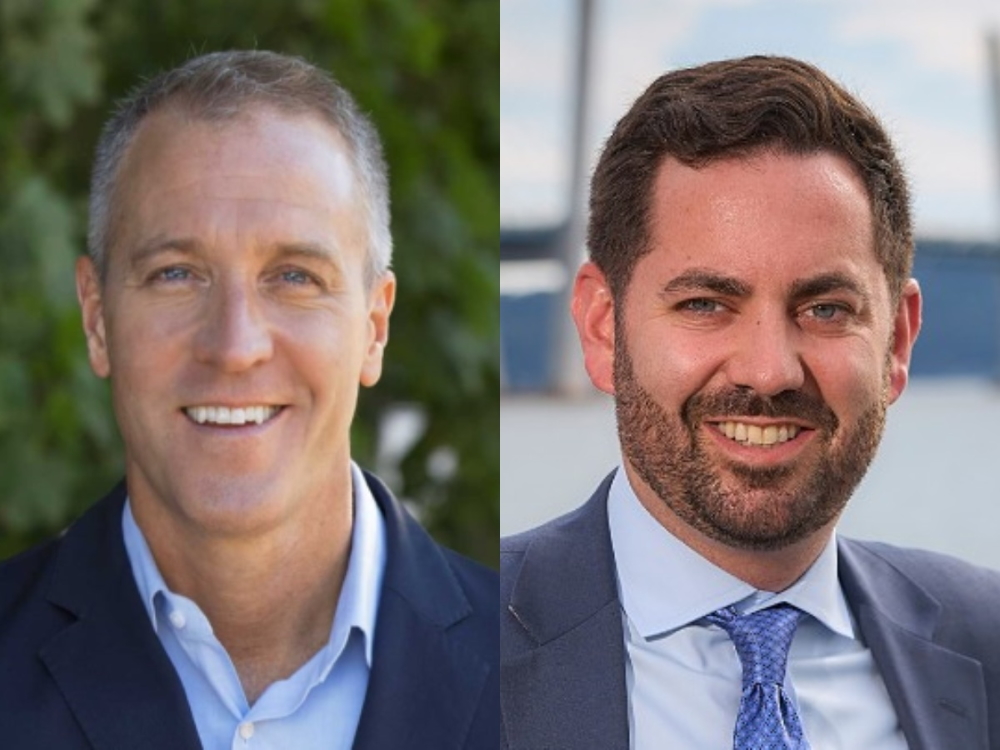 The newly drawn Congressional District 17, which each hopes to represent come January, includes Putnam and Rockland counties and parts of Westchester and Dutchess. The political analysis site FiveThirtyEight projects Maloney as slightly favored to win the seat.

Initially elected in 2012, Maloney, a Democrat who lives in Philipstown, seeks his sixth term. Along with serving in the House, he chairs the Democratic Congressional Campaign Committee, assigned to preserve the House’s slim Democratic majority.

Lawler, a Republican from Rockland County, won his Assembly post in 2020 over a longtime Democratic member. He was the deputy town supervisor of Orangetown at the time and is a partner in Checkmate Strategies, a lobbying firm. He is also a former assistant to the county executive in Westchester and former executive director of the New York Republican State Committee. 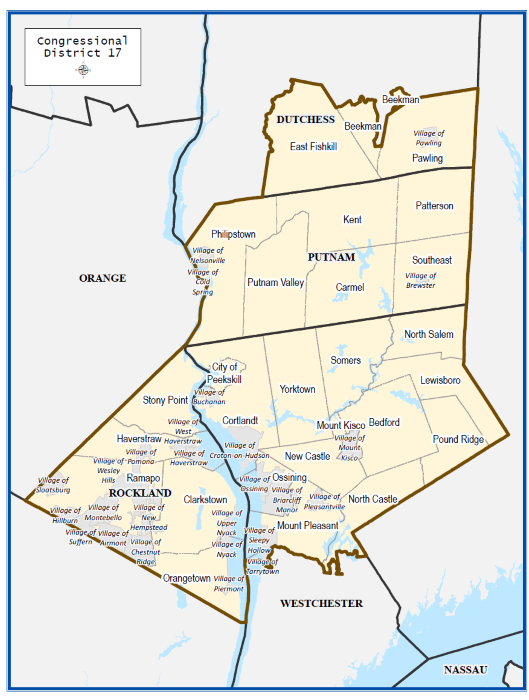 The candidates participated in online debates sponsored by the League of Women Voters and the NAACP last month and also have sparred through news releases.

The intensity of the fight colored both debates, whose moderators issued warnings against incivility, with mixed success. During the NAACP event, after several interruptions by Lawler, who cautioned the NAACP to “not allow smears,” the moderator cut off Lawler’s audio, although Maloney asked that it be restored because “it’s good that everybody see that he won’t play by the rules.” At the Oct. 12 debate, Lawler criticized the League of Women Voters for tolerating a “ridiculous personal attack” from Maloney.

At both debates, Lawler repeatedly claimed that Maloney lies. Maloney, in turn, alleged that Lawler wants to “hide” his own views and “shout me down.”

Each has portrayed the election as a choice between the mainstream and extreme.

“That’s the MAGA way,” Maloney said. “The difference between mainstream and MAGA is mainstream people know it’s wrong to try to whip up racial tension and go back to mass incarceration, which, I guess, is your plan,” he told Lawler.

“Some of us think that we can have a fair system where we treat rich and poor people the same. Keep dangerous people behind bars, of course” and “support good policing,” which can reduce crime, Maloney proposed, noting that he has obtained $7 million in federal funds for police departments in the Hudson Valley and promoted the Invest to Protect Act, passed by the House to underwrite “good, accountable policing at the local level.”

Declaring that “they’re not my flyers,” Lawler blamed a super PAC, or political action committee, for distributing them. The PAC was the Congressional Leadership Fund, a group that promotes the election of Republicans to the House.

“I cannot legally coordinate with a super PAC” and “have no idea what went into deciding how to send out any mail,” Lawler said. Furthermore, he continued, “what is offensive, and what should be offensive to everyone, is the rapid increase in crime across our state. Black and brown people are being victimized by the very cashless bail law that is releasing dangerous criminals regardless of their race.” He added that while Maloney “can dismiss this and try to make this about race, this is about crime.” 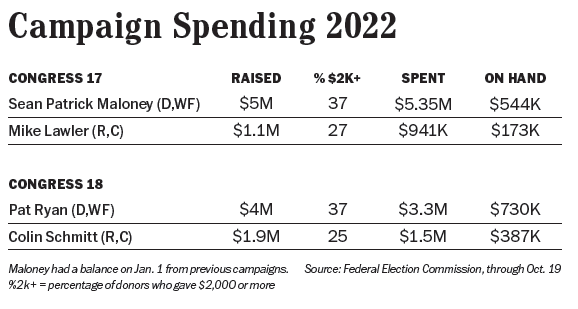 Lawler also castigated Maloney for his role with the DCCC, which has spent money to buoy what it considered weak Republican candidates in primaries. “You keep talking about MAGA, MAGA, MAGA,” but “the only one that was involved in electing MAGA Republicans this year was you,” Lawler said Oct. 12.

Last week, in a news release that included a cartoon figure of a man in prison garb running with a bag of money, Lawler derided Maloney as a “self-dealing” guy who “raids DCCC funds of $600,000 for his own faltering campaign.”

On Oct. 27, in discussing their differences on abortion, Lawler declared that “the only extremist in this race is Sean Patrick Maloney. He voted for a bill that would expand abortion nationwide up until the moment of birth” and facilitate abortion in other ways. “That is extreme.” (Maloney voted in July for the Women’s Health Protection Act, which codifies abortion rights into federal law.)

Maloney maintained that Lawler “thinks states can ban it [abortion] for any reason, or no reason at all. It’s wrong.” Moreover, he said during the NAACP debate, a Republican majority in Congress could outlaw abortion nationwide. At one point, “my opponent said that makes sense,” but “now he says: ‘I don’t support it,” Maloney said. “He’s been all over the map on it. You can’t trust him.”

Lawler told the NAACP that “I am personally pro-life” and, with regard to restrictions, “do believe in exceptions — I always have — for rape, incest, the health and the life of the mother. I am also against the national ban on abortion, despite his [Maloney’s] repeated lies on the matter.”

In the League of Women Voters debate, Lawler said that he is “proud of my record with respect to common-sense, bipartisan gun safety measures. Unlike my opponent, I have defended the right of law-abiding citizens to exercise their Second Amendment rights while taking on the criminals who use guns in the commission of crimes.”

He said he also supports universal background checks and efforts to “harden our schools” against gun violence. But, he said, “the reality is this: If we want to address gun violence, then we need to start by going after criminals.”

Maloney, who has been endorsed by gun-control advocates, responded that “this guy is in the pocket of the NRA [National Rifle Association] and has voted against every important gun-safety legislation that comes his way,” including a state law passed this year that raises from 18 to 21 the legal age to buy semi-automatic rifles.

Maloney advised the nation to “listen to our police who say they need help with these weapons of war in getting these guns off the street.” On Oct. 27, he further observed that Democrats in Congress are going “after gun violence, passing the first gun-safety legislation in almost 30 years.” 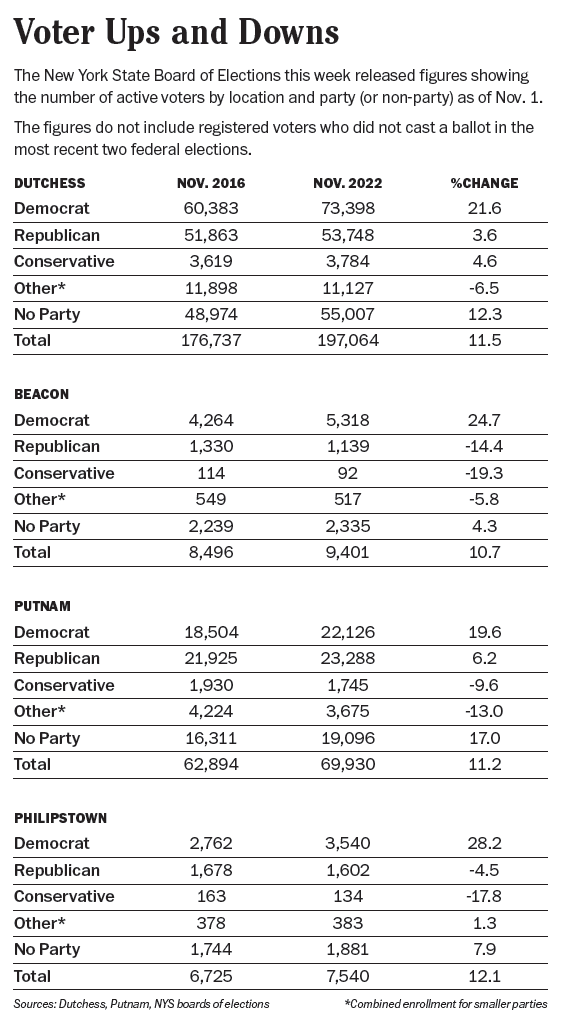 In explaining their reasons for running, Lawler and Maloney mentioned concerns about the economy and their intentions of assisting hard-pressed Americans.

“One-party rule has failed us,” Lawler said Oct. 27. “Democrats control everything in Washington, Albany and New York City at the same time, and they’ve created a mess,” including “a 41-year record high on inflation, surging crime in New York City and across our state, skyrocketing energy prices, grocery bills, home heating and a porous southern border, with not just a massive inflow of illegal immigration and human trafficking but drugs coming into our communities, killing 300 Americans a day. And nothing is being done about it. We need to restore balance and common sense to every level of government.”

Congress needs “people willing to deal with these issues,” Lawler said. “My opponent has failed to do that. And he says he’s mainstream but has an extreme voting record, one of the least bipartisan in Congress.” He argued for a move “in the right direction” because “people are concerned about their future, about the future for their children. That’s what this campaign is about. Not the smears, not the lies,” from Maloney, who, he said, “can’t defend his record.”

More than half of Republicans running for Congressional and state offices in the midterm elections can be classified as “election deniers,” according to an analysis by The Washington Post. The list includes seven candidates for Congress in New York state and Lee Zeldin, the Republican gubernatorial hopeful.

The Post included candidates on the list if they (1) directly questioned the victory by President Joe Biden in 2020, (2) opposed the counting of Biden’s electoral college votes, (3) expressed support for a partisan post-election ballot review, (4) signed onto a lawsuit seeking to overturn the 2020 result or (5) attended or expressed support for the rally on the day of the Jan. 6 attack on the U.S. Capitol.

Mike Lawler, the Republican candidate for District 17, was asked last week by The New York Times if he believed Biden had won legitimately and responded, “Yes.” In a debate with Maloney on Oct. 12, he said, “I oppose Jan. 6, and Joe Biden did win.”

Nonetheless, Maloney defended his record. “I work with Republicans all the time — that’s how I banned oil barge anchorages on the Hudson River,” he said. To cut fuel costs, he said he backed releasing fuel from the national Strategic Petroleum Reserve, which “brought it down $1.30 a gallon. We’ve got more to do, but that’s a real plan. Groceries: We can get prices down by fixing our supply chains; we have a plan to do it,” he said. Maloney said he supports the Affordable Care Act and the “Obamacare” national health program, but “my opponent does not.”

Democrats in Congress are also lowering premiums for health program participants and “capped out-of-pocket costs in Medicare,” which he termed “a big deal, if you’re a senior and your Social Security payment can go up and your Medicare premium can go down.” But Lawler and the Republican Party “opposed taking on the big drug companies because they’re bankrolling his campaign,” Maloney claimed. “You have a choice between mainstream and MAGA. I’m the mainstream candidate.”

2 thoughts on “The Race for Congress: District 17 (Philipstown)”