Support, but also doubts, about initiative

Trimble, who coordinates Philipstown Hometown Heroes, a grassroots organization behind the initiative, appeared before the Cold Spring Village Board at its Wednesday (Dec. 7) meeting.

Trimble advocates placing banners throughout Philipstown, as well as on Route 301 west of Route 9 and along Main Street to the Hudson River. 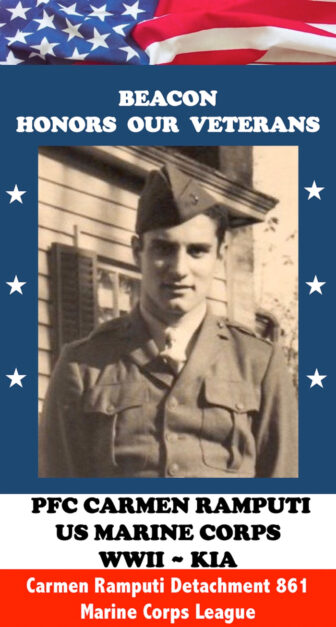 The Daughters of the American Revolution installs banners in Beacon from Memorial Day through Veterans Day.

The banners are 5 feet high and 21/2 feet wide, she told the board. Printed on both sides, each could honor two veterans and include their names, photos and military service. They would be in place from before Memorial Day in late May until after Veterans Day on Nov. 11, then stored by each sponsor through the winter. Each banner costs $250 and would be paid for by a family member, business or local organization.

Similar initiatives have been launched in many parts of the state and country, including Beacon, Kingston, East Fishkill and Wappingers Falls.

Cold Spring Mayor Kathleen Foley told Trimble that she would need to submit an application and formal proposal for the board to consider the idea.

Foley said the policy recently adopted by the village prohibiting flags and banners other than the U.S., POW/MIA and New York State flags applies only to village- owned properties. The banners would be mounted on poles owned by Central Hudson. However, Foley said the project may require approval from the Historic District Review Board and Zoning Board of Appeals before trustees could vote.

The Village Code prohibits anything that extends more than 12 inches from poles into the right-of-way. For that reason, the 30-inch-wide banners would likely require a zoning variance.

In addition, Main Street in Cold Spring is part of a national historic district.

“That is one of the concerns I have,” Foley said, noting that 5-foot-high banners would be “a big visual presence” on Main Street.

“I intend to comply with everything, follow all the rules,” Trimble said.

Foley said Trimble’s best option may be to only place banners outside village limits, “where you are only dealing with the county or the state rather than the local ordinances.”

During the public comment period of the meeting, the reaction was split. Several residents grew emotional in their support for the project, while others questioned the initiative as proposed and whether it is the best way to honor veterans.

Rick Peterson suggested that George Casey, a World War I veteran for whom the American Legion post is named, should be the first person honored.

Lou Leonardi, who lives in Philipstown, said he “would be insulted if the village does not allow these banners.”

Margaret Schatzle added: “This is a way to celebrate, to honor our veterans; we have freedoms because of them. I would hope the village would even waive the zoning” requirements.

Others qualified their support.

“I agree veterans should be honored; I’m not sure having banners up for seven months is a meaningful way to do that,” said Celia Barbour, a Garrison resident, adding that after the banners are up for a while, people pay less attention to them.

Heidi Wendel of Nelsonville said having the banners up from Memorial Day to the Fourth of July would be “fabulous,” but that displaying them  for extended periods “can give an impression of militarism in our civil society,” a view she said is shared by veterans in her family.

Robert Cutler, from Garrison, said he thought the banners were “a terrific idea” but suggested that “less is more,” encouraging organizers to have them up only two months during the year.

Garrison resident Carol Marquand questioned the fairness of the proposal because, she said, it limits the veterans honored to those whose families or sponsors can afford the $250 fee.

In other business, the board …

We reported that the proposal to hang banners honoring veterans from utility poles in Cold Spring “may require approval from the Historical District Review Board and Zoning Board of Appeals before trustees could vote.” According to Mayor Kathleen Foley, she would issue the permit at her discretion and it does not require a vote or review by any boards.

“Although this discretion is mine under the current code, I respect our local land use laws and the due process that the building permit application process allows,” she said. “I would, therefore, take guidance from our land use boards. The process for Ms. Trimble to follow is to submit a building permit. She has not yet done so, so there is no determination to be made at this stage.

“If an application were to be received, the code enforcement officer would review it for compliance with our zoning code (134-18) and our historic district ordinance (§ 64-11). If the code enforcement officer determined that referrals to those boards were required, I would take guidance from the decisions of those boards before taking any decision. Additionally, Ms. Trimble would need to demonstrate approval from Central Hudson, owner of the poles, as well as the state Department of Transportation, if appropriate.”