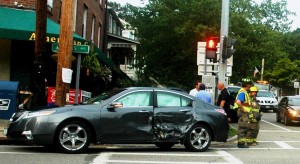 Occurring around 7 p.m. at the site of the village’s sole traffic light, the incident drew a fire truck, police officers and the attention of diners at Whistling Willie’s restaurant.

Flares cautioned oncoming traffic as wreckers arrived to carry off the damaged autos.  Cold Spring Fire Company Captain Matt Steltz told Philipstown.info that the accident luckily involved “nothing serious; a little traffic for us,” as firefighters helped guide other vehicles through the intersection. He said the fire company might have more information in a day or two. 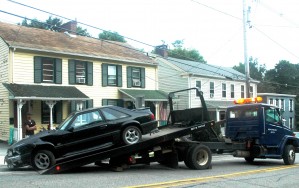 One of two vehicles gets loaded onto the wrecker

A diner at Whistling Willie’s said one person in one of the damaged cars reportedly was taken to the hospital complaining of neck pains.