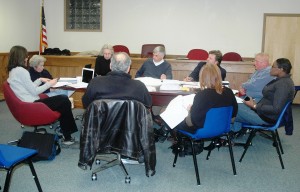 Special Board votes to send plan to village board

Several months ago, Mike Armstrong, Chairman of the Special Board that has been drafting a new Comprehensive Plan for the Village of Cold Spring, was asked at a meeting if a consensus among board members was needed in order to recommend a new plan to village trustees. Armstrong replied that consensus could be difficult to achieve and that only a simple majority vote in favor would be required. That is exactly what happened at the Special Board’s meeting on Dec. 9, 2010.  As the vote on a motion to recommend the plan worked its way around the table, board members Anne Impellizzeri, Armstrong and Michael Reisman each voted in favor. Anthony Phillips, Catharine Square, Cathryn Fadde and Marshall Mermell each in turn voted “no.” Karen Doyle voted “yes” leaving Marie Early to cast the deciding vote. When she said “yes” the deed was done.  By a five to four margin, a plan that has been more than four years in the making is now on its way to the Village Board which will be responsible for formally adopting or revising the plan – as well as deciding how and when to implement the plan’s recommendations. Ultimately, all land use regulations in the village must be brought into compliance with the Comprehensive Plan – including the village zoning code.

Much contention among Special Board members

While the motion to recommend the plan to the village was made early in the meeting — appropriately enough by Marie Early — the actual vote was not taken until much later.  After Early made her motion, Mermell moved an amendment which would have delayed the vote until a meeting scheduled for Jan.13, 2011. He argued that he hadn’t had an opportunity to review the final revisions. “I respectfully request that we have a good discussion tonight — but no vote. There are some really substantial issues to be addressed. This is where the rubber meets the road.”

Early responded that the final changes were the result of a series of meetings held with members of the Special Board, “over the past five days. I think everyone has seen the wording for all final changes.” Impellizzeri agreed, saying, “This isn’t new information.”

Reisman also objected to the idea of a postponement. “We’ve discussed every single change since Sept. 29. We’ve all seen the changes – I don’t think it’s true we haven’t had opportunity to review.”

When Mermell repeated that he wanted more time to review changes, he commented to Reisman that “I’m not like you — deciding things off the cuff.” Reisman bristled and shot back, “I object to that characterization.”

Not everyone was opposed to a delay, however. Square supported Mermell. “I have a lot of concerns – I’m not comfortable. If you want to put a vote on the table, fine. You can say we discussed everything here but we haven’t. Is it going to kill us to wait three weeks?” Doyle disagreed. “All the changes sent out yesterday and today were the result of prior meetings and a majority was in favor of the changes.”

When the question was called, Mermell’s amendment was defeated 5 to 4, following the same voting pattern that later in the meeting would recommend the plan to the village.

The bulk of the meeting consisted of a reading of the final revisions by Impellizzeri, vice chair of the Special Board. Most changes were accepted without comment; however, some issues prompted a final discussion. A provision dealing with the treatment of religious properties was deleted in part because it duplicated federal law. Mermell also pointed out that case law on the issue is not completely settled.

The plan recommends that a Comprehensive Plan Advisory Committee (CPAC) be established to implement the plan in consultation with the Planning Board and Zoning Board of Appeals. Phillips commented that he felt it is important that members of the new committee be familiar with the planning process and suggested that the plan include suggested qualifications for serving on CPAC. It was decided to recommend that CPAC consist of members drawn from the Special Board, working groups that contributed to the plan and others familiar with the process.

A recommendation that the village be referred to as Cold Spring on Hudson for marketing purposes was deleted due to fairly widespread opposition to the idea.

Mermell and Square voiced concerns over a recommendation that a Land Conservation District be established. Mermell questioned where such a district would be located and wanted to know the pros and cons of establishing one. Square said that language used in that section and “throughout this whole document is inconsistent and ambiguous. That disturbs me.”  The recommendation was left intact, Armstrong stating that the recommendation is to “consider” establishing such a district, leaving room for further research. Reisman added that conservation easements, a tool frequently used in land conservation districts, “are voluntary and not restricting to landowners.” Other recommendations prompting discussion dealt with the possibility of establishing a utility tax based on usage, condominium development, “special properties,” and form-based zoning.

Once the vote had been taken to recommend the plan to the village, Armstrong read aloud a covering letter that will also go to village trustees. The letter included a statement that the plan represented “broad agreement.” Mermell objected to use of that term and suggested instead that the letter include the fact that the plan had been recommended by a vote of 5 to 4. In the end “broad agreement” was deleted.

The plan itself wasn’t the only issue to cause friction at the meeting. At the outset Armstrong reported on two requests that the village had received under the Freedom of Information Law (FOIL). One was granted routinely; a request for correspondence on the status of funding for the Local Waterfront Revitalization Plan (LWRP). The second proved more troublesome — a request for a Special Board spreadsheet outlining the dozens of possible revisions to the draft Comprehensive Plan — which Armstrong said was also granted by the Village Board. Anthony Phillips reacted: “Why did they grant that? I object. You’re the chairman — why didn’t you object?”

Armstrong replied that he had objected strongly and that the village attorney had supported his view that the request not be granted on the basis that the spreadsheet was “intra-agency correspondence,” However when the applicant appealed, the village board granted the request, on a 3-to-2 vote. “They felt it was the right thing to do,” Armstrong said of the Village Board members in the majority. That didn’t satisfy Phillips. “If this continues why are we even here?” he asked. “Every time this [village] administration doesn’t like this board’s decision they just overrule it.”

Two residents, Sue Peehl and James Hartford, spoke at the end of the meeting and thanked the Special Board members for their time and effort. “You may not feel that you agree — but I have seen a lot of agreement,” Hartford said.

After the meeting Square still voiced her concerns. “There’s no way this plan was ready to go to the Village Board. It’s only about 30 percent,” she said. Armstrong was upbeat. “This is fantastic. It’s a home run. You can’t shy away from conflict and differing opinions. I think what we’ve accomplished is wonderful.”

Residents will still have the opportunity to comment on the recommended Comprehensive Plan.  Once the village trustees receive it they must hold their own public hearing before adopting or revising the plan. The entire Comprehensive Plan as recommended by the Special Board is available Here.


The Special Board remains intact and will now devote its attention to completing the Local Waterfront Revitalization Plan (LWRP).