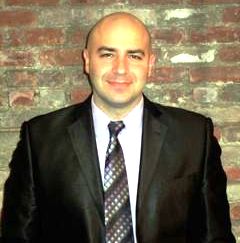 Pace will be all smiles if he lands the role (Photo by A. Rooney)

“There is no reversing the process. You will die a soulless, paper thin copy, unloved in life, unmourned in death, and forgotten faster that you ever lived.”

Oh boy, wouldn’t it be fun to say those lines with just the right mix of menace and relish?  That dialogue belongs to one of those fabulous arch-villains, Lex Luthor, a character that Cold Spring actor Dominic Pace is aching to portray in the next entry in the Superman movie franchise. “Everyone has their career role, and this, for me, would be it,” says Pace, who, despite his lack of celebrity, has had a steady run of small parts on television for over a decade now, and is campaigning for the part via social media and by trying to win over devotees of the Superman comics themselves. In an online quest worthy of a superhero, Pace is trying to break through the ranks of those with more “name value” to be considered for the role.
Pace, who grew up in Ossining, moved to Cold Spring with his family last year, after a long stretch in Los Angeles.  He is thrilled to be here, and has found the community incredibly welcoming.  At 35, he has taken the plunge to move back east, to improve the quality of life for his family, at the possible expense of the steadier flow of more lucrative television jobs on tap in Los Angeles.  He followed his mother and his sister to Cold Spring.
It’s been a long trajectory.  Pace became hooked on acting in high school, when he was cast in the lead in Grease (Grease is to be performed at Haldane High School in a few months).  A strapping 6’3″, he had primarily concentrated on athletics until that point, but the electricity he felt performing on stage was “second to none, so by senior year I started chipping away at sports.  I went to Marist for a year, but I took acting classes in New York City and that is what I was meant to do.”  Studying at the Actors’ Studio, Pace got a few early breaks, appearing in Tony ‘n Tina’s Wedding and then was flown to Singapore to shoot an independent film, That’s The Way I Like It, (a take-off on Saturday Night Fever), in which he played a guardian angel.  Nope, no wings, but instead “this whole vinyl suit thing in 100-degree weather!”  Further small film roles followed, including the wonderful experience of playing pretend baseball at Yankee Stadium with Kevin Costner, in For the Love of the Game, an experience made more sweet because he was able to bring his grandfather (whose passing last year was one of the reasons for the move back east) on the field with him. 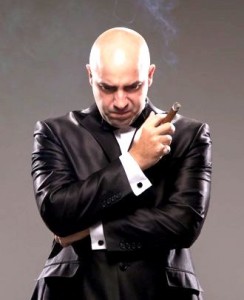 “Doesn’t it give you kind of a, a, a… shudder… of electricity through you to be in the same room with me?”  (More Lex Luthor)

In 1998, he and his fiancí©e, now wife, Geraldine took the plunge and moved to Los Angeles, working separate shifts, trying to keep the income flowing and the auditions going. More roles followed: Little Kings, “three Italian brothers—I was in love with my brother’s wife”—which landed on the film festival circuit and lots of bit parts on television shows including Strong Medicine and Young and the Restless. Lots of thugs and hoods. Represented by an old-school talent manager, Bud Moss, Pace finally broke through to a larger guest starring spot, on NYPD Blue.  On this one it was his brother who was cheating on his wife with a transvestite and wound up murdering her.  The two brothers owned a gym together and the non-murderous brother vouched for the murdering brother.  In a big, heated, interrogation scene the non-perp brother was broken down by two cops threatening him over his sick mother.  “Stop lying or we’ll send you away and no one will take care of your poor old ma.”  Yep, he spilled the beans.
It then became a succession of tough guys and bouncers and Pace did pretty well, but all of the characters were one-dimensional.  There was Desperate Housewives, where his scene almost got cut, and Prison Break, where he got to go 70mph in a Range Rover and have a cops and robbers thing going.  To augment his living as an actor, Pace had a second career in restaurant management, running the Geisha House, which was a Copacabana-like club filled with starlets. In 2005 the first of his two sons was born, and everything changed; he was no longer able to take month off to do an independent film, for example.  He had to become a provider.

Because if any human being were going to perpetrate such a fantastic hoax, it would’ve been me!

After 12 years of living in Los Angeles, and a “wonderful agent, Brianna Barkus,” Pace felt he had hit a plateau. Although making a living, he was frustrated by never being able to crack the inner circle.  He had accomplished his dream, and now he wanted to focus on family, and wanted his mother to be around his children.  His mother “kept bragging about Cold Spring.”  His sister, Dina is “active in the community.”  A visit to Cold Spring convinced him that this was the type of environment he wanted his children to grow up in. “Yes, my career might go on the back burner, but life in Cold Spring is wonderful.  My kids went caroling at Christmas.  Parrott Street Halloween is amazing.  You can have your 72 and sunny all the time.  Life is cyclical; winter is the time for reflection.”  Pace and his wife have committed to at least a year in Cold Spring, and if they can make it work here, they will stay on.
Since moving to Cold Spring, Pace has felt very fortunate to have found work in two local establishments, Hudson House and Cathryn’s.  He is full of praise for his employers, Sam and Regina Mei and Cathryn Fadde, respectively, for being so supportive of his career and giving him great flexibility with his hours.  He has been amazed by the friendliness of the clientele at each. “Everyone I’ve met has been so genuine, respecting you for who you are instead of what you do. There’s no attitude—you feel at home in both places—such a great experience.”  By the way, he especially recommends the burgers, steaks and chops and the creamy lobster bisque from chef John Guerrero at Hudson House, and the “pastas to die for”¦and the lamb patties with goat cheese appetizers and the sautí©ed calamari with the cherry tomato sauce and the amazing wine line which changes monthly” at Cathryn’s.  On top of everything Cathryn has come up with a new drink, the “kryptonite martini” which will be on the bar menu until the role of Lex Luthor is cast. 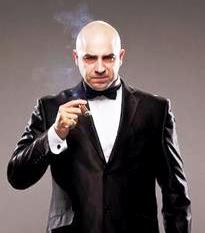 “To us, they are just meteorites. Fair enough. But the level of specific radioactivity is so high, to anyone from the planet Krypton, this substance is lethal!”

So, what draws him to the role of Lex Luthor? Apart from the physical resemblance, shown to great effect in images from a photo shoot from last year, Pace says that Luthor is “A perfect balance, menacing undertones; you keep all that power internal. So many things are going on internally inside of me. Sometimes the public can relate to the villain more than the hero. There are so many of life’s experiences I can share with an audience.” More than anything, Pace is ready. “I don’t believe that with anything in life you need to hang your head low. Once or twice a year I get reminded of what I studied in the first place, and I get a re-awakening of that experience. My mother was so supportive of never letting us take a back seat. It’s a beautiful thing “¦ as artists we’re so afraid, and you just can’t be.”
With new producers and a new director at the helm of the next Superman, Pace is hoping that a new Lex Luthor will be just the ticket. He has created a Facebook page to generate support and has reached out to a number of comic book websites as well, trying to create a groundswell.
Here’s hoping that he’ll be able to say those magic words: “Otis, take the gentleman’s cape.”  Or something to that effect.
In the meantime, stop by at Hudson House or Cathryn’s to say hello. For more information on Dominic Pace, visit www.imdb.com/name/nm0655124/.