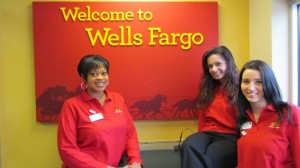 The staff dressed for the occasion on Saturday March 12 when the former Wachovia Bank in Cold Spring officially became a Wells Fargo bank. While many people think of Wells Fargo as a western company because of its iconic 19th century stagecoaches, it was actually established in New York City in 1852. It was the first national bank charter granted by the United States Congress. One hundred and forty two years later, in 1995, it became the first bank to offer online account access to its customers. Wells Fargo has maintained the stagecoach as part of its image and even the bank’s sign in FoodTown Plaza has a distinctly western feel to it.