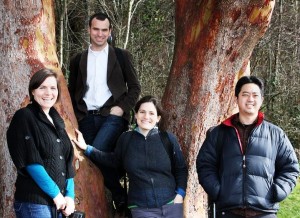 String quartets are perennially popular at the Howland Chamber Music Circle, and audiences will surely be receptive to a visit from the Jupiter String Quartet. The Quartet, formed in 2001 is an intimate group, consisting of violinists Nelson Lee and Megan Freivogel, violist Liz Freivogel (older sister of Meg), and cellist Daniel McDonough (husband of Meg).The Jupiter Quartet concertizes across the Americas, Europe and Asia. Performances at Carnegie Hall and Lincoln Center and at several major music festivals including Caramoor have been very well received. In 2008 they were awarded an Avery Fisher Career Grant and in 2007, they were given the Cleveland Quartet Award from Chamber Music America. Their career began to take off after being selected in the Young Concert Artists International Auditions in 2005 and subsequently winning in the Banff and Fischkoff competitions.
For its concert at the Howland Center the quartet has chosen to play Robert Schumann’s Quartet in A Major, Op. 41, No. 3 and “Hommaga a Mihaly Andras” 12 Microludes, Op. 13 by Gyorgy Kurtag. They will be joined by clarinetist Jose Franch-Ballester in Mozart’s Quintet in A Major, K. 581.
A native of Spain, Jose Franch-Ballester received the highly coveted Avery Fisher Career Grant in 2008, and in 2007 he was one of a handful of participants selected for a Carnegie Hall Professional Training Workshop with Emmanuel Ax and Richard Stolzman, and one of the year’s “most prominent emerging soloists” as selected by the American Symphony League magazine. He has played in many major halls throughout the United States, Europe, Japan and Korea and is in demand at numerous festivals. He will also play at the Howland Center’s “Classics for Kids” and conduct a master class on Saturday, April 9.
The concert will take place on Sunday, April 10, at 4 p.m. at the Howland Cultural Center, 477 Main Street, Beacon and will be followed by a reception to meet the artists. Tickets are $30 ($10 for Students) and can be reserved by calling 297-9243. For further information visit www.howlandmusic.org
Photo courtesy of Howland Chamber Music Circle.