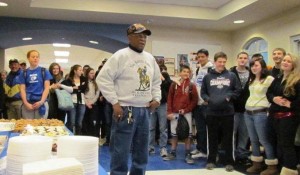 Haldane High School students, administration, teachers and support staff packed the school lobby earlier this week to honor Sanders “Matty” Matthews, a custodian at the school. Sanders, who turns ninety on April 8, has worked at Haldane for the past six years and in that time has earned the affection of virtually everyone in the school. That affection was palpable as everyone in the standing-room only lobby sang a rousing “Happy Birthday” to a very surprised Matthews. Malachy Cleary, president of the Haldane High School Student Council presented Matthews with an engraved pocket watch. “He’s an incredibly unique individual,” Cleary said. “We wanted to honor him for his service to his country.”
Matthews served as a “Buffalo Soldier” and fought in Germany during the Second World War. The term was given to African-American units that were formed as part of the U.S. military. Although the origin of the name is not certain many believe it was coined by Native Americans who fought against the Buffalo Soldiers during the Indian Wars. The first all-black regiment was formed in 1866 and the last units were disbanded in the 1950s when U.S. military services were integrated. According to Matthews, of the forty- to fifty-thousand Buffalo Soldiers who served during the Second World War, only about one hundred are still alive today.
Matthews was taken completely by surprise and was visibly moved by the celebration. “I’m shaken. I can hardly stand up,” he said. “I didn’t know a thing about this. Haldane can sure keep a secret! I feel overwhelmed.” Wearing his trademark Buffalo Soldier sweatshirt, Matthews cut his birthday cake while in the background the Haldane Blues Devils belted out Bob Marley’s song Buffalo Soldier. “He wears a Buffalo Soldier sweatshirt every day,” Cleary said. “And even his pickup truck has a Buffalo Soldier decal on it. He’s very proud of his service.”

The event was organized by the Haldane High School Student Council.
Photo by M. Turton