Haldane’s The Admissions Game presentation brings perspective to the process

It was time to educate the parents at Haldane’s recent presentation of “The Admissions Game,” an interactive program which first spelled out some of the rationales behind the murky ‘who gets in and who doesn’t’ thicket and then put the audience behind the admissions officer’s desk, choosing between four (fictitious) candidates, each with the mix of positives and negatives of any real applicant.
The cafeteria was standing room only, filled with both parents and students listening attentively as Peter Van Buskirk, former Dean of Admission/Director of Athletics and Franklin & Marshall College (where he worked for 25 years) and self-admitted “former helicopter parent “¦ I’m sharing this information as Dean and as dad” spelled it out right away: “This should be a student-centered process and not destination oriented.” Van Buskirk urged parents to “refocus on the young person. Let the students becomes the owners of the process. Have them think about three things they want to accomplish before graduating from college.” 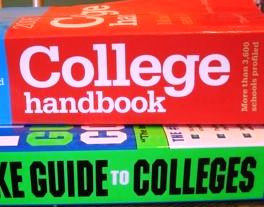 Citing his own son as an example, Van Buskirk said that a more reflective search was begun only when his son had turned an “I want action and a big city” into “I want to work in a chemistry lab where you get real hands-on experience pouring the chemicals and not just watching from afar” and “I want to continue playing the trumpet in some capacity — not my major, but it’s important to me.” Basically it is the small details which usually get overlooked which instead might be the stepping stones needed to choose successfully, remembering that getting in is just the beginning and being happy with the school chosen should be more of the goal than simply being admitted.
Turning to the nitty gritty of the selection process, a “Pyramid of Selectivity” was displayed, with the notation that this planning tool for admissions officers was used as a calculation tool to gauge the relationship between the numbers of applications received, the number of acceptances granted and the eventual enrollment. Officers must calculate the right number of students to accept in order to “yield” the class. According to Van Buskirk, colleges try to increase the gap between applications and acceptances, and they work to get as many students as possible to apply, sometimes using come-on incentives such as waiving application fees, designating “VIP” applications and other marketing tools, or “ego food — they’re recruiting your application, not you.” Stating that “bottom line, colleges now operate as businesses — the decision to admit or not is a calculated business decision,” Van Buskirk suggested that parents and students treat it similarly in the sense of really probing what this investment will yield eventually: ask about graduation rates, successes in specific areas, employer lists, grad school lists, etc. Most of all, he emphasized, “the best college will be the place that values you for what you have to offer.”
Van Buskirk feels that many students apply to too many “reach” schools in what become pointless applications. Instead, applicants should target schools that make sense, and “a slight adjustment down can make all the difference to getting scholarships.” He stressed that schools at the top of the pyramid really look at those who immediately fall within the top 25 to 30 percent of the applicants only. This is not true for schools further down the pyramid, which can take more things into consideration. What every admissions office is looking at is “not who has ‘it’ but who uses ‘it’ well.” They are looking for students who push themselves, not just academically. Calling the admissions committees “highly influenced by professors,” Van Buskirk stated that “if you have a sincere interest in a more unusual program, let it be known. Institutions want all of their programs populated.” 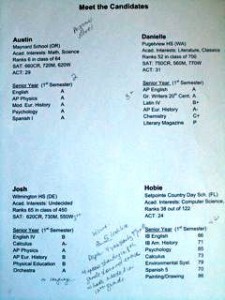 Speaking from the admissions office perspective, Van Buskirk invoked the “return on investment” strategy of “if we admit you, what will we get back? If we don’t have to invest much, we don’t have to worry about what we are likely to get.” In other words, money counts. Therefore if money is a factor, as it is for most, be certain to seek out any “need blind” stated admissions policies.
One tip offered which might not be on everyone’s radar was the importance of letting admission’s offices know, right from the start, of an interest in the school. Speaking in admissions lingo of “ghost applications” — i.e. those which seem to appear out of thin air and perplex the admissions officers, Van Burskirk told everybody to make sure every visit, even those made without a formal tour, is documented. “Get credit for coming to an information session, a college fair. Keep filling out the cards; let the colleges get to know you. Visit the campus whenever you can. Make sure you visit the admissions office itself when you do go. Find out of there is a New York recruiter. Without becoming known to the college, applicants who have good credentials sometimes wind up on the wait list because there is no real interest shown in the school and therefore the school may feel that you won’t attend if accepted.”
Other information imparted was to limit SAT/ACT tests to no more than three, as there is evidence that scores can improve between test numbers one and two, also two and three, but not beyond three. Also, there are now over 850 schools which state that they are “test-optional.” Don’t feel that if you don’t send in scores admissions will presume that you didn’t test well and if your scores are at or below the school’s average, don’t send them in and instead focus more on the rest of your application.
In relation to the essay component, aside from showing evidence of technical and artistic merit, Van Buskirk said the most important things were to “find your voice, choose a topic about which you are expert and share a part of your life that won’t be found anywhere else on your application. Let me [the admissions officer] in.” Also put a note in the application if there are any irregularities or extenuating circumstances which can be plausibly explained, (i.e. a divorce, or a reason for dropping a particular class, etc.) Admissions offices do consider the learning environment context and the home environment context, but the “student needs to tell the whole story” either through a personal statement or in an interview.
Naming “hot spots” in applications, which can make or break an admissions offer, Van Buskirk ran through a blank form and cited

“¢ Where does a student come from?
“¢ What do they indicate as their projected area of concentration?
“¢ Will they be applying for financial aid? (Be honest)
“¢ Is it a legacy application, (i.e. did immediate family members attend? This would be a tie-breaker at the least-important rung)

Using all of this knowledge of how admissions counselors weigh factors in coming to their decisions, attendees then evaluated mock-applications from four very different candidates. Each candidate’s application was put under the microscope of scrutiny. Some of the negatives dug up from one candidate or another included things which might not be evident at a quick glance:

“¢ What’s a fourth-year student doing in a first-year language course?
“¢ Why is someone who indicates he wants to study math in college taking no math in his senior year of high school?
“¢ Is this candidate an opportunistic resume-builder or is the interest in her extracurriculars real?
“¢ This student adds to the desired multi-ethnic demographic, but has he done anything to share his culture with the community?
“¢ Nice that the student is in the model-building club, but it seems there are only three members and it met just twice last year
“¢ Great athlete but she is at the Division One level which means that she probably won’t come to our Division Three school

Positives were examined as well:

“¢ He’s positioned himself as interested in the outdoors and his entire application speaks to this, from the essay to the extracurriculars
“¢ A teacher’s recommendation states that she “transformed” the school’s literary magazine, thus validating the details the student provided. Transformed being the key word here.

Each applicant’s senior year program was then given a one to five rating for toughness, as the senior year absolutely counts, and rigor is measured along with performance.
The evening concluded with an audience vote for the one of the four candidates they would admit. There was a clear winner, and runner-up, but, according to Van Buskirk, they would not necessarily be the front-runners for an admissions committee. Why the discrepancy? Money. The audience voted without taking into account the fact that the winner would need a full aid package. A sobering, realistic end to an informative presentation.
Photos by A. Rooney