Forget the recent spate of cloudy, dreary weather. There was a star-studded evening in Cold Spring on Tuesday May 17, 2011 as Haldane High School took a page from the award show playbook as it honored the school’s arts community at the first ever An Evening of Rising Stars.  The evening was hosted by the Fine Arts Committee, with honors handed out to students in several categories: Visual Arts, Choral, Instrumental, Rock ‘N Roll & Song Writing, Creative Writing, Musical Theater, Drama and Behind the Scenes. Close to 60 students were nominated. Winners and nominees in each category received a Haldane STAR and certificate. 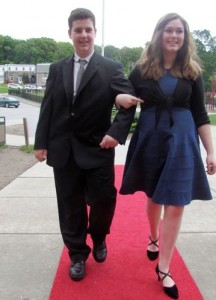 In his opening remarks, Superintendent Mark Villanti said “If we don’t feed the creative arts”¦we are not doing our job” and before presenting awards in the Visual Arts category School Board president Dave Merandy said “This evening has been a long time coming.” Villanti, Merandy and others were decked out in their tuxedos. Students, parents, teachers and administration were also “dressed to the nines.” A video featuring highlights from the year’s arts-related events included “home grown music” written and performed by Haldane musicians. Seniors Tess Dul and Chrissy Glorius acted as MCs. Hearty applause and spontaneous cheers greeted award recipients as they took the stage. It was a first time event and certainly a feel good event – one that will undoubtedly become an annual Haldane tradition.

Behind the Scenes
Most Accomplished: Anna Ledwith and Thomas Geithner