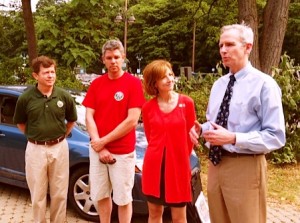 Congresswoman Nan Hayworth (R-19th), whose district includes Philipstown, visited the Cold Spring waterfront on Friday June 10th as part of a tour of sites owned by the land preservation group Scenic Hudson.  Escorted by Scenic Hudson President Ned Sullivan, Hayworth came first to the Foundry Dock Park on the river opposite the Metro-North train station. Cold Spring Mayor Seth Gallagher and Andy Chmar, executive director of the Hudson Highlands Land Trust (HHLT,) joined Hayworth there. The park, once the site for the 19th century Foundry’s shipping operation, provides both quiet places for contemplation and an active location for launching watercraft onto the river.
“The theme of the day is how the environment and economy come together and create an incredible quality of life and jobs in the Hudson Valley,” said Sullivan who asserted that land preservation and riverfront revitalization have created hundreds of jobs in the region. “We are thrilled that the Congresswoman has emerged as a leader in Congress in bringing together these two goals of protecting our environment and restoring our economy,” he said.  Specifically, Sullivan thanked Hayworth for her sponsorship of the Highlands Conservation Act, which authorizes federal money to match funds raised by Scenic Hudson and the HHLT for land acquisition and preservation. Sullivan said Hayworth was also supporting an effort to make permanent the tax benefits associated with conservation easements wherein individual property owners donate their land’s development rights to preservation organizations in return for tax breaks.
In her remarks, Hayworth emphasized that preserving land and historic heritage as well as protecting the water quality of the Hudson River had positive local and national implications.  “I am delighted to be doing some good work on the federal level to assure that Scenic Hudson and our communities here have what they need to go forward,” she said. “People come here for the beauty and the history associated with these sites. It’s really our economic engine,” said Mayor Gallagher.  He thanked the Congresswoman for her support of conservation easements, which he said were critical in Cold Spring’s efforts to protect its water supply areas.
The Congresswoman was also taken on a tour of the West Point Foundry Preserve, the 87-acre site that begins southeast of the Cold Spring train station.  Rita Shaheen, Scenic Hudson’s director of parks, briefed Hayworth on the group’s plans for protecting the preserve and developing educational exhibits on the history of the site. Throughout her visit Hayworth expressed enthusiasm for the beauty of the area as well as its history.

In a separate interview with Philipstown.info, Hayworth offered commentary on several issues important to Congress and her party.  On the debt limit and deficit reduction talks, she expressed great confidence in House leader Eric Cantor of Virginia, who is leading the Republican conference’s negotiation efforts. “Like the majority of my conference I favor a dollar-for-dollar reduction in deficit spending for every dollar we raise the debt ceiling. I think the question may become over what anticipated term do we feel the debt limit will be raised—is it six months, a year?  We would like to proceed as expeditiously as possible and get the best possible deal for the taxpayer, without raising taxes,” she said.
On the prospect of troop withdrawals from the war in Afghanistan, she said: “I am in favor of reducing our involvement in principle. I have enormous faith in General [David] Petraeus, (the current commander of military operations in Afghanistan) as a general and as the new incoming CIA Director. I think President Obama made a very good choice. He [Petraeus] understands the needs of our fighting forces. Going forward we need to do all we can with our intelligence capabilities, quiet things, with initiatives that do not involve bloodshed,” she said.
Hayworth said she did not yet favor a candidate for the Republican presidential nomination but she had met with several, including former Governors Tim Pawlenty and Mitt Romney, describing them as “having the intellect, talent and principles that I could support.”  She also noted a special relationship with former New York City Mayor Rudolph Giuliani, who has hinted about getting into the race.
Asked about her impressions of Congress versus her expectations, Hayworth said she was most struck by how much of a team effort is needed to tend to both her legislative duties in Washington and her role in the home district. “I never thought it would be so much of a team.  You have to have the best people around you and you have to empower them to do what they do best. I am more than happy to share credit for what we accomplish with the great people with whom I work,” said Hayworth.  She also said the privilege of holding the office far outweighed any frustration or fatigue with the process of government.
Finally, the Congresswoman cheerfully expressed a desire for a Republican majority in the Senate to better move her party’s agenda.  “I would also love to see President Obama’s philosophy of government aligned more with ours because I feel it’s more empowering. Hope springs eternal that the president will work more along the lines of relieving burdens,” she said.
Photo by K. Foley