Keeping cool in the shade of the trees which grace the front of Butterfield Library on Chestnut Street, a group of Philipstown kids conjured up the rarely-sweltering Vikings as they participated in “Scandinavia Week,” the theme of the second of three sessions of “Summer Fun at the Library” camp. 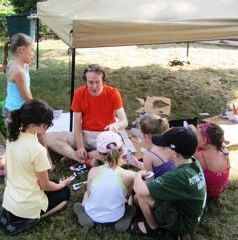 Robert Appleton guides the kids in the day's activities

Taking off on the Summer Reading Theme (set by New York state) of “One World, Many Stories” this free program, which runs Monday through Thursday mornings, takes kids around the world through crafts, games, activities and stories.  This year, a grant from RBC The Morton McGrath Group has allowed 20 children to participate each session, up from 10 to 15 in previous years.  Open to Philipstown residents only, first to sixth grades, the program runs from 9 a.m. until noon.
The first week’s focus was on Africa.  Crafts included masks, drums and beading.  An African drumming and dance program featured Elena Mosley.  Shifting gears, the Scandinavian activities included felting projects, trolls and making Viking finger puppets and the ships on which to place them.  Educator Robert Appleton was on hand to help the children cut out and decorate the puppets.  Seated under a tent on the Library’s sloping lawn, he was the hub of many spokes, calmly taking time with each child to offer suggestions and approval.  At his once- 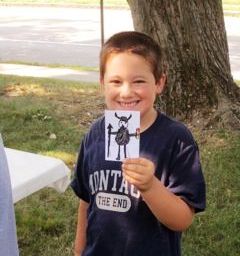 a-session visit during Africa week he helped the children make drums that they then used to perform with the African drummer. This week’s special guest was scheduled to be Jason Edwards, creating a story play with the younger kids and conducting a library orienteering program with the older ones.
A camper named Patrick told Philipstown.info that he was “great at building ships,” while his friend Max said he had learned a lot about Vikings: “they had armor and stuff and we just finished drawing their ships.”  Carlo, another boy, was slightly concerned, “I think our Vikings may be just a tiny bit too big for the ships.” 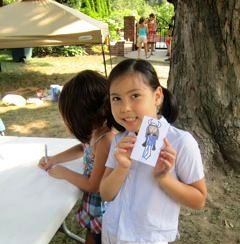 Minori's Viking is ready to sail the seas

Over at the girls’ table (established by the girls themselves, not the camp”¦) camper Minori was quite specific about the Vikings, “They were warriors. Really strong and fierce.”  Minori went on to describe some of the other fun things that went on at camp, “We had water balloon fights and Harry Potter trivia games.”
Library program staff members assisted in running the program, joined by a group of volunteers from Haldane Middle School and High School.  This week’s volunteers were Amelia Allison, Ashley Cooper and Nikki Shiga.  Other volunteers have included Grace Seward, Kiefer Thorpe and Carolyn Schippelbaum, an exchange student from Germany who studied at Haldane this past year.  The volunteers were having fun too, running around doing things like “wiping glitter off, ripping paper for papier-mí¢chí©, decorating masks, and filling water balloons. 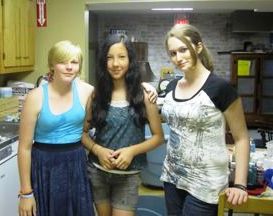 Because of demand, to accommodate as many children as possible, campers are limited to one week per season, unless there is extra space. A full Monday through Thursday commitment is required. This year there has been a waiting list for each week, but, according to Library Program Director Maureen McGrath, “a lot of the waitlist has cleared, so people should always place their child’s name on it.” The third and final week, which begins next Monday, July 25, will be South America and Mexico with Day of the Dead projects, a visit from a butterfly expert explaining the migration of the Monarch, and more. For more information, visit www.butterfieldlibrary.org.
Photos by A. Rooney