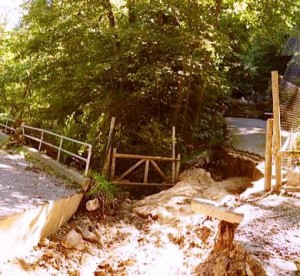 Hurricane Irene inflicted an estimated $2 million in damage on Philipstown’s roads and left many in awful, terrible  shape, Highway Superintendent Roger Chirico told Philipstown.info Tuesday morning (Aug. 30) during a break in his onsite assessment of the destruction. The situation here is that we’re in total disaster mode, Chirico said. ince I’ve been here, this is the worst I’ve ever seen it. He urged drivers to stay off many smaller roads, reserving them for use only by those who live along them and by emergency vehicles, including clean-up crews. What we’re trying to do here is limit this to the least amount of traffic, he explained. On a bit of bright news, he noted that Snake Hill Road had re-opened several hours earlier and was passable although again to be avoided.
Chirico said that he, Supervisor Richard Shea, and County Executive Paul Eldridge had been out for three days, surveying conditions. We’ve had some awful, awful washouts; terrible, he said. He added that he had contacted U.S. and New York State disaster-relief authorities as well and gotten some helpful information in particular from an official at the Federal Emergency Management Agency (FEMA.)  We’re probably in the neighborhood of $2 million in losses and costs of repairs to bridges and roads, he said. Culverts and other infrastructure need to be thoroughly checked as well, he said. In my 13 years here, I’ve never seen anything like this, not in my life.
One small bridge, on Mill Road off Route 9 near the northern end of town, was wiped out, leaving several residents on the dead end street cut off from vehicular access. Among the other roads experiencing the most damage, according to Highway Department staff, are perennial names with historic resonance and long records of damage in rainstorms. Old Albany Post Road had damage in several sections; the worst at the downhill end where rocks, dirt and debris flowed into Sprout Brook Road.  Indian Brook Road West, Philipse Brook Road, South Mountain Pass, East Mountain Road South and all had extensive damage to the roadbeds and other aspects.  Snakehill Road also had heavy damage, but town officials pointed out it is a county road.
In March 2011, both Chirico and Town Supervisor Richard Shea had described damage done to the same roads in a March 2011 rainstorm as the worst they had ever seen up until then.  (See https://highlandscurrent.org/?p=11021).  The potential expense hit to the town budget and the ongoing issue of dirt road maintenance as opposed to the town’s paved roads, which suffered little damage, is bound to surface again and perhaps spill into the election season.
Photo by K.E.Foley