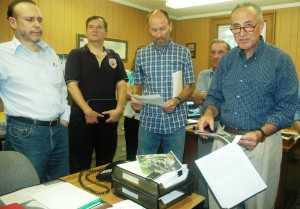 Touring wreckage left by Hurricane Irene, Sen. Charles Schumer (D-N.Y.) Monday urged storm-affected residents  to start the disaster-relief ball rolling and ensure the area gets adequate assistance by contacting local officials to report losses. “If you’ve had damage, let the county and town know; please let them know,” he emphasized, at a news conference in a flood-damaged building at the end of the tour. “I’ve never seen anything like this. The force of water and nature is incredible. To have this kind of devastation is heart-breaking.” By alerting Philipstown and county authorities, Schumer explained, the public can help make a case for a strong federal role. He pointed out that at the time of his comments, about 1:30 p.m., unlike other Hudson Valley counties Putnam County had not yet been officially declared a disaster area.  Nonetheless, “there’s very little doubt we will get relief,” he said.
Philipstown Supervisor Richard Shea has previously announced that the town government is collecting all local damage information in coordination with the county. A special informational meeting is scheduled for this Wednesday, Sept. 7 at 8 p.m. at the Town Hall, 238 Main St.  Shea has urged residents to forward damage information to the Town Clerk prior to the meeting.
The senator criticized any attempts in Congress to make dispersal of relief funds from the Federal Emergency Management Agency (FEMA) contingent upon a cut in the same amount in other federal spending. “No one should play games; absolutely not,” he said. If allocation of emergency assistance depends on paring other budget items, “you’ll have a big fight against the cuts and it [dissemination of aid] will never happen. The federal government has always stepped up to the plate in times of need, for decades and decades,” without tying aid to budget cuts, he said. To do otherwise “is just not fair,” to the individuals who suffer, he said. 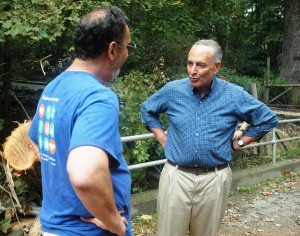 Schumer wants increased funding for FEMA, in light of the hurricane and other natural disasters across the nation over the last few months. “We need to skip the political fighting and make sure the federal government has the funds available to help communities recover,” he said. “And we need to make sure theHudsonValleygets the federal help it needs and deserves.” In a written statement distributed at the news conference, he pointed out that the Senate Appropriations Committee is about to begin consideration of the fiscal 2012 federal budget homeland security appropriations bill, which covers disaster relief spending, as well as other homeland security needs. New YorkStatealone had $1 billion in damage, under current estimates, but at present the federal disaster relief fund contains $792 million on a national basis. Schumer said he has urged FEMA Administrator W. Craig Fugate and Agriculture Secretary Thomas Vilsack to take action. The secretary of agriculture could make a separate disaster designation for the county. “The devastation here in theHudsonValleyis unimaginable and it’s clear we need the full support of the federal government to get things back on track,” Schumer said.
The senator was escorted on his tour by Shea and Putnam County Executive Paul Eldridge. Others present for the tour or preliminary briefing included Town Board members Nancy Montgomery, John Van Tassel, and Betty Budney, Town Highway Superintendent Roger Chirico,  Lynn Canton, FEMA’s Region II administrator, Thomas Lannon of the county Bureau of Emergency Services, and members of the public.  Schumer stressed the importance of obtaining aid at both the town and county governmental level and for individuals.  “We’re going to fight real hard ““- fight, fight, fight untilPutnamCountygets the assistance and the individual assistance” required, he pledged.

Before Schumer arrived at Town Hall, Canton, of FEMA, told Philipstown.info that her agency is setting up a temporary office in Albany to coordinate relief-related activities and that she had no doubts that Putnam County will be officially classified as a disaster site. She said FEMA would be surveying damage in the county Tuesday and Wednesday (Sept. 6-7). She also encouraged homeowners to contact FEMA and local and county officials to report damage and make claims.  “If you register, then you’re in the pipeline for help” if eligible, she said. To assist residents, she supplied a FEMA phone number: 1-800-621-3362. FEMA also has a website: www.FEMA.gov  [Owners of businesses that sustained damage should contact the Small Business Administration, which handles business cases.]

A mouse on a raft

Schumer conducted his news conference at the intersection of Fishkill Road and Route 9 in the ruined interior of a home-and-business occupied by Lisa Brown and her fiancé Anthony Devenuto, who runs Comfort Master, a heating and cooling firm, and their tenant, Jim Conrad, who lived in an apartment there. Brown said that she and Devenuto “saved a lot of stuff” from their wrecked property, but lost a large amount as well, and that Devenuto’s trucks and various pieces of business equipment were ruined or damaged. “I had to gut my whole house,” she said. She added that she and Devenuto were out when the storm hit and that when they got back, high water sloshed around inside. As he entered, Devenuto noticed a slipper floating by, with a passenger on board – a mouse trying to ride out the flood. Inside, on Monday their house almost appeared to be a building under construction, except for the pervasive dampness. Jim Conrad, their tenant, said that when the storm hit the water rose furiously. “I was able to get my two dogs out the front window” and escape, he said. “I’m a homeless, disabled vet now.” 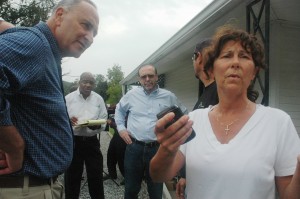 Shea told Schumer that “this entire area was flooded. All the businesses had some damage.” Earlier, in his office, he said that serious damage extended throughout the town, with creek waters washing away cars and other large items, at least one streambed being drastically re-contoured, and loss or impairment of roads and bridges. John Halebian, who has a house onMill Roadabove a washed-out bridge, said that “the creek dammed up” and came up four or five feet higher than normal. “I’ve never seen anything like this. I’m just worried about there being more rain.” Overhead, darkening skies threatened.
“You really need to see this firsthand to understand” the mess the hurricane left in Philipstown. Eldridge said during the news conference.  “We’re talking about millions and millions of dollars in damage.” At the town level, “we’re going deep into debt spending money we just do not have” to clean up, Shea said. He praised Schumer and FEMA for their outreach. “The federal government ““ they’re the ones who hold the key to this.” Along with town-government aid, he said, “we really need to get that individual assistance, to help make lives whole again.”
Photos by L. S. Armstrong