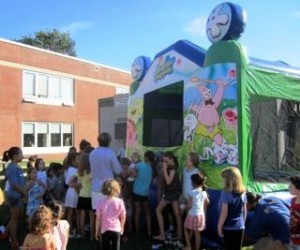 In a well-timed change of pace from yet another soggy week in Philipstown, the sun decided to make an appearance last Friday, Sept. 9 with enough notice to welcome a blacktop-filled assemblage of parents, teachers, administrators and children to the very first Haldane PTA Potluck. Designed as a cheerful introduction, mixing groups which often don’t get a chance to interact until the curriculum nights later in September, the event was originally slated to take place at Mayor’s Park, but the muddy conditions there necessitated relocation to the school grounds. 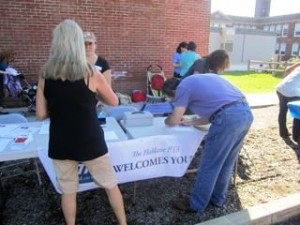 The PTA sponsored this new event.

A PTA welcome table greeted new and returning families, and platters of donated foods and beverages lay beneath tents protecting them from the sun, rather than the rain, a novelty this September. Families were invited to bring a picnic dinner and a nut-free dessert to share, with the PTA providing snacks, drinks, kid activities and entertainment. A modest entry donation was requested, with all proceeds going towards supporting the PTA’s activities throughout the year, including after-school enrichment and scholarships for students. 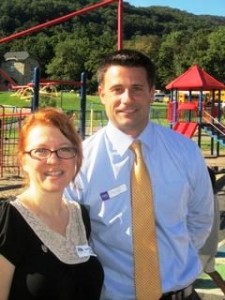 The event served as an unofficial welcome for Haldane’s new Elementary and Middle School Principal, Brent Harrington, who used the occasion to address the crowd warmly, stating that, “The transition has been absolutely fabulous.  I’d like to thank the whole administration, with special thanks to Julia Sniffen [Middle Assistant Principal] “¦Everything I believed about this community when I did my research has been proven true over the past few days.  I look forward to being here.” 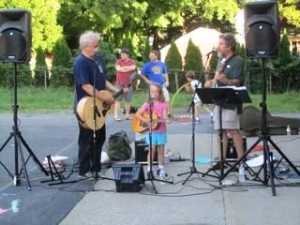 John Teagle and two generations of Hembergers strumming away

Throughout the three-hour long get-together, kids swarmed happily at the jumping castle and formed intricate hula-hoop chains, weaving around the more sedate children who were creating chalk masterpieces on the concrete.  Teagle and Hemberger, joined by Hemberger’s young daughter, provided the musical backdrop, later joined by Danilov on vocals. Parents milled around, chatting with teachers (including some from the high school) and enjoying the pleasant Friday afternoon.  The PTA hopes to make this Potluck an annual event. The Haldane PTA website has recently been overhauled and is just about to be rolled out in a new edition; look for it at http://www.haldanepta.org/.
Photos by A. Rooney