Depot Docs will screen Project Nim, at the Depot Theatre on Saturday, Nov.18 at 7:30 p.m. The 1970s project (by the same name) was arguably the most radical experiment of its kind, designed to show that a chimpanzee could learn to communicate with language if raised and nurtured like a human child. Under the auspices of a psychology professor at Columbia University, the chimp was taught the sign language of the deaf and it was hoped he would soon acquire enough words and grammar to tell his human handlers what he was thinking and feeling. If successful, the consequences would be profound, forever breaking down the barrier between man and his closest animal relative and fundamentally redefining what it is to be human. [CLICK HERE TO SEE MOVIE TRAILER]

Nim is clothed and taken to his human family’s large house on the Upper West Side of Manhattan to begin his new life. Within a few months, he is communicating his desires in sign language, all the while wrecking the house and seemingly intent on wrecking the human relationships within it. Cunning, mischievous and increasingly strong, Nim outgrows his first family and is then adopted by a succession of young female students who live with him in the Delafield estate in Riverdale, a large mansion then owned by Columbia University. 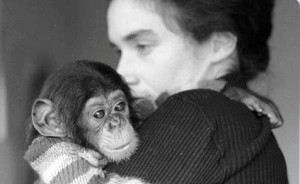 Nim’s animal nature continues to emerge strongly and, though often affectionate and playful, he can’t help but attack any human he perceives as weak. Bites become commonplace, and at the age of five, with a vocabulary of over 120 words, Nim’s spell in human society, with all the privileges that involves, is prematurely curtailed. The experiment is abandoned and Nim is taken back to the primate research center in Oklahoma to learn, the hard way, how to live amongst his own kind. With his communication skills intact, Nim does makes lifelong friends with some of the human staff and even gets to drink the odd beer and smoke the occasional joint with them. But the center is running out of funds and, within a few years of his arrival, Nim is quietly sold into medical research and to his fate in a small and isolated cage in a lab in upstate New York.

News of his predicament soon filters through to several members of his human “family,” who set about trying to free him, with the help of significant press interest and a maverick lawyer. The outcome is not what anyone involved expected. Nim is bought by a high-profile animal rights activist who takes him to his animal sanctuary in Texas. But, with no chimps or signing humans for companionship, Nim is left more isolated and lonely than ever and Nim’s human advocates must come to his rescue again.

The film combines the testimony of all key participants, newly-discovered archival film and dramatic imagery, to tell the story of one chimpanzee’s extraordinary journey through human society and the enduring impact he makes on the human characters he meets along the way.