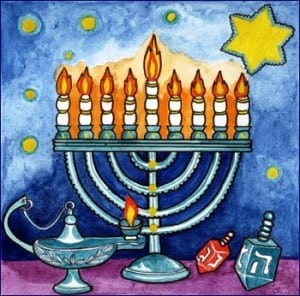 Chanukah begins the evening of Tuesday, Dec. 20. The Festival of Lights celebrates the triumph of light over darkness. Over 21 centuries ago, the Greeks (then rulers of the Holy Land) sought to forcibly Hellenize the people of Israel. The Maccabean leader Judah eventually led an army to not only liberate Jerusalem and the temple but reestablish an independent country. This revolution was not only to defeat the pagan Greeks but also to purge the corrupt temple Saduccean priests. This was the first war fought to defend monotheistic thoughts. The miracle of the oil was about the eternal flame on the temple court. Though the temple court had a menorah it was the eternal flame that lasted for eight nights.

At the heart of the Festival is the nightly menorah lighting. One candle is lit on the first night and an additional candle every succeeding night until the eighth night when all candles are lit. Chanukah customs include eating foods fried in oil, such as latkes (potato pancakes) and sufganiot (doughnuts.) Children play with dreidels (a spinning top) with Hebrew letters inscribed, using Chanukah gelt (chocolate coins). Gifts and real gelt are also given to the children.