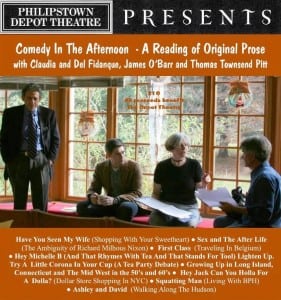 What began as short stories have evolved into comedic skits and monologues that will be presented at the Depot Theatre on Saturday, Jan. 7 at 2 p.m. The material, written by resident Del Fidanque, was originally conceived in a short story format but developed into comedic vignettes as other characters were included into the body of each piece. Accompanying Fidanque will be his spouse Claudia and local actors James O’Barr and Thomas Townsend Pitt.

The program, Comedy in the Afternoon, contains six skits and two monologues with varied subjects. They range from exploring how men feel when shopping with their wives and girlfriends (Have You Seen My Wife?) to what might happen when a couple walks along the banks of the Hudson River (Ashley and David).  A Tea Party debate finds one actor portraying Michelle Bachman as she argues with a Latino named Jesus (as in the Spanish pronunciation of the name). In the same piece there are also impressions of Herman Cain and the governor of Alabama. A skit about Dollar Store Shopping in Manhattan is introduced by Fidanque doing an impression of The Twilight Zone’s Rod Serling. In a biographical monologue about Growing Up in Long Island and the Mid-West the audience will have the opportunity to hear a little bit of George Burns as he fires Harry von Zel. In Sex and The After Life, a satire about Richard Nixon’s sexual experiences, Kissinger, played by O’Barr, offers encouragement and reassurance to Fidanque’s Nixon. In Squatting Man, Truman Capote laments about what he perceives to be David Mamet’s intolerance of men living with BPH (enlarged prostate.)  Admission is $10, with all proceeds to benefit the Depot Theatre. To reserve tickets, call 845-424-3900 or visit brownpapertickets.