Trustees voted to fill the vacant school board seat by appointment

When Dave Merandy resigned from the Haldane School Board after being elected to the Philipstown Town Board, School Board trustees were left with three options: leave the seat vacant; hold a special election; or appoint someone to fill the vacancy until the upcoming election on May 15. At their Jan. 3 meeting, School Board members decided to appoint a new trustee and invited residents to apply for the position.

Merandy had announced his intention to resign at a meeting in late December and his letter, formally confirming his departure, was accepted at the Jan. 3 meeting. The following day, a notice from the four remaining trustees was widely distributed, inviting residents to apply for the position by 5 p.m., Jan. 23. [CLICK HERE TO SEE NOTICE]

President Joe Curto outlined the Board’s options at the meeting, but there was little doubt which way the vote would go.  Curto said that while the seat could be left vacant, Mike Lambert, the Board’s attorney, advised that technically trustees had an obligation to fill the seat. Should the Board fail to do so, Curto said that the Board of Cooperative Educational Services (BOCES) Superintendent has the authority to appoint someone. That seemed to be only a theoretical possibility as Superintendent Mark Villanti said that he knew of no instance in which that step has been taken.

There was no interest in holding a special election, even though cost would be minimal – approximately $1,500 according to board clerk Kathy Marino. Trustees saw timing as the major issue. In order to provide the legally required public notice, a special election could not take place until mid March – just two months prior to the normally scheduled election. “A special election might have made sense if it was earlier in the year,” [2011] Trustee Mike Junjulas said, “… but at this time it would be a waste of funds.” He also expressed concern that with the Board having to deal with important issues such as the new budget very soon, a March special election was not appropriate. Curto agreed. “We really do need five [trustees],” he said. “Evan [Trustee Schwartz] was sick today and we had to scramble to have three trustees here tonight.” Vice president Gillian Thorpe said that having a trustee start earlier, “Would be a good jump start” with the appointee being able to learn about Board operations that much sooner. Curto said he had spoken to Schwartz who also felt a special election would not make sense and that he supported appointing the new trustee. 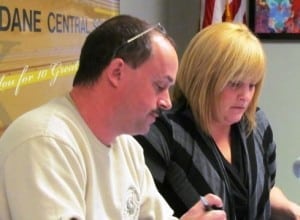 The three voted in favor of appointing a new member but reserved the right to conduct public interviews if necessary. The notice distributed on Jan. 5 states that they intend, “to appoint a new member on or about January 31.” The new trustee would then have to seek reelection in May.

“It’s a commitment,” Curto said. “It’s an elected position and some people don’t want the scrutiny. I can think of some people I’d like to approach – I can think of 50 – some here in the audience tonight.” Curto has expressed concern that the Board could include three new trustees after the May election. That is a possibility because he has said he won’t seek reelection, Merandy resigned and Schwartz must face reelection.

In other business it was announced that Merandy will be formally recognized at the Board’s Jan. 17 meeting, although it remains to be seen how formal an event it will be. “It will be fun. We’re going to bust his chops!” Curto said.

It was also announced that a public meeting would be held in the Haldane auditorium on Jan. 30 at 7 p.m. to hear the consultant’s report and recommendations for improvements to sports fields in Philipstown. Haldane participated in the study along with the Town of Philipstown, Village of Cold Spring and numerous local sports organizations.