Cold Spring residents go to the polls on March 20. They’ve had ample opportunity to hear what the three candidates running for two seats on the Village Board have had to say about their credentials, in part due to a pair of recent candidate forums. On March 8, at 69 Main St., Philipstown.info’s publisher Gordon Stewart moderated a freewheeling discussion  that was also streamed live and archived online. Four days later, The Putnam County News and Recorder (PCNR) followed suit, hosting a second candidates’ debate moderated by Editor-in-chief Doug Cunningham.  The latter saw incumbent Charles Hustis III and political newcomers Matt Francisco and Tom Rolston square off at the fire hall on Main Street.

The debate was lively and quite civil. Unlike some PCNR debates in the past, the time clock used to limit candidates’ response times was barely a factor with answers to Cunningham’s queries coming crisply and within the allotted times. The debate certainly did not lack variety. A broad spectrum of village issues was covered – from the Butterfield redevelopment project, the Fire Company and aging infrastructure, to how village meetings are run, consolidation of services and opinions on the future of three large tracts of village real estate.

In a concise opening statement, Hustis, a lifelong resident of the village said, “I’m charismatic, outspoken and I tackle issues as I see fit. I love this community…..we need to move forward.” Francisco and Rolston zeroed in on their experience and abilities. Francisco, who has lived in Cold Spring for nine years, said, “I’m not a politician,” and that he was running out of love for what he called “a very special place” that has preserved its heritage better than most Hudson River communities. He compared his career in operations and project management to the job of running a village. “I’m used to dealing with large capital budgets,” he said.  He said that projects have a finite number of dollars and that, “…with limited funds you can’t fix everything.” 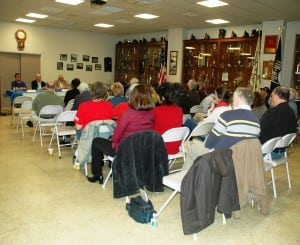 Rolston, owner of The Depot restaurant, said he has lived in Cold Spring since 1982 but has become increasingly involved in village affairs during the past ten years. “The challenge in a very small village is to keep our quality of life while keeping taxes low.” A self-described financial conservative who avoids unnecessary spending, Rolston said, “I’m also creative at finding ways to do things – without [using] taxes.”

Here is a brief sampling of the candidates’ comments on issues facing Cold Spring. Comments have been edited and condensed.

On redevelopment of the Butterfield site

Hustis: I like the planning board’s idea of a charette (public meeting). Get involved. If you like it – yahoo! Or if you don’t – speak your piece. We have to have tax positive options. It’s how you get there that’s the hard part.

Francisco: It could be a huge benefit to Cold Spring….but it comes with enormous risk. A charette would help tie things together and would be better than having the developer spend large amounts of money unnecessarily. Residents should attend the charette and voice their opinion.

Rolston: It should be a rateable…and should contain a lot of companies, rental spaces…to bring money into the village. It needs a charette so that we can say, “This is what we want.” I think Mr. Guillaro [the developer] wants some direction.

On the Village Comprehensive Plan as a guide for Butterfield development

Rolston: The Comp Plan is not the law until it is made the law by the village board.

Francisco: The Comp Plan is a policy document that has the force of law as I understand it.

Hustis: I agree with Matt. The Comp Plan is a set of guidelines. We should seek counsel for guidance. We have to think outside of the box.

Is there a danger that the developer might pull out of Butterfield?

Francisco:  There is always that risk with development. The wrong development is the greater risk. That land is valuable. Are we getting what we want? We want a fair, non-arbitrary process…it’s been a bit disjointed. With the Village now the lead agency for the project I hope we can get there quickly.

Hustis: I hope he doesn’t pull out. That building is an eyesore.

Rolston: We in Cold Spring managed to wear down two developers on the riverfront. Mr.  Guillaro stuck it out. Will he pull out? No. Will we frustrate him? Yes. We should frustrate him!

On the rocky relationship among the Mayor, Village Board and the Cold Spring Fire Company

Rolston: It’s a hot potato. I disagree with the mayor – I don’t know what he is trying to do. It’s a culture. As long as they are doing the job effectively – and at the right price – we should leave them alone.

Hustis: It was an unnecessary fight – a distraction. It was unfortunate that tax dollars were used. We want peace of mind about fire protection. We don’t want to fight.

Francisco: It was unfortunate. Keys can be a metaphor for control. I don’t have a fully formed opinion – but it needs to be looked at. There’s a need for bridge building, good communications.

On aging infrastructure – relining the water mains – and costs

Hustis: We have decrepit infrastructure.  If we could float a bond…that is where I’d seek information from financial experts. I didn’t vote for relining the mains because I didn’t have time to review all the information. I didn’t think I was doing the voters a service – I didn’t have enough time to make an effective decision.

Francisco: We already have a high tax rate. It has to be paid for with alternatives to taxes. Butterfield could bring significant revenue into the coffers. We need to work with Putnam County to get sales tax revenue.  My caution is that I don’t have enough information – when I have enough information that’s when I’ll start talking.

On how village meetings are currently run

Rolston: It’s ridiculous – the back and forth bickering and fighting. If I was on the board I would not let that happen. We need a parliamentarian.

Francisco: The obstructionism is at the level we see federally. Someone has to run the meetings, maintain order, get through the agenda.

On creating a more robust business environment
Hustis: Some regulations in the zoning code should be updated to match the times….especially parking.

Francisco: The first piece is to get residents to support tourism and local businesses.  And getting sales tax revenue from the county.  Also, what kind of low impact businesses can we attract?

Rolston: We went through this in 1986-87. It’s not the Village Board’s job to create new businesses. It’s job is to make the village accessible to business. There are few vacant stores now. We have six ice cream parlors though – that’s a lot! We should encourage the Chamber of Commerce and the Merchant’s Association to get businesses to come here. We make the laws.

On consolidating municipal services
Francisco: It often looks like savings on paper.  We need access to information. Where is the savings? If the Village Hall and police station are on Main Street but there’s another clerk needed at Butterfield – it chips away at the savings.

Rolston:  I’m a member of a buyer’s group. I save a lot of money because we negotiate with suppliers. Here, we have five judges, four building inspectors, two highway departments – one of them sitting on our most valuable property. Put the two villages together? I’m told it’s “a bad idea.” It’s a thought. We could consolidate garbage collection. It’s not effective now.

Hustis: We have to look at it in terms of what will residents gain? Do a dissolution study. And don’t support it if people will lose from it.

On the future of Dockside, Marathon and the Village garage
Hustis: At Dockside I’d like to see a second boat access, a floating dock and a seasonal concession. Uses that are good for the community. The Village garage – I’d hate to see it move and us waste two million dollars. At Marathon – a second garage and parking would be good – but we would need to do a traffic study.

Francisco: Dockside is an amazing space and should be kept open. It has the most beautiful view on the Hudson River. A seasonal concession would be great. Low impact, tax positive uses. At the garage site – a small hotel or institute. Marathon is tough.  If the price is right people will buy houses.  But it’s still a brown site. A difficult site to develop.  Parking could be good if accessible – it could be a bit of a bottle neck. We would need to do a traffic study.

Rolston: I didn’t like it when OSI took over Dockside – I loved that restaurant. I was upset. I’ve changed my mind though. It should have a boat dock, a small eatery and a park. The garage? Tear it down. Make it the gateway to a Cold Spring- Beacon trail. It’s a great idea – it would be a stabilizing factor. At Marathon build a live-work community.  Artisans such as glass bowers, artists – would live upstairs and have their shop downstairs. You could walk to Main Street.

Closing Remarks
Rolston: I think I’m the most qualified. I’ve been going to Village Board meetings for a long time. I know the village like the back of my hand. I have the credentials. I operate one of the business anchors. I have the people at heart too.

Francisco: I have a good skill set. I’m cautious – I don’t open my mouth until I have all the facts. What drives me is my passion for Cold Spring. We need tax positive development. The Comprehensive Plan is a guide. A charette for Butterfield is a beautiful example of a way of formulating community goals. We need the development.  We need a process that is fair – and not arbitrary.

Hustis: I like serving the community. I did it with the Lions Club and I think I can do it as a trustee. I march to my own drummer. I’ve learned a lot. It’s not easy sometimes – but I enjoy it. Please vote for me.
Photos by M.Turton