Exhibition space in Beacon is devoted to visual journalism 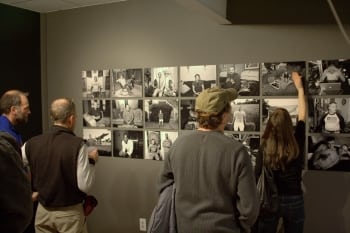 Opening reception for Fovea's Gays in the Military: How America Thanked Me exhibit, 2012. Photo by Peter McGiveny/Courtesy of Fovea Exhibitions

One of just a handful of exhibition spaces specializing in photojournalism, Fovea Exhibitions, now celebrating its fifth anniversary in Beacon, has a focused mission: to educate through visual journalism.

As a nonprofit, supported solely by private donors, grants and fundraisers, they are able to devote their energies to producing a range of education programs, panels and story-based exhibits without being impeded by the necessities of raising revenue through the sale of the work displayed.

Fovea, which refers to “a small depression in the retina, constituting the point where vision is most clear,” is entirely volunteer-run. It was begun in 2007 by Stephanie Heimann and Sabine Meyer, both photo editors with extensive professional backgrounds.

Heimann, who spent eight years living in Hong Kong and Moscow, worked as a photojournalist covering post-Soviet culture and the first war in Chechnya. Her freelance clients have included Newsweek, Fortune and Scientific American. Recently more focused on environmental issues, she was the photo editor for Al Gore’s book Our Choice.

Meyer has been a photo editor for the past 20 years, working for publications such as New York Magazine, Conde Nast Traveler and National Geographic Adventure, where for 10 years she was the director of photography. She has been teaching photo editing at the International Center of Photography (ICP) since 2004. Fovea’s advisory board contains members who work for the New York Times, Getty Images, Wall Street Journal, Newsweek and the ICP. 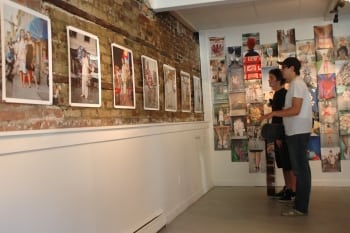 Fovea’s donors are worldwide, with sources as disparate as individual gifts sent from Russia and Argentina, to locals offering money and volunteer hours in support of the endeavor.

Fovea began as a concept when Heimann, then living in Brooklyn, decided to form a nonprofit with the goal of publishing a small magazine. After meeting Meyer, they shifted the idea to opening a gallery instead. In whatever shape, the mission was always to educate through photography, promoting an understanding of news and social events through the medium of photojournalism. This work was an extension of what they did and do professionally.

Heimann says Fovea “allows this genre of photography another venue for outreach besides print; here it can live longer than it does in, say, print magazines.”

In choosing and mounting the exhibitions, which can feature a single photographer’s work or the work of many based around a theme, Fovea​ “tends not to editorialize,” says Heimann, adding, “We simply try to organize it in a three-dimensional space.” Being able to include detailed caption information, Fovea is able to conceptualize every photo within a larger framework than print media usually allows for. 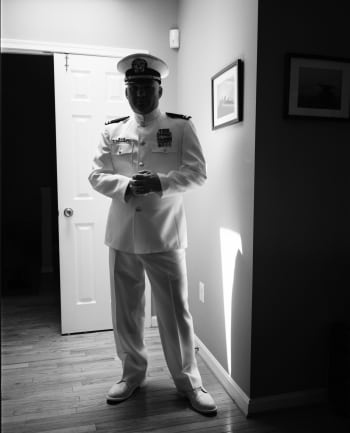 Image of Lt. Don Bramer from Fovea's Gays in the Military: How America Thanked Me exhibit. Photo by Vincent Cianni courtesy of Vincent Cianni/Fovea Exhibitions

Exhibits are further enhanced by reading materials, panel discussions, and, often visits from the exhibiting photographer both at the space and also at schools. Topics of previous exhibitions include children in rural South Dakota; post-tsunami Japan; the Iraqi refugee crisis; faith in America; Bosnian diaries; and the rebuilding of a New Orleans neighborhood.

School groups often visit, which Heimann says is great, because “it allows students to interact with the journalists without the journalists being edited.” One exhibit, Behind Bars, by Andrew Lichtenstein, toured to regional schools, some of which included large populations of students who answered in the affirmative to the question, “Do you know someone in prison, or who works in a prison?” The students’ shared history with the subject and subjects of the exhibit allowed for them to experience the images on a very direct and personal level.

The work exhibited is nearly all from colleagues of Meyer and Heimann. “It’s a very small, tight industry — everybody knows everybody,” says Heimann. Fovea gets a lot of requests, but because of limitations of resources, there are a lot of criteria involved in selecting the shows, which tend to stay up in the space for a few months each. Above all, “[the work] has to fulfill the mission,” says Heimann. “It has to be about a current event or social issues and has to be a serious documentary exploration of that topic.”

As an example, Heimann cites a recent exhibit, Gays in the Military, which photographer Vincent Cianni spent three years documenting. “We were very happy to get to premiere it here, and it has gone on to galleries in Boston and Chicago.”

Most of the photographers whose work is shown work with writers, and much of their work is self-funded, according to Heimann. “People do it for very many reasons, including a sense of documenting history. If money isn’t available they’ll do it anyway. That passion, drive and commitment is something we get to showcase. The reason for our existence is to promote the work of these people.” 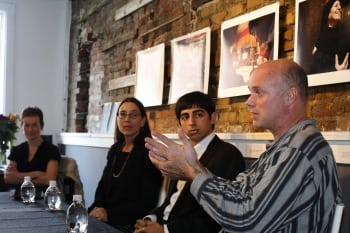 Fovea draws a mixed crowd of visitors and locals. The location, at the west end of Beacon’s Main Street, is handily the first gallery Dia Museum attendees hit when walking east. It is also a destination gallery in and of itself for those within certain circles. “For people working with NGOs, international humanitarian organizations, journalists — those people know who we are,” says Heimann.

Fovea’s current exhibit, which ends this Saturday night, is entitled Liberty and Justice (For All) and is a group tribute to the lives and work of photojournalists Chris Hondros and Tim Hetherington, who were killed in Libya in 2011. Each of the 65 invited photographers from around the world contributed an image from their archives on liberty or justice and wrote a text to accompany it. Heimann notes, “These first-​person witness essays illuminate more about the photos than just a caption; we love that here.”

Heimann describes Fovea’s next exhibit, One Earth, which opens on Aug. 19, as focused on “our planet’s conundrum: causes, consequences and traditions.” The exhibit is on view through Nov. 4, with a reception on Sept. 8.

Beginning this fall, Fovea will offer three photography classes, two for adults and one for middle-school-age students. Details on the classes, “The Art of the Photo Essay,” “Storytelling in Your Photographs” and “Beginning Traditional Photography” can be found at foveaexhibitions.org, which also includes virtual exhibitions of previous shows and videos of their panel discussions and much more. Fovea also has an in-house professional black-and-white darkroom available for rental. Fovea’s annual fundraiser will take place on Dec. 1 right across the street at Hudson Beach Glass.

Fovea is located at 143 Main St., Beacon, and summer hours are Friday through Sunday, noon to 6 p.m.; on Second Saturdays, including this Saturday, Aug. 11, the hours extend until 9 p.m.