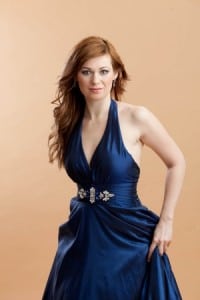 Shakespeare’s works have inspired much music through the centuries. His own plays are full of songs, and while the original music for these has been lost, later composers have created their own settings for them. His works have inspired operas from Purcell’s The Tempest to the later compositions of Bellini, Verdi, Rossini and Gounod, and on to the popular musicals of Cole Porter and Leonard Bernstein.

Inspired herself by these works and the nearby Hudson Valley Shakespeare Festival at Boscobel (where her husband, Stephen Paul Johnson, has been a regular performer for 14 seasons), soprano Gabriela Mikova Johnson, accompanied by local harpist Joy Plaisted and Czech pianist Tanya Vaneckova, will take an excursion through this repertoire during their concert at Cold Spring’s Chapel Restoration at 7:30 p.m. on Thursday, Aug. 23. Admission is free; donations welcome. Light refreshments will be available.

Mikova Johnson will soon start rehearsing for her role as Polly in the Depot Theatre production of John Gay’s The Beggar’s Opera, which opens its four-week run in October. Earlier this year, in conjunction with a recital Mikova Johnson performed at Boscobel, Philipstown.info profiled her. The following is an excerpt from that interview:

With its carpets of forests, castles, spires and medieval towns, the Czech Republic has long been associated with fairy tales, and there is indeed a fairy-tale quality to Mikova’s life as she relates it — a fairy tale filled with the requisite speed bumps and rewards. Born when her country was under communist rule, she was 10 years old when the government fell. Knowing early on that she wished for a career in opera, at age 14 she entered a six-year program at the Janacek Conservatory in Ostrava.

As she describes it: “Things were changing really slowly.  We were finally getting information from ‘outside,’ but our schools were still in disarray and our singing coaches weren’t great. I went into the Conservatory with a voice and came out without one in some ways, but I did study voice, piano and theory.” …

After shifting her focus to also include light opera and musical theater, Mikova found work in the city of Brno, performing Leonard Bernstein’s Mass with the Brno Philharmonic Orchestra and then traveling through Spain and Portugal with a production called Golden Broadway, “designed to amuse people during fiestas — we visited villages, all over. As part of it I had to sing a duet from Phantom of the Opera, which had a very high note, and I was worried about hitting it. A friend suggested I try a new vocal coach, this Russian singer. I thought ‘What can I lose? I can’t sound more horrible than I do now!’ ”

This coach led Mikova back to opera, re-educating her technically. Mikova was then hired as a soloist by a light opera company, located at ​​​​the Tyl Theatre in another Czech city, Plzen, “really great — wonderful roles, I liked the city and lived right near the brewery!” Her roles then provided her with some of the components of her current repertoire, works from Offenbach (Orpheus in the Underworld), Strauss, and the Czech-born operetta composer Rudolf Friml, including Rose Marie and The Vagabond King. …

For the next few years, Mikova continued with her engagement with the light opera theater in Plzen, where she had the leads in three or four productions each year, and, under the European system, was paid for a full year but had summers free. Those summers saw her journeying to the Hudson Valley, where her American boyfriend, Stephen Paul Johnson, was performing each season with the Hudson Valley Shakespeare Festival. …

Mikova says that coming to live in New York and essentially starting over again is not necessarily harder than the career path she was forging before, as “it’s hard in the arts everywhere. Unless you’re at the very top, it’s basically survival money everywhere. There I was performing but also teaching voice, traveling back and forth. As a teenager I wanted to sing at the Met, La Scala. Now, having done a lot of touring in Europe, I know it’s not so glamorous. I’m now more modest in my expectations, but, it’s a beautiful, rewarding job when it comes out right.”

To make it “come out right” here, Mikova has had to re-do the technique she learned from her Russian coach, heeding the advice of noted New York coach Gerald Moore, who has worked closely with Renee Fleming. …

In addition to a change in technique, Mikova has now had her range assessed as lyric soprano, as compared to her former category of coloratura (slightly higher).

“My coach tells me I should sing the character of my voice,” she says, adding: “It can be hard to find it. This is the experience of a lot of singers; finding that coach — the right coach — so many of my colleagues are desperate to. If you find your vocal character, you can stretch yourself later. … With good coaching there are so many opportunities here.”