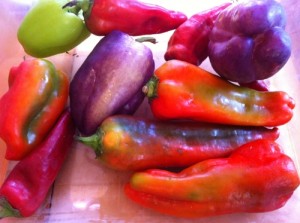 I bumped into an old friend on the sidewalk in Manhattan a few weeks ago. He has always radiated a certain cranky, intellectual despair, and this encounter proved no different. As we walked along together for a few blocks, he railed about the future of the planet.

His second child had recently been born, and, after describing in vivid detail the various grim handbaskets that we humans are driving ourselves to hell in, he clutched his skull, wondering aloud whether beloved Baby 2 should ever have been brought into this world. “What were we thinking?” he wailed.

As luck would have it, I have been feeling fairly optimistic of late, thanks not only to my own beloved kids, but also to the fact that my professional interests have kept me immersed in the world of sustainable food and farming for the past several years. Although the news for farms is not 100 percent rosy, it remains possible for anyone, anywhere, to have a positive impact, starting by simply shopping at a farmers’ market and feeding one’s children from the glorious haul. I recited to my friend a favorite old Joan Baez quote: “Action is the antidote to despair.”

I recalled that, back when we were teenagers, our peers believed that the only way to make our voices heard was to march on Washington. Though we stuffed ourselves onto buses and drove long distances to tromp around on the Mall, we were never sure that anyone was listening.

This past summer, nearly every young person I met (and I met quite a few) had spent time volunteering on an organic farm — some in places as far away as Ethiopia and Peru, others right here in the Northeast. Just by rolling up their sleeves and digging their hands into the dirt, they’d had a small but meaningful impact on major issues, from global warming to the economy.

I’m too old to take up farming, but I’m happy to support the people who do it, even if it requires me to roll up my sleeves and dig into an assortment of passed hors d’oeuvres while sipping a tasty cocktail. On Saturday, Sept. 8, Glynwood hosted its fourth annual Boot-Stompin’ Barn Dance Gala. I was there, and not just because I was on the planning committee. The more I’ve learned about food over the years, the more I care how it’s raised. I admire the work Glynwood does in support of small and midsize farms and feel it’s smart and pertinent and makes a difference.

A couple of years ago, I developed a recipe for red pepper-fennel soup to include in the gala gift basket. The plan was to give it to each guest along with the ingredients to prepare it. At the last minute, my recipe was set aside in favor of one created by an actual chef. But it’s so good that I continue to make it, several times a year. My kids, too, have come to crave it. It’s incredibly simple, and the proportion of ingredients can be adjusted according to what’s on hand. I like to make extra and bring some to work in a thermos. I imagine it might come in handy the next time I run into my anxious friend. “Here,” I could say to him. “Just taste this.”

The proportions of vegetables can be adjusted according to taste. And any combination of sweet peppers can be substituted for the red ones.

1-2 cups stock or water, depending on how thick you like your soup