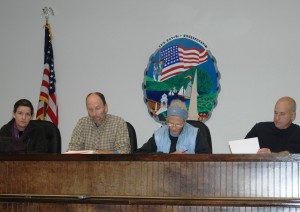 Voting 4 to 0, the Philipstown Town Board Wednesday night (Oct. 31) described the town roads as fit for use after Hurricane Sandy and urged the Haldane and Garrison schools to reopen promptly instead of remaining closed all week.

The board acted at a workshop meeting after the Haldane Central School and Garrison Union Free School districts announced their intentions to stay shut, given an ongoing state of emergency declared by Putnam County. “The Garrison School is required to remain closed until the state of emergency is lifted,” GUFS said on its website Wednesday.

In a resolution, the Town Board members stated that they had “determined that the roads in the Haldane and Garrison school district[s] are safe for travel by all vehicles including school buses and emergency service vehicles.” They asked the schools “to reopen for classes as soon as possible.”

The board members said they had consulted with the town highway superintendent, Roger Chirico, and emergency service responders before concluding that no reason existed to keep Philipstown schools closed.

The belief that schools must remain closed during a county state of emergency came into question at the board meeting. Shea said the schools’ rationale was based on the opinion of a school attorney, whose view is challenged by others. “There’s some confusion” out there, he said.

Not having school in session “is a hardship on working families,” Shea added. “Parents are missing days of work. And we’ve had roads in worse condition and school [underway]. When people got the call” about the schools’ continued closure, “my phone lit up,” he informed his colleagues. “People are saying, ‘What is going on?’”

He said that he had contacted County Executive MaryEllen Odell, who told him that the county neither had the power to shut schools nor wanted it.

“We recognize that the eastern side of the county is much harder hit than this side, but we also recognize that our roads are fine and that the kids need to get back to school,” Shea said. He said that he had also discussed the matter with Haldane Superintendent Mark Villanti and that a conference call of school officials was scheduled for Thursday, Nov. 1.

“We’re in good shape here. Unfortunately, the rest of the county isn’t,” Councilor Nancy Montgomery agreed. She and the other Town Board members acknowledged that difficulties continue in Philipstown for individual homeowners affected by flooding, damage, or power outages, but said that overall the town came through the hurricane well.

And the roads “are in as good a shape as they were prior to the storm,” said Councilor John Van Tassel.