Authenticity is overrated. When I was a kid, “Italian food” meant a big plate of spaghetti and meatballs. Then I grew up and discovered, along with the rest of America, that not only was spaghetti and meatballs not a genuine Italian meal (because genuine Italian people eat pasta as a first course, and serve meatballs all by themselves in autonomous bowls), but that there is in fact no such thing as Italian food. Instead, there is Tuscan food and Neapolitan food and rich, buttery pillows of food from the Alto Adige. 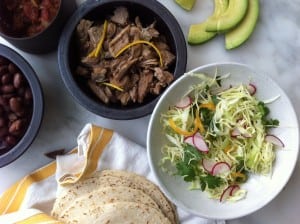 In the past decade, many people have endeavored to do the same thing with Mexican cuisine, celebrating the brilliant diversity of the culinary traditions next door. I am so grateful! From these pioneers, I’ve learned to add pulverized pumpkin seeds to stews, to make tomatillo salsa from scratch, and to grind up fragrant moles. Thanks to them, I now have a drawer full of dried peppers whose names I can’t keep straight, and I sometimes serve tacos (soft, corn) topped with shredded cabbage instead of shredded cheese.

But honestly? Old El Paso can make my heart do a little mariachi dance, too. Whenever we stay with our friends Jil and Eric, we look forward to taco night. It’s become a tradition: They lay out taco shells and tortillas, black beans, cilantro, salsa, guacamole, ground beef sautéed with one of those worrisomely tasty packaged spice mixes, lettuce, chopped tomatoes, and grated cheddar — the serving dishes alone nearly fill their long table — and we all make our own, trying out different combinations until we are too stuffed to do anything but lie on the sofa and watch movies until bedtime.

The Americanization of the world’s foods does not please purists. (My friend Lily grew visibly agitated when I made tortilla pie one day at camp last summer; “It’s so inauthentic!” she wailed before absenting herself from the kitchen.) But to me, the bastardization of ethnic foods is a rich culinary tradition in its own right, and it has resulted in some remarkably delicious dishes. Like, hello, spaghetti and meatballs? Easily one of the best meals ever invented. Closely followed by that disgustingly cheesy tortilla pie. 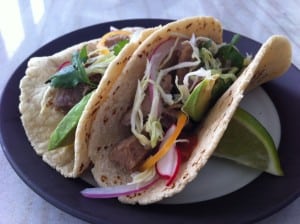 The good thing is that authenticity doesn’t have to be an either/or decision. You can have kung pao chicken one night, and ma-po tofu the next. And if they both taste good, who cares which is more truly Chinese? (In case you do, it is the latter.)

As a cook, I love making ethnic foods from scratch because it is a way to physically enter into another culture without the cost and bother of getting on an airplane. Following certain recipes is like learning the steps to a curious, foreign dance. But I am a mother and an improviser, too, and lord knows there are nights when time is tight and the kids are hungry, and I’ll genuflect before anything that tastes good in a hurry.

My buddy Kim Severson, a writer for The New York Times (and a mother herself), recently published a cookbook with her colleague Julia Moskin. It’s called CookFight, and it is structured as a series of challenges (“The Budget Challenge” is the name of one chapter; “The Weekday Challenge” another), for which each of them prepares a complete menu.

The recipes exemplify what is so wonderful about cooking in America right now: Recipes for dishes like Pho, a Vietnamese soup, or Pan Bagnat, a Niçoise sandwich, are every bit as smart, genuine, and accessible as those for cheese grits or spaghetti pie. From this book comes the pork carnitas recipe below. I served it the other night with cabbage-radish slaw, chopped avocado, and salsa for me and Peter (the radish, cilantro, and avocado salad from my July 1 column would make a good starting point; add some shredded green cabbage if you like), and I put out bowls of grated Monterey Jack cheese and sour cream for the kids. Together, we ate like happy citizens of this great, complicated land.

Adapted from CookFight, by Julia Moskin and Kim Severson (Ecco, 2012)

1. Trim any thick fat from the outside of the pork. Cut the meat into 1-inch cubes; discard any cubes that are pure fat.

2. Put the pork in a large pot. Add the water, bring to a boil, then reduce to a simmer. Skim off any scum that has formed on the surface. Add the remaining ingredients. Simmer for 1 ½ hours, or until the pork is very tender, adding more water if necessary to keep it submerged, and skimming off foam.

3. Season the pork with salt. Bring to a gentle boil and cook until the water has evaporated, about 30 minutes.

4. Cook the pork a little longer to fry the meat slightly, or cook it longer if you prefer crisper meat. Stir often and add a bit of water if the meat sticks or seems about to burn. Remove the bay leaves and cinnamon stick.

5. To serve, fold a few tablespoons of carnitas inside each tortilla and top with cilantro and onion. Serve salsa on the side.