There is a scene I have come to dread in every cook’s life story: the one where the protagonist tastes French food for the first time — real French food, the kind you have to travel to real France to eat. It is always a chorus-of-angels moment, and it inspires our hero to devote the rest of his or her days to creating food back home that tastes as sublime as it did in France.

Though, true, sometimes the setting is Italy or, these days, Singapore.

For me, such anecdotes have always been painful, like hearing as a teenager that all your friends’ first kisses were glorious, romantic events, while yours was an awkward negotiation of teeth and noses (“kiss” here quite possibly serving as a euphemism for something else).

Me? The first time I bit into genuine French food as a sentient young adult, I spat it out. 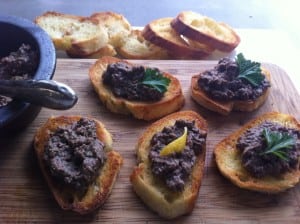 To be fair, I was 15, highly impressed with my own teenage opinions and disdainful of anything weird or gross. I’d been sent to France with my big sister to spend the summer with our father’s supercilious fourth cousins, starting in Paris then on the Brittany coast. Our first morning, Elisa and I woke late, jet-lagged, and stumbled downstairs to discover portable lunches neatly packed by our aunt, who lost no time in shooing us out the door towards the Metro. Off we went to take in the edifying sights.

At some point we got hungry, and sat down on the edge of a 19th-century fountain to unwrap our meals. Sandwiches, we found, on baguettes so brittle we feared we’d puncture our mouths on the crust-shards. More alarming was what lurked inside: gray paté and tiny pickles. The paté was a mosaic of sketchy-looking meat, fat-blobs, and gelée. And those pickles! Who would put whole, midget pickles on a slab of congealed meat pieces and call it a sandwich?

I still have a photograph of my sister’s face as she inspected hers. We picked apart the paté, eating the choice bits, and fed the rest to the carp who trolled the fountain. Then we bought hot dogs from a cart. The fact that they were safety-cone orange disturbed us less than the sandwiches had.

Before sunset on our first day in Paris, Elisa and I had learned to fend for ourselves, scrappily buying croques monsieur from street vendors and crèpes from cafes. We did not starve, bless us, and went on the have a brilliant July, hanging out at the beach with a gang of local Gitaine-smoking, Vespa-riding teenagers.

Looking back, I am not sure why those sandwiches were such an affront. We had grown up eating offal — liver, heart, tongue, kidneys. My mother had even started making paté herself, from a recipe she’d cut out of our Indiana-hometown newspaper. It contained equal parts chicken livers and cream cheese, and it was pretty darn good!

Perhaps I should have taken my boorish first encounter with French cuisine as a warning that a life in food was not for me. I did not. Indeed, I went on to make dozens of patés (which I should actually be calling “mousses,” since most of them are pureed and spreadable, rather than baked and sliced, but won’t). They are something I regularly crave, and I have collected numerous recipes over the years, some mere scribbled lists of ingredients from chefs. The velvety, French-style versions all contain a stick or more of butter; many call for cream as well.

They are for the holidays. The one I had a hankering for recently is Italian-style, inspired by Nancy Silverton of Los Angeles’ Mozza. It’s roughly chopped and full of such big, zesty flavors that it requires no pickles … though I always keep a few jars in the fridge these days, in case any choruses of angels come looking for me.

You can substitute un-smoked bacon for the pancetta. Both are easier to chop if you put them in the freezer for 20 minutes first.

1 tablespoon lemon juice (from about ½ lemon)

Olive-oil-brushed and toasted slices of ciabatta or baguette